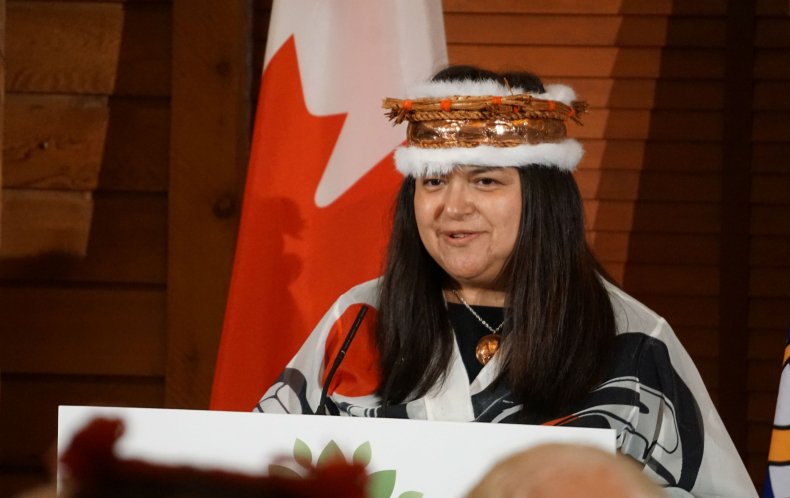 Heiltsuk leadership say the federal government put its reconciliation process “on thin ice” by failing to adequately consult Indigenous communities and collaborate with them in developing its Oceans Protection Plan (OPP). They voiced concern after the government announced on Thursday the winner of an open competition for a $67 million three-year contract.

Bidders were informed at a conference in late February that Aboriginal content accounted for one per cent of the evaluation criteria. Hereditary chief Harvey Humchitt​ said he found this totally unacceptable.

“In an age of supposed reconciliation, the federal government should be embarrassed that they would give such little weight to the involvement of Indigenous peoples,” he wrote in a news release written by the Heiltsuk Tribal Council early Friday morning.

Public Services and Procurement Canada (PSPC), on behalf of the Canadian Coast Guard, issued a request for proposals (RFP) on February 5, 2018, for the lease of two vessels capable of towing large ships and responding to vessels in distress.

“The contract is for the provision of vessels for the next three years,” wrote Fisheries and Oceans Canada (DFO) as it shared the news. “The two leased vessels will be operated by Atlantic Towing Limited personnel, along with members of the Canadian Coast Guard, off the coast of British Columbia. One will patrol a northern area in Canadian waters between Alaska and the northern tip of Vancouver Island, and the other a southern area including the west side of Vancouver Island and the Strait of Juan de Fuca. Both vessels will be on-site in late 2018.”

The news hit the Heiltsuk Nation hard — a nation that has based its livelihood and culture on the Pacific northwest coast for tens of thousands of years, whose community that bears the burden of the worst impacts of tanker traffic, oil spills and are among the first responders in emergency situations.

The Heiltsuk Tribal Council had also submitted a proposal for the emergency towing vessels. In May, they announced a joint-venture with an industry partner they felt confident shared the same values and could offer their coastal community top-of-the-line marine safety.

The nation was informed of the rejection of their bid through a formal letter by PSPC on Thursday. Shortly after hearing the news, Heiltsuk chief councillor Marilyn Slett told the National Observer that she was majorly concerned about the lack of consultation and collaboration with Indigenous communities throughout the process.

In an email response on Aug. 14, PSPC Media Relations confirmed that the threshold for Indigenous participation in this contract was set at a minimum of one per cent.

"This was determined following consultation with industry and stakeholders through the Request for Information process, an analysis of the marketplace, and consultation with other federal departments," wrote Pierre-Alain Bujold. "The Aboriginal Participation Component can be met through means such as subcontracting for goods, services or materials, or the employment of Indigenous persons under the contract. This Component aims to produce long-term benefits for Indigenous businesses and persons in Canada."

Chief Slett said she finds this method of consolation and collaboration with Indigenous communities inadequate.

“The federal procurement process needs to be modernized to reflect the evolution of reconciliation and the stated wishes of government to involve Indigenous communities,” Slett wrote. “Reconciliation has to move beyond talk and to tangible results.”

“Canada has decided to maintain the status quo,” Chief Slett shared in the council's news release, “and spend over $[67] million on aging vessels from an east coast company with minimal experience in Pacific waters.”

National Observer contacted Atlantic Towing for comment about their experience working with Indigenous communities and working on the Pacific coast, but the company did not respond in time for publication.

How it all began

November, 2016, the federal government of Canada launched its $1.5 billion Oceans Protection Plan (OPP) dedicated to improving marine safety and offering new possibilities for Indigenous and coastal communities. The announcement came sandwiched between two important events- a devastating diesel spill in Heiltsuk territory and federal approval of the Kinder Morgan Trans Mountain pipeline expansion, which is opposed by the majority of Indigenous communities along the pipeline expansion route.

Indeed, just weeks following the government announced its largest investment ever made to protect Canada's coasts and waterways, it announced approval for the Trans Mountain expansion. It's a project the government expects to take over later this year after agreeing to purchase the existing pipeline system and some related assets for $4.5 billion. Documents revealed this week suggest the cost could run as high as $9.3 billion.

The government refers to the OPP to address critics concerned with an increased risk of pipeline ruptures, increased oil tanker traffic, and the expansion of Alberta’s oil sands.

One of the most important objectives of the $1.5 billion OPP was to strengthen partnerships with Indigenous communities, the prime minister announced in November 2016. This meant launching co-management practices, building local emergency response capacity and investing in oil spill clean up research and methods, he said.

The Heiltsuk Nation would have heard the announcement for the OPP while in the midst of containing a diesel spill from a 10,000-tonne tanker barge unit that ran aground early morning of October 13, 2016. The Nathan E Stewart tug-boat spilled over 110,000 litres of diesel fuel, lubricants and heavy oils into a 14,000 year-old village site and food-harvesting spot. The community waited hours for marine response, and when it arrived, there was chaos, confusion and inadequate equipment available.

Following the catastrophe, Heiltsuk Tribal Council Chief Marilyn Slett said “the incident highlights the desperate need Indigenous-led marine response on the central coast." A year later, on November 15, Heiltsuk Tribal Council released a report, based on decades of research, calling for immediate action, including the development of an Indigenous Marine Response Centre.

On February 5, 2018, when the Government of Canada issued a Request for Proposal (RFP) to solicit bids for the release of two emergency response vessels capable of towing large vessels and tankers and to respond to vessels in distress- the Heiltsuk didn't hesitate to submit a proposal.

They joined forces with Horizon Maritime in a partnership, called Heiltsuk Horizon Services Ltd. They proposed to deploy the industry-owned emergency response vessels, work with the Coast Guard and engage their community in a cadet-training program.

"It's a unique partnership that combines the nation's local expertise with industry experience," Chief Councillor Marilyn Slett had told National Observer at the time. "It's an opportunity to support on-the-ground reconciliation."

Horizon Maritime, based in Dartmouth, N.S., is a Canadian company that develops and supports offshore vessels, crew training, tugs, barges and workboats for open ocean projects.

But PSPC did not select Heiltsuk Horizon Services Ltd., a decision chief Slett said she could make peace with, if the resources went towards a comparable offer. But she remains skeptical of Atlantic Towing's past environmental record and ability to involve the First Nations communities most impacted by marine activity.

“We, as a coastal First Nation, bear the risks from shipping traffic in the Pacific, and it’s time that the federal government does more than pay lip service to the importance of its relationship with Indigenous peoples,” said Slett. “As far as we’re concerned, Canada’s reconciliation process with Heiltsuk is on thin ice. We need to start seeing tangible results for ocean protection and respect for Heiltsuk’s leadership role in protecting and managing our waters.”

When reached for comment, PSPC referred National Observer to its online announcement to answer questions related to the RFP process and government decision to award Atlantic Towing. When asked for clarification about what set Atlantic Towing apart from other proposals, PSPC said they would be in touch as soon as possible.

In the announcement, Fisheries and Oceans Canada wrote, “in collaboration with Indigenous peoples, local stakeholders and coastal communities, the Government of Canada is creating a world-leading marine safety system that provides economic opportunities for Canadians today, while protecting our coasts and waterways for generations to come.”

In response to a second question, PSPC referred the query to Transport Canada, and said it will respond as soon as possible to questions regarding how much funding remains as a part of the Oceans Protections Plan, as well as how the funding will be spent.

This article was updated at 2:30 PST on Aug.14, 2018 to include Media Relations comments from PSPC.

Government would appear to