Statue of John A. Macdonald removed from Victoria City Hall in act of reconciliation 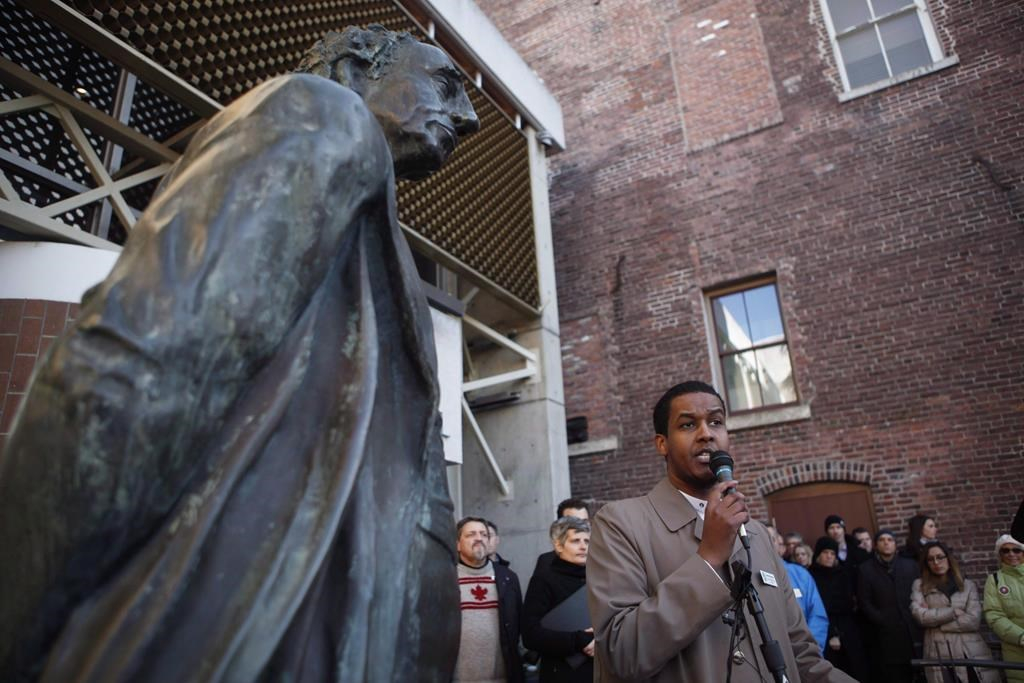 The statue of Sir John A. Macdonald overlooks the Imam at Masjid Al-Iman, Ismail Mohamed Nur, speaks during a vigil to honour the victims of a shooting at a Quebec City mosque, in Victoria on Tuesday, January 31, 2017. File photo by The Canadian Press
Previous story

A statue of Canada's first prime minister has been removed from the grounds outside Victoria City Hall, days after the city council voted to remove it.

The city began discussions in 2017 to remove the statue of Sir John A. Macdonald as part of the reconciliation process with the Songhees and Esquimalt First Nations, voting seven to one Thursday to have it removed.

Songhees Chief Ron Sam wrote in a July 31 letter to Victoria Mayor Lisa Helps that removing the statue is an important step in the city's path toward reconciliation.

Minutes from the council meeting say the statue will be stored in a facility until the city determines what to do with the statue, adding they were not trying to "erase history."

Supporters and protesters alike were visible at city hall carrying placards and signs, while some protesters wrapped themselves in Canadian and British Columbian flags and sang the national anthem.

Macdonald played a significant role in the creation of the residential school system that displaced thousands of Indigenous youth, and served as the MP for Victoria from 1878 to 1882.

Halifax mayor speaks out against removal of Cornwallis statue from park

It's a symbolic act only, but

It's a symbolic act only, but an important one nevertheless. We can't have reconciliation if our colonial view of history is so set in stone that the negative acts of our founders have to be ignored. If the removal bothers us, we should perhaps read some history, and think empathically about what it means to the survivors of residential schools to see one of the architects of them, so publically honoured.

We can use this historic decision to learn more about our actual history, and promise ourselves that we will do better by our fellow Canadians in the future. Progress is possible after all.

Having listened to a CBC

Having listened to a CBC radio interview with Victoria Mayor Helps, I can honestly say "CONGRATULATIONS for exercising REAL reconciliation!!!"