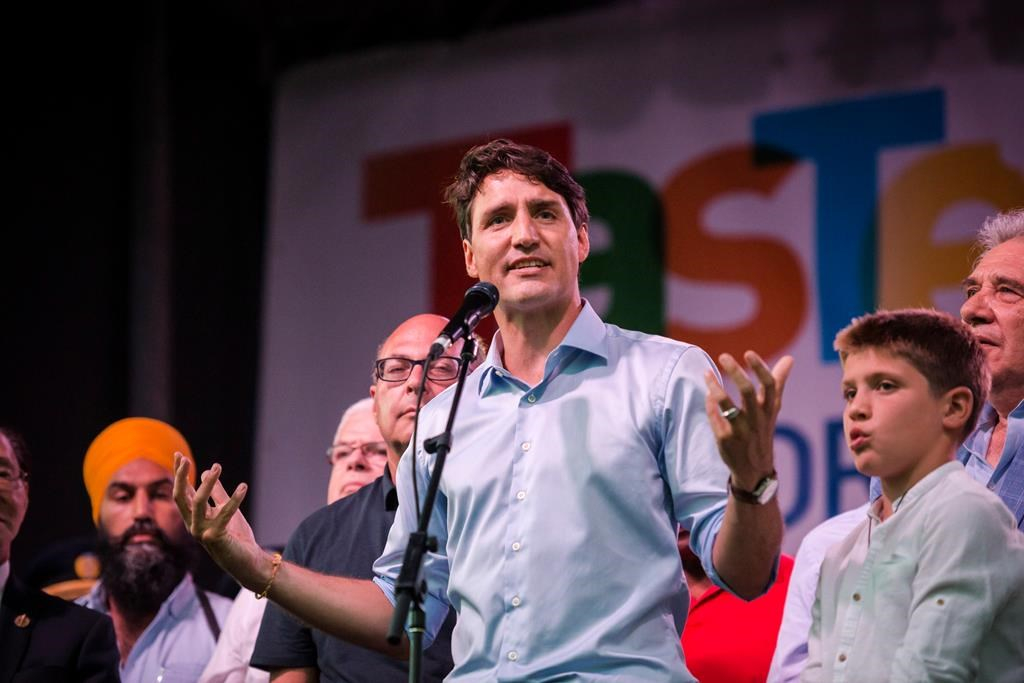 Prime Minister Justin Trudeau delivers remarks on the first day of the Taste of the Danforth street festival in Toronto, on Friday, August 10, 2018. Photo by The Canadian Presss/Christopher Katsarov
Previous story
Next story

Prime Minister Justin Trudeau honoured the victims of the Fredericton shooting during a visit to Toronto's Greektown — the scene of another rampage last month — to help open a popular street festival.

"There is a great town a few hours east of here, our friends in Fredericton who are going through a very, very difficult night," said Trudeau. "If we could all send them our best love and our best support for our fallen officers, who are there protecting us, and the people who died in a terrible tragedy."

Trudeau then thanked first responders who aided victims of the mass shooting in Toronto.

The annual "Taste of the Danforth" celebrates the popular neighbourhood's many restaurants and diverse food and drink offerings.

It was on Danforth Avenue that a man opened fire on July 22, killing 18-year-old Reese Fallon and 10-year-old Julianna Kozis, and wounding several others before turning his gun on himself.

It remains unclear what motivated the shooting, but the suspect's parents have said their son suffered from severe mental illness.

The opening of the street festival included a minute of silence and acknowledged the efforts of first responders, as well as the many others who rushed to help the victims.

"Tonight we also remember two extraordinary young women, Reese and Julianna who were out for ice cream...and got taken from us," said Trudeau." It was a terrible tragedy that effected us all deeply, we all hugged our loved ones a little closer that night and for the following days."

The prime minister said the opening was a moment to celebrate and remember the victims and to also remember what makes the Danforth great.

"We pull together as a community," he said, with his eldest son Xavier standing at his side. To Trudeau's left was a patio area with a sign that read "Reese Fallon died in this square July 22/18. Others shot here, lest we forget! Please think of them in this beer garden."

Tattoo shop owner Tanya Wilson was also honoured on stage, as she treated some of the injured in her store after the shooting. Wilson wiped away tears while waving to the crowd.

Singh told the gathering they were there to celebrate, but also to remember a "terrible tragedy."

"When acts of violence and tragedy strike us, they seek to divide us. They seek to scare us and to move us away," he said. "In response, and in a very Toronto way, we've come back in big numbers."

Tory also spoke to the size of the crowd, saying that he was "heartbroken" the night of the tragedy but was happy to see thousands of people show up in the days after to show support.

"You've been there ever since and you've been here this weekend, and you will continue to be here because we are not going to let these things push us off the fact...that this is the greatest city in the greatest country in the world in which to live," Tory said.

Tina Pandovoulos and her son Peter Pandovoulos both watched the opening ceremony. They've lived in the Danforth area for decades and were wearing #DanforthStrong buttons as they stood at the intersection of Logan and Danforth Avenue.

Tina said she had been to Danforth Avenue almost every night since the shooting, and hadn't missed Taste of the Danforth since it began.

"I'm never scared, I love it, and I'm going to keep coming," she said, adding that seeing politicians from different stripes on stage together to remember the victims gave her a good feeling.

"That makes me cry when I see everybody there on stage...I'm feeling very proud," she said.

Organizers say the weekend "Taste of the Danforth" is expected to draw more than a million visitors despite the shooting — a far cry from the 5,000 who attended the first festival 25 years ago.

Since the festival began in 1993 it has expanded beyond just food to include music, dancing and various other forms of entertainment — and this year's will feature a benefit concert for the shooting victims.

Three memorials that include flowers, cards and other items that sprang up in the aftermath of the shooting have been relocated to a nearby site.