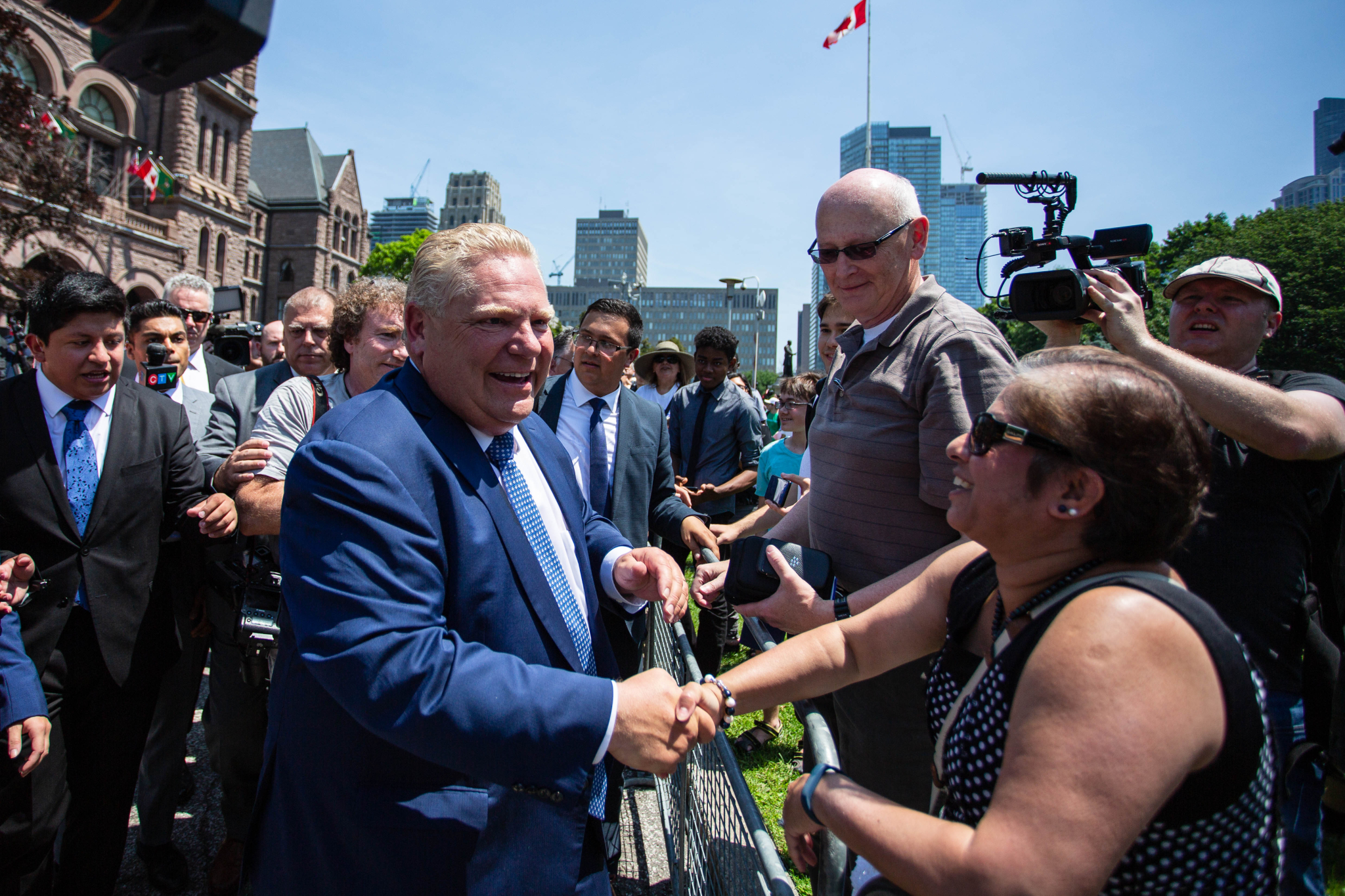 Premier Doug Ford walks into the crowd to shake hands to supporters after the swearing in ceremony at Queen's Park, Toronto, on June 28th 2018. Photo by Photo by Alex Tétreault
Previous story
Next story

Ontario's month-old Progressive Conservative government leveraged its majority position to pass a controversial bill to cut the number of Toronto city councillors from 47 to 25, with only ten weeks to go before the next municipal elections take place.

“We have 25 MPs, 25 MPPs and we’re going to have 25 councillors,” Premier Doug Ford said in the legislature on Tuesday, emphazising how Bill 5, also named the Better Local Government Act, was set to align the number of wards in Toronto with the number of provincial and federal electoral districts. The legislation would also cancel the elections for regional chairs in Peel, York, Niagara and Muskoka.

The bill came as a surprise to many residents and MPPs when it was introduced over two weeks ago. They noted that Ford never mentioned issues with the city's governance before Ontarians decided to send him to Queen's Park with a majority government on June 7.

The new legislation also leaves municipal electoral candidates and residents scrambling to understand what happens next as campaign lines and districts get redrawn with a new map.

In the legislature, both Ford and Ontario Municipal Affairs Minister Steve Clark have said the new legislation would help the provincial government achieve their promises to reduce taxes and waste, and create a more efficient government.Both Clark and Ford have municipal government experience: Ford served four years as councillor at Toronto City Hall and Clark was mayor of Brockville for nine years. Both have cited the "dysfunction" of city council in legislature.

With the passage of the Better Local Government Act, our legislative session has ended for the Summer. In less than two months, our government has already delivered on many key promises, while making significant progress on others. #onpoli

The legislation is the last bill adopted in a short summer session that allowed Ford's government to put his own stamp on a range of provincial policies that mostly reverse decisions made by the previous Liberal government of former premier Kathleen Wynne. These include a decision to cancel about 750 renewable energy contracts as well as the scrapping of a pilot program that provided low-income households with a minimum income.

The legislative process for the Toronto bill was shortened at each stage: the bill was not sent to a legislative committee of MPPs, which also allows public input, as is common practice and debate time was reduced on Tuesday.

But Tories erupted with thunderous applause on Tuesday after adopting the bill with a 79-31 vote.

The legislature subsequently adjourned until MPPs return on Sept. 24.

'A blatant abuse of power'

NDP Leader Andrea Horwath and other critics of the bill have said Ford has launched an affront to local democracy and disrespected the city's residents. Under a 25-member council, each councillor would represent an average of almost 110,000 people in the city, causing many to worry that many communities' voices may not be represented by local government.

“The premier just can’t rip up the election rulebook," Horwath said in legislature on Tuesday. She​ called the legislation “a blatant abuse of power,” adding that the it was "about an insecure and vindictive premier looking to settle scores and control local democracy."

Liberal MPP Mitzie Hunter said the legislation is “unconscionable” in the way that it came about, noting that the Ford government said it would allow public consultation on the new (and also controversial) sex education curriculum, but not on the issue of the size of city council.

“It is a sad day,” she said, echoing a sentiment conveyed by all opposing members of the bill, which included all the NDP and Liberal MPPs as well as Mike Schreiner of the Ontario Green Party.

I just voted against the second and third readings of Bill 5. It is an abuse of power that undermines representation and local democracy. I am disappointed that the Ford gov has forced it on the people of Toronto, Niagara, Muskoka, Peel and York. #onpoli #topoli

Hours earlier, in a courtroom down the street from Queen's Park, Rocco Achampong, a lawyer and city council candidate, was seeking an injunction against the bill, arguing that it should not be applicable for the 2018 municipal elections.

Achampong said he plans to argue that the legislation breaches the basic democratic rights of electoral candidates and voters and violates the unwritten constitutional rules of democracy and rule of law.

“This is the kind of stuff you would expect from emergent democracies that are new to the voting process,” Achampong told reporters outside the courtroom about the legislation upturning an election campaign that began in May. Achampong, who previous ran as a mayoral candidate and PC provincial candidate, said that he was prepared to make the whole election about the legislation. “The City of Toronto’s election at this point borders on being illegitimate and not being fair.”

A Superior Court judge ordered that his case be heard on Aug. 31. The date was set after the judge took note that Toronto City Council would be holding a special meeting on Aug. 20 to hear recommendations on whether or not to take legal challenges against the legislation. If the council decides to do so, these arguments will be heard alongside Achampong's on Aug. 31, as will any new challenges that may be filed before than.

A decision is expected shortly after that hearing about whether the legislation can cut the number of wards for the upcoming election.

'Its going to be years before any real work is done'

Jennifer Arp, a Toronto District School Board trustee and city council candidate for Eglinton-Lawrence is focusing on keeping the momentum going in her campaign and making sure the city elects "the strongest council possible, because we don't know what the next four years will look like based on (the Ford government's) first month."

"Ultimately, we’ve seen an attack on our city," she said.

The tone of the campaign has also changed, Arp noted. Even those not opposed to a smaller council size are upset about the way it has come about. "Since the announcement it's very much been outrage at the government and what we can do as a community to ensure we still have strong local representation if there are only 25 councillors."

As a member of the TDSB, Arp noted that the biggest challenge ahead would be restructuring local governance entirely. When the new council starts in December, she said more discussions will occur about how best to create committee meetings and task forces to oversee a city as large as Toronto than actually address local issues of housing, inequity and so forth. ​

"I don’t know what the current council will do in anticipation of that," said Arp. "There’s a lot of outstanding looming questions that need to be addressed at council about their own governance, which I know the Doug Ford government hasn't considered. He's not just throwing an election into disarray but an entire city into disarray. Its going to be years before any real work is done. How does a council of 25 people address the needs of a city a size of Toronto?"

She said it seems like Ford is "punishing the city of Toronto."

Nick Tsergas, lead organiser of the #ResistFord movement, said he is "hoping for the best but planning for the worst."

He has several campaigns in the works, including a letter writing campaign directed to Ontario's Lieutenant-Governor to directly intervene and halt the bill's passage. Him and his team of hundreds of candidates are also supporting the city and Achampong in any legal pursuits. In the event that Achampong's legal pursuit or the city's possible legal injunctions fail, the movement looking into the legal basis to sue the government for damages and losses in the form of a possible class action.

"I think all of this will be important legal precedent that says premier can’t act like dictators," Tsergas told National Observer in an interview.

"​This isn't about the idea of cutting council versus not cutting council. This isn’t about whether government should be bigger or smaller," he said. "What this is about is a premier trying to interfere in an election, and it doesn't matter what party you support, it doesn't matter whether you voted for that premier or like his ideas. Messing with an election is never okay." ​

Fatima Syed is an investigative reporter based in Toronto. Don't miss her next story: use the promo code FATIMA today and save 20% on your annual subscription to National Observer.​

This is the age of spite.

This is the age of spite. Ford and Trump and the extreme right have not shown any concern about how to create and sustain their world. They seem to have the capacity to pursue whatever will secure their position and nothing more. But like Trump, Ford and Hitler there is an army working behind them, invisible to the general public, creating the conditions which enabled their rise to power. Collapsing narratives that make human nature appear to be shallow, ignorant and greedy. Myths about how to sustain dominion over others through extreme inequality and cruelty. When humanity is led to believe this is all we have, we go mad, reason is trashed and we simply fall into the violence of revenge and blame others when it doesn't create the world of justice we grieve for.