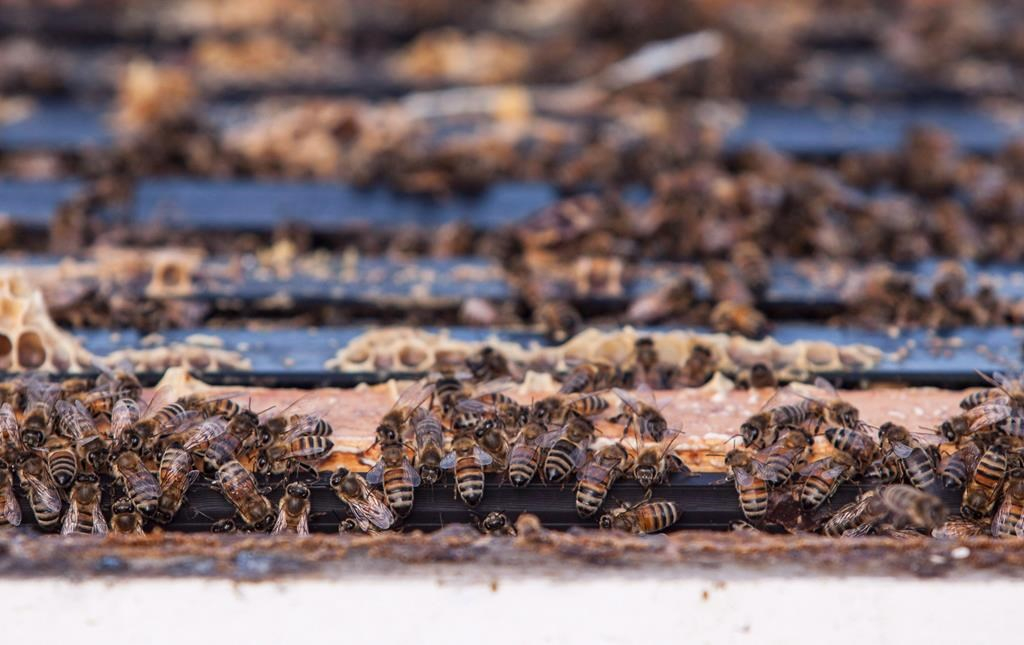 The federal government will begin phasing out the outdoor use of nicotine-based pesticides beginning in 2021, part of an effort to stem the mysterious decline of honey bee colonies around the world.

The Pest Management Regulatory Agency of Canada will announce Wednesday a three-year phaseout of two of the three main neonicotinoid pesticides currently approved for use in the country, sources close to the decision tell The Canadian Press.

The agency has already announced plans to phase out the third pesticide in all outdoor uses, meaning it can't be sprayed or used to pretreat seeds before planting.

Neonicotinoids, or neonics, are a class of pesticides used by farmers and hobby gardeners alike to manage pests like aphids and spider mites. Scientists blame the chemicals for weakening bees, making them more susceptible to disease and bad weather.

Wednesday's decision will mark the completion of nearly six years of work by the agency, and follows a similar ban by the European Union that takes effect at the end of the year.

Environmental groups say they are glad to see Canada moving ahead with a ban, but say five years is too long for the full ban to take effect.

"This is a really huge decision," said John Bennett, a senior policy adviser at Friends of the Earth Canada.

Health Canada is breaking from what the U.S. Environmental Protection Agency is doing, Bennett noted — an unusual move, considering Canada and the U.S. are normally in lockstep on such decisions and the reviews in both countries were a group effort.

While the EPA has yet to fully announce its decision concerning all applications of neonics, the U.S. Fish and Wildlife Service last week lifted an existing ban that prevented their use in wildlife refuges.

Bee colony collapses began occurring in substantial numbers about 15 years ago and studies linked those deaths to mites and neonics. A task force at the International Union for Conservation of Nature last year updated a comprehensive review of more than 1,100 peer-reviewed research studies on neonicotinoids and concluded there was no doubt they harm bees.

The bees are hit by neonics when they fly through dust clouds left behind as the pesticides are sprayed, or by consuming nectar from treated plants. Their loss represents a significant issue for food sources, since about one-third of food crops require pollinators for production.

In July, the Canadian Association of Professional Apiculturists reported almost half of the bees in Ontario died over the winter, while across Canada about one-third of all bees perished in the unusually cold winter.

Jim Coneybeare, president of the Ontario Beekeepers Association and a beekeeper in southwestern Ontario, said a decade ago or longer, an extreme cold winter like the one in 2018 would have elevated losses but "we wouldn't have experienced what we did."

He said neonics are not the only thing hurting bees, but they do play a role.

Coneybeare said he keeps about half of his hives in areas where neonics are not in heavy use and those hives experienced only a 10 to 15 per cent loss. The hives in the areas with more neonics saw losses upwards of 65 per cent.

Beekeepers who lose more than 20 per cent of their bees must split hives and buy new queens to make new colonies — a costly step that limits honey production until colonies recover. With so many bees across North America dying, finding queens is also getting harder, beekeepers say.

The ban has been too long in coming, said Coneybeare, adding he doesn't understand why it will take five years to be fully implemented.

Two years after the next

Two years after the next federal election, they're going to START the phase-out? Sure. In 2021, the government of the day will dismiss this promise as "plans of the previous government," and it will be business as usual for pesticides.

“The mysterious decline of

“The mysterious decline of honey bee colonies around the world” is only a mystery if you ignore the science and believe the crap peddled by the hugely profitable pesticide manufacturers!

If we wait until 2021, there may be no pollinators left to save. These pesticides should be eliminated NOW!

Again Trudeau reneges and places industry before environment. What is the excuse for postponing the ban?

Why wait....is there a best

Why wait....is there a best before date on these poisons?

By Michael Biesecker | News, US News, Politics | August 10th 2018
State Of The Animal