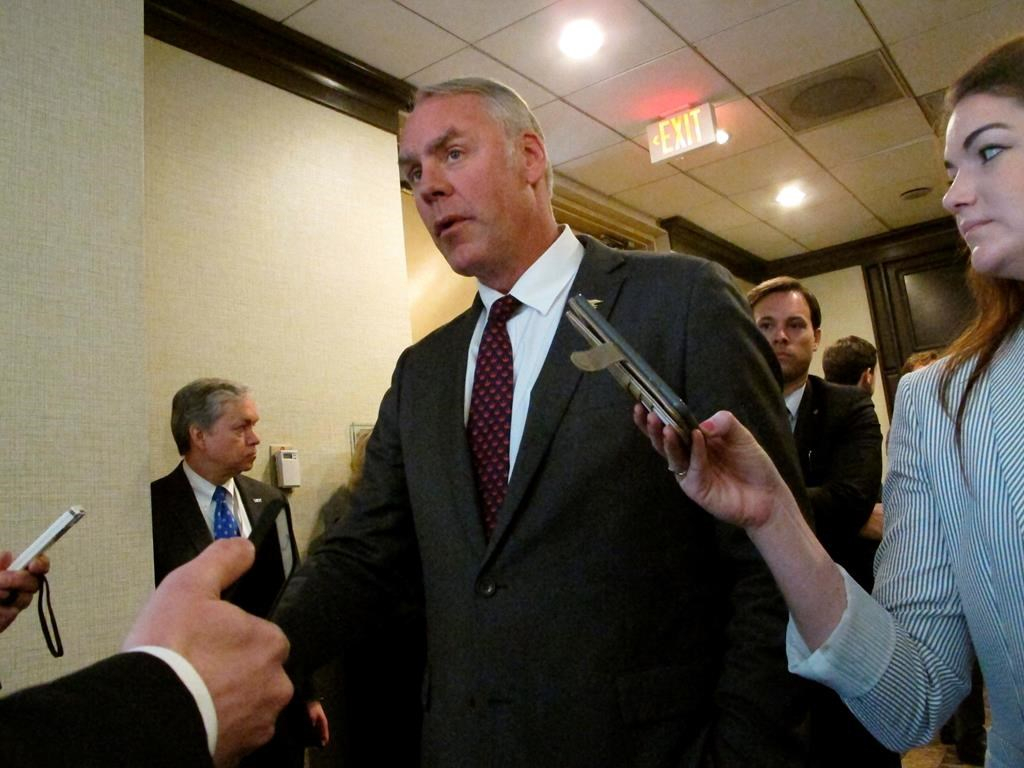 Interior Secretary Ryan Zinke, a card-carrying member of climate change skeptic Trump administration, told a local TV station Sunday that climate change has nothing to do with the dozens of wildfires currently ravaging the west, and particularly the state of California, where blazes have churned through 1,000 square miles so far in what has already been the most destructive fire season on record.

Instead, Zinke placed blame on “extreme environmentalists” for the conditions that led to the state’s historic fires this year. “America is better than letting these radical groups control the dialogue about climate change,” Zinke said in an interview with KCRA. “This has nothing to do with climate change. This has to do with active forest management.”

Zinke’s latest statements were a continuation of his criticism of environmental groups efforts for limiting logging in a recent op-ed in USA Today. “Every year we watch our forests burn, and every year there is a call for action,” Zinke wrote. “Yet, when action comes, and we try to thin forests of dead and dying timber, or we try to sustainably harvest timber from dense and fire-prone areas, we are attacked with frivolous litigation from radical environmentalists who would rather see forests and communities burn than see a logger in the woods.”

“Researchers do attribute the recent fires in part to forest management strategies, and moves to inhibit naturally occurring wildfires that previously helped maintain an ecological balance in forests,” the Guardian reports. “Fire suppression has left forests dense, dry and primed to burn [but] [s]uch policies [-] were put in place to protect the timber industry."

It's insulting that these

It's insulting that these fruitloops figure they don't even have to make up decent lies any more. It's worrisome that the media is in such a terrible state (present company excluded) that they're basically correct.

Our either -or thinking is

Our either -or thinking is partly to blame...but so is our penchant for quick and dirty. Thinning the forests would be a good idea. Susatainable logging is a good idea as well.

But Zinke is a typical black/white thinker.....which means he's not much of a thinker at all. Feller bunchers clear cut everything easily reachable with machines...and that includes riparian areas....slopes leading to rivers and steams. Climate change deluge type rains wash the thin soil into those streams and rivers, silting up reservoirs and ensuring that nothing will grow on many of those clear cuts in the next century.

If I understand what I've read recently, much of those dense forests in need of thinning are in areas not easily reached by big machines......the trees are spindly....and dead in part because of the pine beetles that warm winters encourage.

Our forests are burning, and the fires are more virulent to a great extent because of climate change. Industrial logging is not a solution for that, but one small part of the problem.

Everywhere industrial capitalism rips, strips, and ships...leaving the land more vulnerable to the heavy rains, searing heat and periodic droughts exacerbated by climate change. Industrial farming is essentially no different...it exploits, rather than husband, arable land for maximum profit, leaving the soil depleted and more subject to droughts and deluges....over the long term.

The weather is changing......dramatically. By now, everyone should know that. Including this Republican nincompoop.

Our old business models aren't going to save our necks.

More comment, please, on the ways in which this rejection of rational, evidence-based thought closely mimics that displayed wherever fascism surfaced in 1930s Europe .