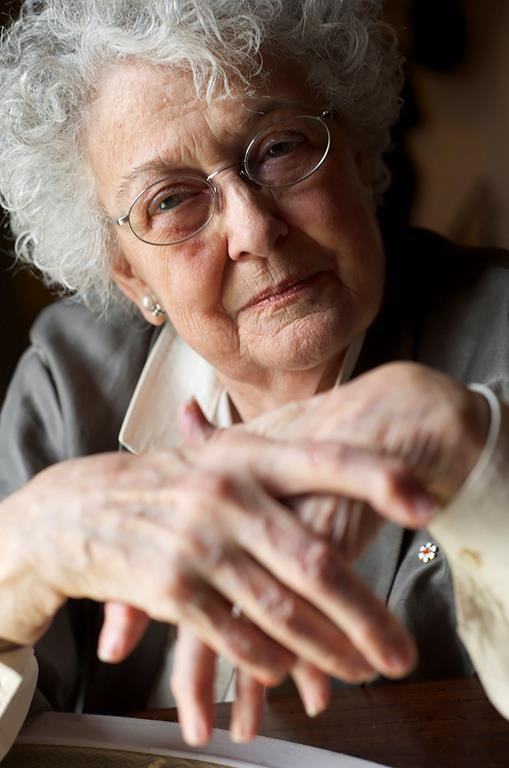 For East Coast painter Mary Pratt, a master chronicler of the wonders and woes of domesticity, a pile of grapes could contain "the secrets of the universe."

Pratt had an eye for the multitudes contained within the minutiae domestic life: the fleshy moguls on an uncooked chicken leg; crimson tin foil crackling under the heft of a blood-stained fish; the seductive sheen of Jello on a silver platter.

Featured in galleries across Canada, the Newfoundland-based artist won international acclaim for imbuing household artifacts with striking, if at times unsettling, realism.

And in the wake of her death Tuesday at the age of 83, curators say Pratt's still-life paintings will enshrine her singular, subversively feminist point of view in the art world and beyond.

"She has changed the way that we view our lives outside the gallery space," said Mireille Eagan, curator of contemporary art at The Rooms art gallery in Pratt's hometown of St. John's.

"As we are preparing a meal, as we are wandering through a living room and we see light throughout a vase, we will be reminded to stop and to cherish both the sadness and the beauty of that experience."

Born Mary West in Fredericton in 1935, Pratt studied at Mount Allison University in Sackville, N.B., under Alex Colville and Lawren Harris, the son of the famed Group of Seven Painter.

She married fellow student Christopher Pratt in 1957 and moved with him to rural Newfoundland in 1963. As her husband's reputation as an artist grew, Mary Pratt raised her growing family in between brushstrokes.

Projecting the image on to a canvas, she would render the tableau with obsessive attention to light and colour, suffusing it with the joys and disappointments of being a wife and mother.

In the mid-1970s, Pratt suffered the devastating loss of twins at birth, her children said in a statement. She also dealt with the turmoil of an "intense and complex marriage," the children said, and the couple eventually split, although they reconciled later in life.

"Her ultimate impact is that she showed us the beauty and the sadness of our daily lives," Eagen said, her voice cracking with emotion. "The impact of the artwork, long after she has passed, will resonate with people because of that."

With her depictions of domesticity, Eagen said Pratt was also sending a subdued political message about the prescribed roles for women in the home and in art.

Jonathan Shaughnessy, a curator at the National Gallery of Canada, said in the past, a critical bias against supposed feminine fixations meant that Pratt was not always given due recognition. But the cultural consensus has since shifted, he said, in no small part thanks to Pratt's perseverance.

"She brought these subjects into the foreground of art," said Shaughnessy. "That's why she should be recognized, even if it's also the reason she hasn't been as recognized as she could have been."

Among her litany of artistic achievements, Pratt's children said she was most proud of being named a Companion of the Order of Canada in 1996 and her role in establishing The Rooms.

In a 2015 interview, Pratt told Shaughnessy that she has received letters from homemakers who felt forgotten, but said her paintings gave them encouragement to persist with their domestic duties.

"It made them feel a little more like heroes than they had thought before," Pratt said.

Everyday objects contain "many little tiny truths," said Pratt. As her brush sculpted out cracks and crevices and found the hidden hues, she said didn't paint her subject; she made it.

Her art was not autobiographical, she said, but a way to possess "little gems of reality" forever.

"I think with my work, even things that are ordinary, are not ordinary," she said. "I think everything is complex and worthy of ... a closer look."