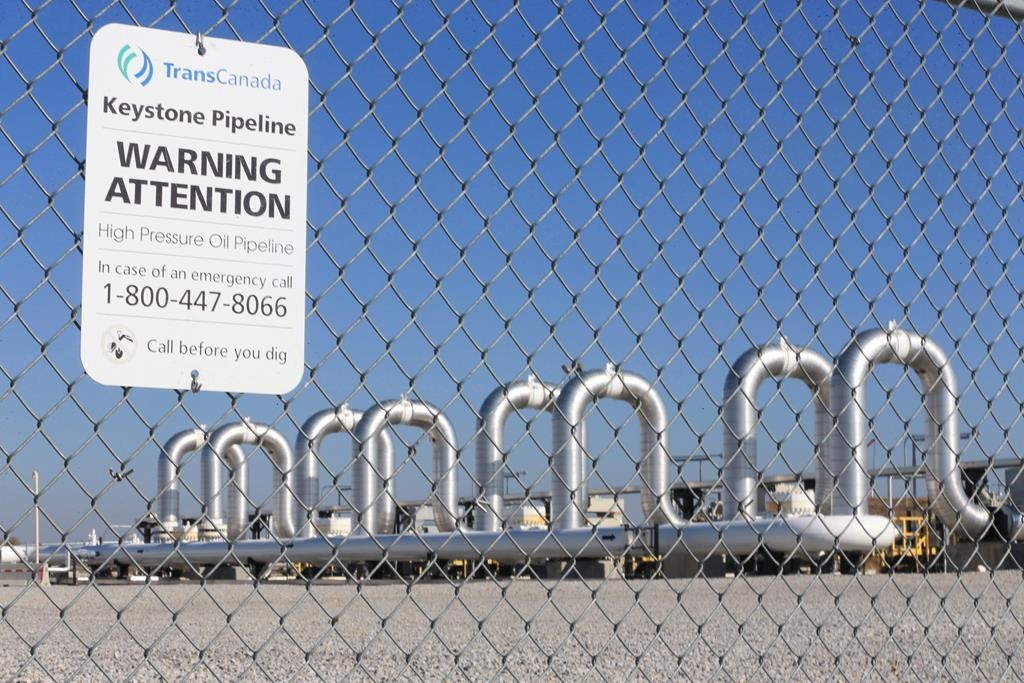 The Keystone Steele City pumping station, into which the planned Keystone XL pipeline is to connect to, is seen in Steele City, Neb., on Nov. 3, 2015. File photo by The Canadian Press/AP/Nati Harnik
Previous story

Potential delays in the completion of the Keystone XL pipeline following a U.S. judge's order mean that Western Canadian oil producers could suffer current price discounts for a longer period of time, an industry spokesman says.

The potential setback illustrates how difficult it has become to relieve market access woes that have resulted in larger-than-usual price discounts for Western Canadian crude, said Chris Bloomer, CEO of the Canadian Energy Pipeline Association.

"We need the pipeline, we need it yesterday and we need more market access across the board," he said in an interview.

"We're not getting a fair price for our crude in the U.S. because of a lack of capacity. That's just fundamentally an issue."

The difference between Western Canadian Select and New York benchmark West Texas Intermediate crude was about US$25 per barrel on Wednesday, down from peaks over US$30 earlier this year but higher than historic averages in the mid-teens.

Crude-by-rail exports from Canada reached an all-time record high of 199,000 barrels per day in May, up from about 131,000 bpd in May 2017, despite higher costs and a poorer safety record than pipeline shipments, Bloomer pointed out.

The U.S. lawsuit was brought by plaintiffs including the Indigenous Environmental Network and Northern Plains Resource Council after Nebraska state authorities approved an alternative route to the one TransCanada had proposed through the state.

The groups argued the U.S. State Department violated several acts in issuing a presidential permit for the pipeline without a proper environmental assessment of the changed route, but the judge rejected their request to revoke the permit issued by Donald Trump soon after he took office last year.

TransCanada spokesman Terry Cunha said the company was studying the ruling and had no immediate comment.

Environmental groups cheered the decision and called for TransCanada, which has not officially sanctioned the project, to abandon it.

"Today's ruling is a victory for clean water, climate, and communities that would be threatened by the Keystone XL pipeline," Sierra Club senior attorney Doug Hayes said in a news release.

"This proposed project has been stalled for nearly a decade because it would be all risk and no reward, and despite the Trump administration's efforts, they cannot force this dirty tar sands pipeline on the American people."

Two other export pipelines, the expansion of the Trans Mountain pipeline being sold to the federal government and Enbridge Inc.'s Line 3 pipeline replacement, also face uncertainty.

In 2017, Canada's oil supply was 4.2 million bpd, which exceeded existing available pipeline capacity, according to the Canadian Association of Petroleum Producers.

Would someone please explain why the price of Canadian oil goes down, ie a larger discount, when the supply goes down. This is not normal economics.

Hmm...could it mean no one

Hmm...could it mean no one wants the dirty tar goo? ;)