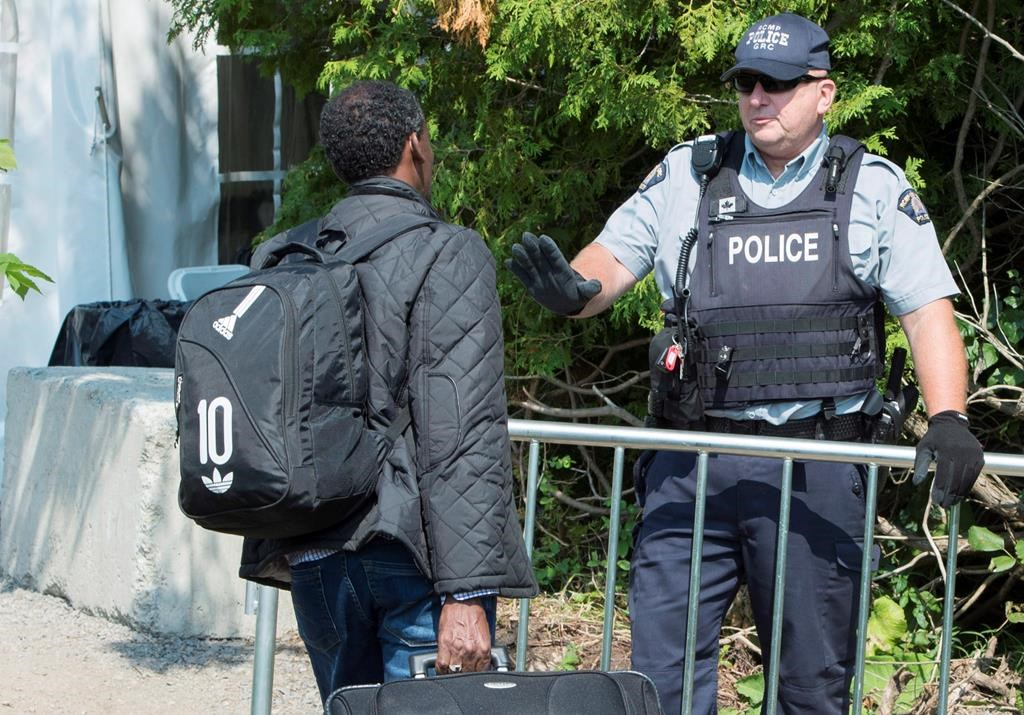 An asylum seeker, claiming to be from Eritrea, is confronted by an RCMP officer as he crosses the border into Canada from the United States on Monday, August 21, 2017 near Champlain, N.Y. File photo by The Canadian Press/Paul Chiasson
Previous story
Next story

Canadians are generally supportive of current immigration levels, a survey of public perceptions commissioned by the federal government suggests — but they are also worried and confused when it comes to the issue of asylum seekers.

The study, conducted in March by the polling firm Ipsos, solicited the opinions of newcomers, established immigrants living in Canada and the general public through a series of focus groups, as well as surveys conducted via telephone and online.

It was commissioned, with a price tag of $245,000, by Immigration, Refugees and Citizenship Canada as part of ongoing research to gain a better understanding of the attitudes of Canadians toward immigrants and the federal government's immigration programs.

Most participants said they believe immigration has a positive effect on Canada, on the country's economic prospects and on "shaping Canada's cultural mosaic," the study found.

Some respondents, however, expressed doubt about the fairness of the system, considering the influx of people who have been entering Canada at unofficial border crossings since 2017 in order to apply for asylum.

A perception exists that so-called "irregular" migrants are exploiting the system to get express entry into Canada and that security procedures are being compromised as a result, the survey found.

Few had heard of the Safe Third Country Agreement — a treaty between Canada and the U.S. that blocks visitors from seeking refugee protection at an official port of entry. Those who enter elsewhere are able to apply once on Canadian soil, prompting thousands to make the crossing at unofficial entry points — primarily in Quebec.

A fact sheet was provided to study participants "addressing the myth of asylum seekers as queue-jumpers" and explaining more broadly the process for dealing with irregular migrants.

Some said the information helped their understanding of the situation — but others were unmoved.

"Some participants, particularly those in the newcomer groups, questioned the legitimacy of those making asylum claims, the suggestion being that these individuals could simply be exploiting a loophole to expedite eventual immigration processes," the study states.

Concerns were also expressed about the impact of immigration on Canada's social safety nets, such as social services, as well as public safety and job security.

"Given the obvious penchant by the general public and immigrants who have come in through traditional channels to single out refugees and asylum seekers for what is wrong with immigration, it is essential a tailored approach to communicating the benefits be considered," Ipsos recommended.

Immigration Minister Ahmed Hussen's press secretary Mathieu Genest said the research is part of ongoing conversations with Canadians to help the federal government better understand how the work they are doing is being received.

As for the concerns about asylum seekers, Genest blamed the Opposition Conservatives for fostering those fears.

"This research made clear that the Conservative campaign of disinformation is having an effect on Canadians," Genest said.

"Whether it was the claim that 400 people (a day) would be crossing the border over the summer, when the numbers were actually ten times less, or the claim that asylum seekers were jumping the queue when they knew it was false, it is clear that the old tricks out of the Harper playbook are sowing confusion among communities."

Conservative immigration critic Michelle Rempel took exception to Genest's claims, as well with the fact the study characterizes as "misconceptions" the views of those who oppose the government's approach to irregular migration.

"The government here is telling Canadians — and a lot of new Canadians — that their sense of what is fair and what is not fair is wrong," Rempel said.

"There is a new permanent entry stream into Canada that the government is facilitating, and I think a lot of Canadians are looking at that — many new Canadians, many Canadians with permanent residency or who have come recently and are trying to sponsor family — and are saying, 'This is not fair.'

"Why are family members having to wait so long when (irregular border crossers) can have expedited work permit processing and housing?"

As part of the study, several messages were tested that government could use to promote immigration to Canadians.

Based on the results, Ipsos recommended that the government focus its communications on the economic and cultural benefits of immigration to Canada to address concerns about Canada's capacity to accommodate more immigrants.

Rempel called the study a costly exercise in government spin and a waste of taxpayer dollars.

"I actually think it's really dangerous because we should be managing how we do immigration properly, not trying to spin it one way or the other."