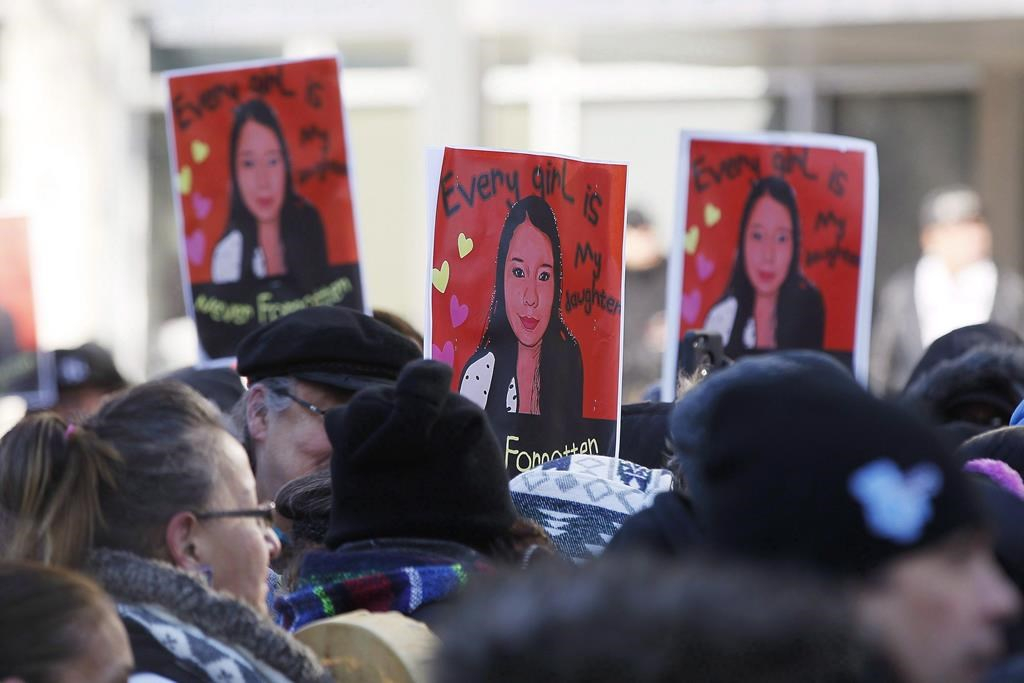 Family and supporters of Thelma Favel, Tina Fontaine's great-aunt and the woman who raised her, march in Winnipeg on Friday, February 23, 2018. File photo by The Canadian Press/John Woods
Previous story
Next story

Melissa Stevenson was just starting her career 18 years ago when a summer position at the Indigenous Family Centre in Winnipeg connected her to a youngster named Tina Fontaine.

The social worker quickly became close with Tina and about a dozen other young kids who came to the program.

"The family centre in the North End, it's like one big community," said Stevenson, 37.

For about five years, the children — most of whom were siblings or cousins — would converge on the centre each summer. But as time passed, tragedy would strike the close-knit group over and over again.

In 2007, the body of 17-year-old Fonessa Bruyere was found on the outskirts of Winnipeg. Her murder is still unsolved.

In 2011, 15-year-old Clark Stevenson was stabbed to death by another youth.

Four years ago, Tina's 72-pound body, wrapped in a duvet cover and weighed down by rocks, was pulled from the Red River. In February, a jury acquitted Raymond Cormier in the 15-year-old's death. That sparked rallies across the country.

Another murder left the small group of family and friends utterly devastated.

Last year, 29-year-old Jeanenne Fontaine, Tina's cousin and a mother of three, was shot dead. Her body was found in her home which had been set ablaze. Three men have been charged.

"When you hear the statistics, you don't really put two and two together … but a personal story like that, where four out of a dozen kids (are killed), look at the statistics on that," Stevenson said.

"Four of a dozen kids will not make it given the way things are right now — the racism, the foster-care system, all of the systems that are continuing to fail."

On the first anniversary of Jeanenne Fontaine's murder, two of the children who have grown into adults, Angel and Rose Fontaine, wanted to hold a smudge. Five members from the childhood friendship group gathered at the centre where they used to spend their carefree summer days.

They prayed, shared food, drummed and supported each other.

The group has picked up a few other members. Some are family but others are people from the community who also need to heal. No one is turned away.

As it came closer to August and the fourth anniversary of the discovery of Tina's body, they decided to host a special potluck.

In a post on Facebook, Katie Fontaine said everything is done in cycles of four to honour the four directions. The anniversary marked "a time to usher in healing for our family."

"A feast brings community together so they can help you heal."

Stevenson isn't sure what the future is for Tina's surviving relatives. For now, they will continue to meet every month to offer each other support.

She hopes it will grow into a larger movement like the Bear Clan Patrol, a neighbourhood watch group that started after the girl's death.

"It's nothing special — just showing support to each other, being there, using your time and your skills, being a good helper. I'm doing things that an auntie would do, checking on people, making sure they are OK," Stevenson said.

"We can't wait around for someone to help us. We just have to use the tools that we know — smudging, drumming, sharing, sharing a meal."

Thanks for this Kelly.

Thanks for this Kelly. Breaks my heart. But these kids, these survivors, God bless them. They are embodying the Great Spirit "using the tools they know."