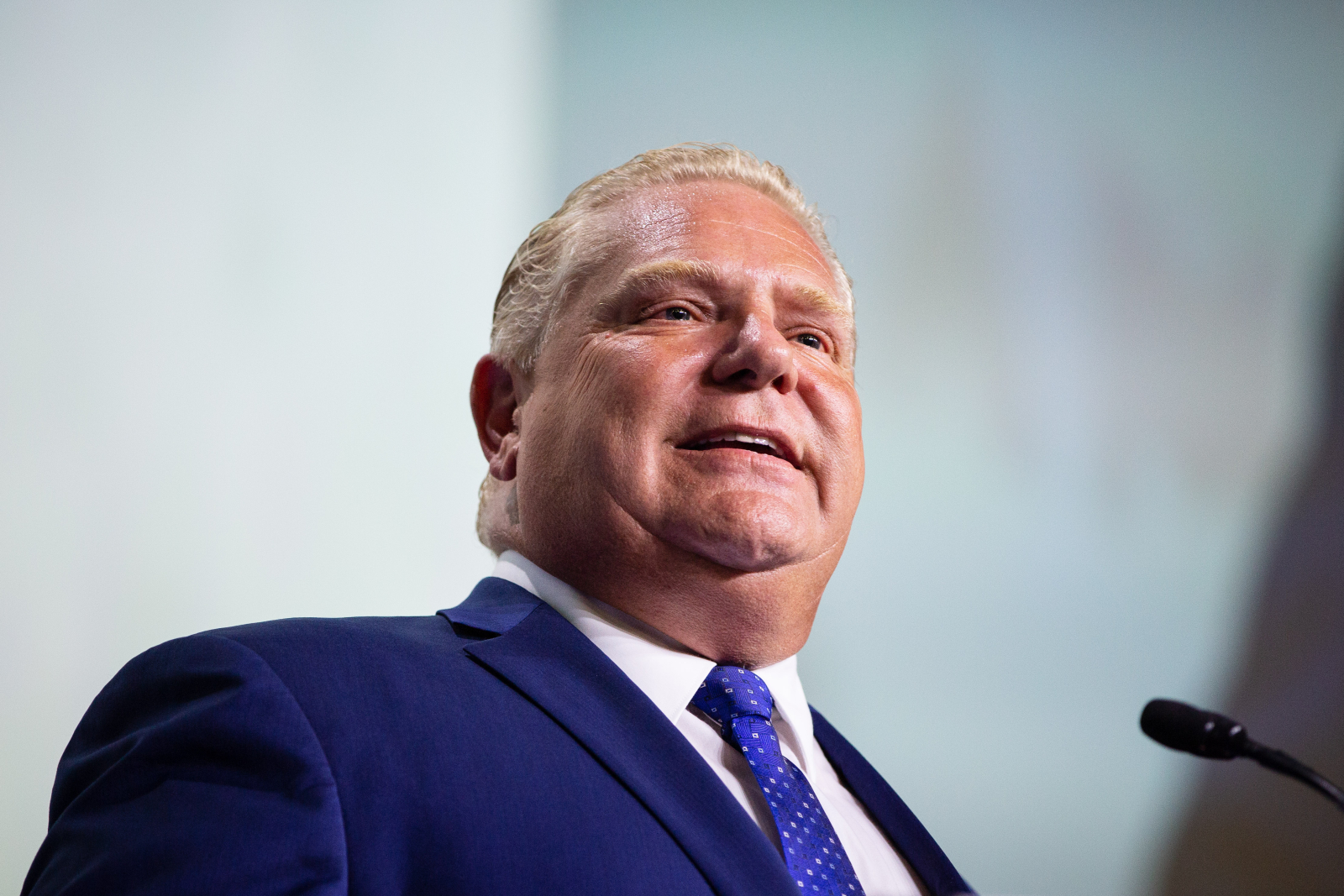 Ontario Premier Doug Ford speaks to the Association of Municipalities of Ontario at the Shaw Centre in Ottawa on Aug. 20, 2018. Photo by Alex Tétreault
Previous story
Next story

Ontario Premier Doug Ford drew applause from the province's municipal leaders on Monday in Ottawa as he touted his early record in office and dodged accusations of "meddling" in democracy as if he were the head of government in a developing country.

He also broke with tradition for political speeches in Ottawa by not acknowledging the Algonquin territory he stood upon, failing to say a word in French to a bilingual city, and leaving without taking any questions from reporters who showed up to cover his remarks.

But as Ford himself might say: a new day has clearly dawned in Canada's most populous province.

The premier was in town to speak to the Association of Municipalities of Ontario, a group that considers itself the non-partisan voice of 444 municipalities across the province.

During his speech, he ran through some of his government’s legislative accomplishments since taking office: cancelling green power projects, taking the cannabis retail model private, and killing off regional chair elections in Peel, York, Niagara and Muskoka while cutting down Toronto city council.

As usual, he reserved his greatest vitriol for some environmental initiatives of the previous government. The provincial Liberals led by former premier Kathleen Wynne, he said, “decided to ram these wind and solar farms into the backyards of communities that didn't want them.”

"And then, to add insult to injury, they forced hydro ratepayers to hand over their hard-earned money and subsidize the insiders who got these contracts,” Ford continued.

"In fact, the Green Energy Act is the largest transfer of money from the poor and middle class to the rich in Ontario's history.”

The green energy legislation was introduced to help provide an economic solution to climate change, a global phenomenon that is harming the world's poorest people the most.

Ford got applause when he mentioned putting an end to the White Pines Project, as part of cancelling 758 renewable energy projects, which he called “unnecessary” and said he had saved “$790 million” as a result of cancelling.

Ford did not mention his government’s declaration that it would abandon Ontario’s price on pollution. His government adjourned its whirlwind summer legislative session last week without adopting the bill to kill cap and trade.

Following Ford's speech, Ontario Green Party Leader Mike Schreiner told National Observer that he felt like the Ford government had assumed an agenda “to declare war on the modern world.”

“Whether it was ripping up renewable energy contracts, or dismantling Ontario’s climate plan, or rejecting the sex-ed curriculum and taking us back to 1998, or interfering in an unprecedented way in local municipal elections in Toronto, as well as a number of regional elections, it was a tough summer for any party that believes in local democracy and believes in responsible climate action," said Schreiner.

Wynne, who was re-elected and is now her party's education critic, sitting as one of seven Liberal MPPs, was in the Ottawa crowd and witnessed Ford’s speech.

She told media afterward that his comments about the Green Energy Act’s “transfer of money” from poor to rich to be too dismissive of the climate threat facing the province.

“We’re talking about a need to address the realities of climate change, across the world, not just in Ontario,” said Wynne. “This is a government that clearly is not interested in doing that.”

Wynne said the Liberals had been confronted with “huge neglect of the electricity grid for years in this province” and a grid that she called “dirty.”

Ontario made “huge strides” in shutting down coal-fired electricity, that’s resulted in cleaner air, according to the Pembina Institute. The Green Energy Act also ushered in a renewable energy industry that created jobs, Wynne said.

“We made those investments and there was a cost associated with them,” Wynne admitted. Then, “we recognized that electricity rates had gone up, and we lowered them,” she said, referring to the Ontario Fair Hydro Plan.

“We have been a leader in terms of green energy across the world, and we won’t be anymore if all of these decisions go ahead.”

Ford also spent some time in his speech reviewing his government’s decision to cut Toronto city council roughly in half, from 47 to 25 city councillors, about two months to go before the next round of municipal elections in the province.

"We also took action to make government in Toronto, York, Peel, Niagara and Muskoka more efficient,” Ford said in his speech. “Let me tell you that we are excited about what this law will do, saving taxpayers $25 million dollars and improving decision-making across the city.”

He blamed the Liberals for having “imposed” elected regional chairs in 2016. “The last thing any municipality needs is yet another layer of elected politicians,” said Ford.

“And no, we do not have plans for similar legislation in our near future."

The move was criticized as anti-democratic, coming during the municipal campaign leading up to the Oct. 22 voting day.

Ontario NDP Leader Andrea Horwath told media on Monday at the conference that her caucus is in the process of drafting a private members’ bill to create an "open, transparent and public engagement process" to determine city councils.

"We're in a democratic community, a democratic province, a democratic country, and this kind of behaviour that Mr. Ford has undertaken — meddling in municipal elections while they're underway — is something that you would see in developing democracies, or countries that are trying to get to a democratic system,” said Horwath.

“It's unfathomable that we would see a premier interfere so blatantly while an election is underway."

She suggested that many of the locally-elected officials might be frightened about the turn of events, following the election.

"I think it sends a chill down the spines of the municipal leaders here at the AMO conference when they see a premier that for personal, political reasons, to fulfill vendettas against political foes of the past, he — with one broad stroke — takes away the democratic rights...of the people of Toronto"

She also said that cities should still be able to change their makeup, but the process should be made fairer.

"Municipal leaders have some concern about this government's preparedness to simply govern by edict, and not engage people in their own governance,” said Horwath. “In 2018, that's not acceptable.”

Editor's note: This story was updated at 5:00 p.m. ET on Aug. 20 to include quotes from Schreiner.

As a former Ontarian and

As a former Ontarian and Torontian, I can't understand how Doug Ford got away with posing as "the tax slayer". Contrary to he and his brothers often repeated claim that the city administration they lead from 2010 to 2014 "saved Toronto taxpayers a billion dollars", an "Unfinanced Capital" account found by the current city administration totaling a billion dollars. According to mayor John Tory, they racked up over $300 million of undeclared debt in 2013 alone! The truth is the exact opposite of Doug Ford's claims during his time as councilor, and during this year's provincial campaign. How did he manage to get through this year's campaign without the opposition parties and media in Ontario not challenging this oft-repeated claim?