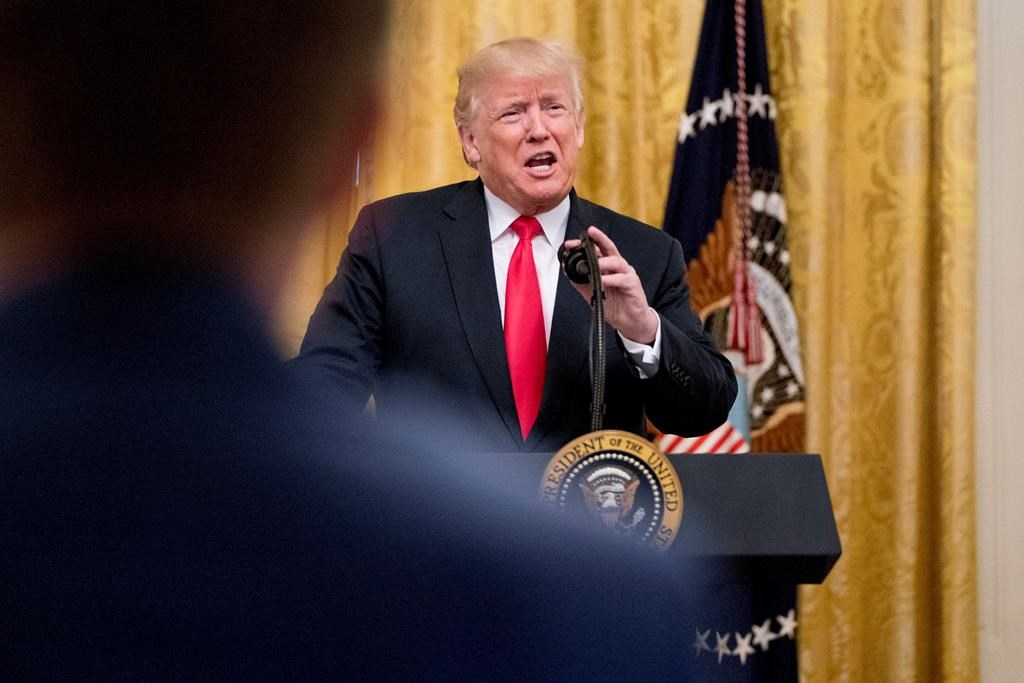 President Donald Trump speaks during an event to salute U.S. Immigration and Customs Enforcement officers and U.S. Customs and Border Protection agents in the East Room of the White House in Washington, on Aug. 20, 2018. Photo by The Associated Press
Previous story
Next story

The Trump administration is set to roll back the centerpiece of President Barack Obama's efforts to slow global warming, the Clean Power Plan that restricts greenhouse gas emissions from coal-fired power plants.

A plan to be announced in coming days would give states broad authority to determine how to restrict carbon dioxide and other greenhouse gas emissions that contribute to global warming.

The plan by the Environmental Protection Agency also would let states relax pollution rules for power plants that need upgrades, according to a summary of the plan and several people familiar with the full proposal who spoke to The Associated Press on condition of anonymity because they weren't authorized to discuss the plan publicly.

Combined with a planned rollback of car-mileage standards, the plan represents a significant retreat from Obama-era efforts to fight climate change and would reverse an Obama-era push to shift away from coal and toward less-polluting energy sources such as natural gas, wind and solar power. President Donald Trump has already vowed to pull the U.S. out of the Paris climate agreement as he pushes to revive the coal industry.

The White House had no immediate comment on the plan, and the EPA didn't respond to requests for comment Monday.

The White House rejects that criticism.

"Carbon dioxide emissions from the power sector will continue to fall under this rule, but this will happen legally and with proper respect for the states, unlike" the Clean Power Plan, the summary says. The AP obtained a copy of the summary, which asserts that the Obama-era plan exceeds the EPA's authority under the Clean Air Act.

Obama's plan was designed to cut U.S. carbon dioxide emissions to 32 per cent below 2005 levels by 2030. The rule dictated specific emission targets for states based on power-plant emissions and gave officials broad latitude to decide how to achieve reductions.

The Supreme Court put the plan on hold in 2016 following a legal challenge by industry and coal-friendly states, an order that remains in effect.

Even so, the Obama plan has been a factor in a wave of retirements of coal-fired plants, which also are being squeezed by lower costs for natural gas and renewable power and state mandates that promote energy conservation.

Trump has vowed to end what Republicans call a "war on coal" waged by Obama, and he is expected to promote the new plan at an appearance in West Virginia on Tuesday.

"This is really a plan to prop up coal plants — or try to," said David Doniger, a climate expert at the Natural Resources Defence Council, an environmental group.

The Trump plan "will make no meaningful reductions" in greenhouse gas emissions "and it probably will make emissions worse," Doniger said.

Gina McCarthy, who served as EPA administrator when the Clean Power Plan was created in 2015, said that based on draft proposals and news reports, she expects the plan will not set specific federal targets for reducing emissions from coal-fired plants. The plan is expected to address power plants individually rather than across the electric grid as the EPA proposed under Obama. The new plan would give utilities and states more flexibility in achieving emissions reductions, but critics say it could harm public health.

"They are continuing to play to their base and following industry's lead," McCarthy said of the Trump administration and its new acting administrator, Andrew Wheeler, a former coal industry lobbyist. "This is all about coal at all costs."

Michelle Bloodworth, president of the American Coalition for Clean Coal Electricity, a trade group that represents coal producers, called the new rule a marked departure from the "gross overreach" of the Obama administration and said it should prevent a host of premature coal-plant retirements.

"We agree with those policymakers who have become increasingly concerned that coal retirements are a threat to grid resilience and national security," she said.

Gore: Trump not yet as damaging to environment as he feared

EPA chief gets support from Trump, warning from White House