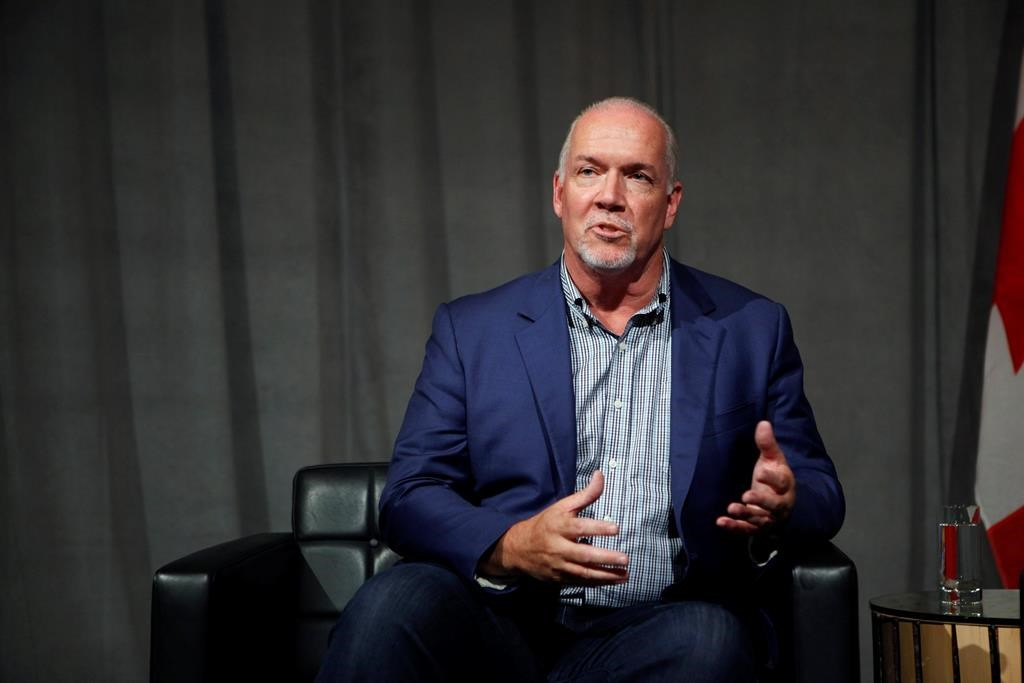 Premier John Horgan says successive B.C. governments have budgeted "laughable" amounts of money to fight wildfires that are becoming all too common through the ravages of climate change.

Horgan said Tuesday during a visit to Prince George that the sky in the northern city turned jet black one morning last week from fires burning in nearby communities.

"We have serious challenges for public health and we need to adapt our policy making, working with all levels of government to make sure that as we go forward we're better prepared," said Horgan, flanked by federal Defence Minister Harjit Sajjan, Mayor Lyn Hall and Grand Chief Ed John of the First Nations Summit.

"Clearly, we are going to overshoot the budget again this year, which has happened repeatedly," Horgan said, adding both federal and provincial governments must ensure adequate resources are available to safeguard communities.

He said wildfires prompted an unprecedented second state of emergency in the province in the last 12 months after floods this spring, but he's confident there's enough contingency in the budget to provide the needed support.

Canadian Armed Forces troops have been deployed to B.C. during the floods and wildfires this year, as well as for fires in 2017.

Sajjan said troops have increasingly responded to disasters across Canada as climate change takes a toll on the environment.

"We as a government do realize that we need to take steps in terms of how do we mitigate some of these things as we work very closely in trying to reduce our greenhouse gas emissions, do our part as the rest of the world needs to do theirs."

British Columbia budgeted $63 million for wildfire suppression for the 2018-19 season but has already spent $274 million, according to figures from the Forests Ministry. It said last year's budget allocated the same amount of money, but the firefighting efforts cost $649 million.

More than 2,000 evacuees headed to Prince George after being ordered out because of an 850-square-kilometre blaze threatening an area from Fraser Lake to Fort St. James.

Smoke from distant wildfires is forcing residents in parts of the province to stay indoors, especially if they have pre-existing conditions such as asthma, and tourism is being affected where skies are hazy.

Teck Resources temporarily shut down its lead smelting operations in Trail, saying a supplier plant that provides oxygen is closed due to poor air quality that is affecting lead smelting.

As part of the city's wildfire prevention program that started in 2005, Hall said the community will discuss what steps it can take to mitigate future wildfires, including clearing the forest floor of debris.

Lori Daniels, an ecology professor at the University of British Columbia's faculty of forestry, said only about one third of B.C. communities have wildfire prevention plans though the risk of such disasters is increasing.

She said it's time for the public to support initiatives including tree removal in forests close to homes as climate change creates hotter, drier conditions after decades of fire suppression policies that led to an accumulation of dead trees and twigs that act as fuel for fires that can quickly get out of control.

"This is an issue for all of us who live near burnable vegetation, which is pretty much a large proportion of Canadians, even in urban areas where we have forests that could catch on fire with these extreme weather conditions," Daniels said.

Community wildfire prevention plans would assess hazards, including small and big trees that need to be cut down in areas where homes are built close to forested areas, she said.

"In many places in B.C., the forests adjacent to communities are so dense that even when you drop water on them from a water bomber the water all stays at the top of the trees and never makes it to the ground where the fire is travelling."

Logan Lake fire Chief Daniel Leighton said the community began a wildfire prevention program with provincial grants after extensive fires in the province in 2003 during a record-dry summer.

He said the current program involves youth employed through a summer job-creation initiative that has them trimming branches and picking up debris to rid the forest floor of fuel.

Between 150 to 180 hectares have been treated by hand since 2003 though small amounts of land are also clearcut, he said, adding that part of the program was a "hard sell" for people opposed to logging that's done through a corporation set up to put money back into the community.

"Once you start cutting down trees and thinning them down some people don't like it, although they don't like the fires either. But the last few years have been an awakening for some people."

He said public meetings provided residents with information about the benefits of the program that has attracted attention from other jurisdictions wanting to follow suit, including Colorado, Ontario and elsewhere in B.C., where similar but much smaller programs exist in a few areas including Kamloops, Merritt and some ski resorts.

Is B.C. headed for another devastating summer of wildfires?