Heckler was a 'plant' to embarrass the prime minister, says former RCMP officer 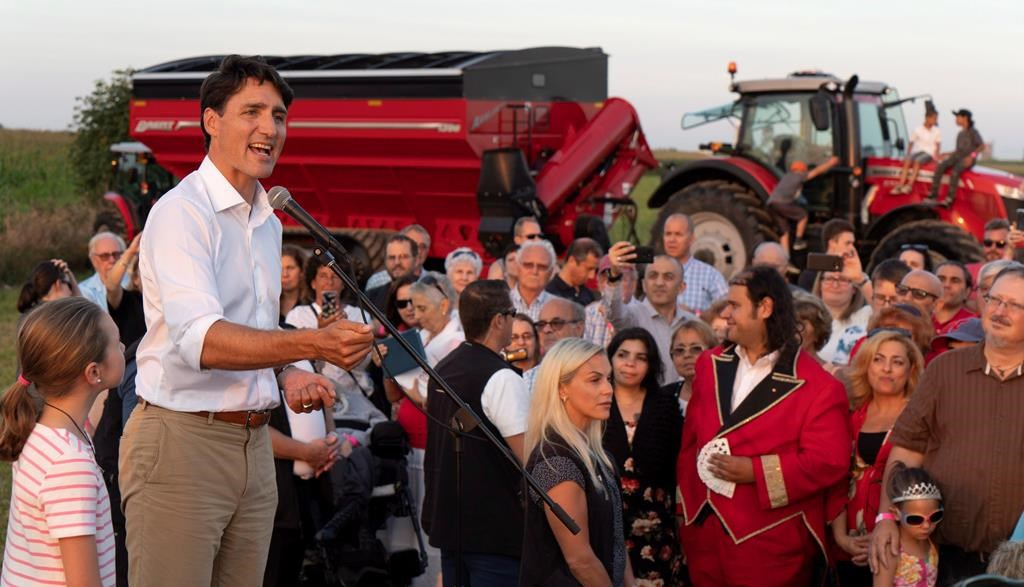 Prime Minister Justin Trudeau spars with a heckler at an event in Sainte-Anne-de-Sabrevois, Qc. on Aug. 16, 2018. File photo by The Canadian Press
Previous story
Next story

The Prime Minister's Office is refusing to say precisely when — or even if — Justin Trudeau knew he was dealing with an alt-right activist when he denounced her questions about the cost of "illegal immigrants" in Quebec as intolerant and racist.

Nor were members of Conservative rival Andrew Scheer's staff willing to discuss Tuesday whether their leader was aware of the woman's background when he issued a statement late Monday deriding Trudeau's response as dodging a legitimate policy question.

But with such details as close as the nearest iPhone, suggesting otherwise stretches credulity, said Chris Mathers, a former RCMP officer and security consultant who was once part of the detail that protected the prime minister's official residence.

"There's no doubt that lady was a plant in there ... to try and embarrass the prime minister, because she's one of these fringy types," said Mathers, noting that PMO security officials routinely monitor intelligence for any potential threats or disturbances at public events.

Given that she belonged to a social media group that openly discussed plans to attend last week's event, it is unlikely the prime minister's security detail or PMO officials were taken by surprise, he added.

If alerted to an organized effort to potentially cause a disruption, security officials "would have informed (the PMO), anyway," Mathers said.

During a campaign-style rally Thursday southeast of Montreal, the woman shouted questions in French at Trudeau, asking him when the federal government would repay Quebec for costs it has incurred as a result of an influx of "illegal immigrants" coming over the Canada-U.S. border.

The Quebec government has demanded Ottawa pay the full costs of social services provided to so-called irregular migrants who have crossed into Canada between established border crossings over the past couple of years — costs the province says have reached $146 million so far.

"There's no doubt that lady was a plant in there ... to try and embarrass the prime minister, because she's one of these fringy types."

The prime minister responded to the woman by accusing her of intolerance and racism and saying her sentiments were not welcome. She has not responded to requests for comment.

The retort seemed disproportionate at first. But questions about how much Trudeau knew of the woman have persisted as more details emerge about her apparent ties to anti-immigration activist groups such as the Front Patriotique du Quebec and the Storm Alliance.

Those questions were fuelled in part by Scheer's late-day statement, which accused Trudeau of using "name-calling and personal attacks to shut down legitimate criticism." It came long after the woman's alt-right ties were already being reported online and in news reports.

"This is a calculated Liberal strategy to avoid being accountable for their record," Scheer said. "Instead of demonizing critics, Justin Trudeau should confront the problem."

Scheer spokesman Brock Harrison defended his leader's narrative, citing the case of Ontario cabinet minister Lisa MacLeod, who was called "un-Canadian" earlier this summer by federal Immigration Minister Ahmed Hussen for pressing the issue of the cost of irregular migrants.

"A vast majority of Canadians believe Justin Trudeau has no idea how to handle the border situation and it's not in any way out of bounds to ask him questions about it," Harrison said.

"Mr. Scheer is only defending every Canadian's right to ask their government a legitimate question about its record without getting personally smeared."

"Name-calling and attacking are his standard tactics when he is losing a debate on the facts," Scheer's statement said. "People who have questions about the border crisis are racists. If they are concerned about the costs, they are un-Canadian. If they oppose the carbon tax, they are deniers."

This is how you can tell when Liberals are losing. Concerned about illegal border crossers? You’re a racist. Worried about the cost? You’re un-Canadian. Don’t like the carbon tax? You’re a denier. Canadians are sick and tired of this. 3/5

'She was engaging in hate speech'

But Bernie Farber, chair of a newly-formed non-profit organization the Canadian Anti-Hate Network, warned Scheer away from defending the rights of those linked to groups with neo-Nazi and white supremacist ties.

"This has got nothing to do with free speech — she was engaging in hate speech, that's what this is all about," Farber said.

Fringe anti-immigrant movements are on the rise in Canada, Farber warned — emboldened by divisive rhetoric and attitudes south of the border and evident in recent attacks in this country, most notably the Quebec City mosque shooting last year that killed six Muslims during their prayers.

But with the Liberals and Conservatives jockeying for election position heading into 2019, the growth of populism means immigration will be a key campaign theme, said Jack Jedwab, head of the Association for Canadian Studies and the Canadian Institute for Identities and Migration.

Trudeau and the Liberal party have positioned themselves as defenders of multiculturalism and enemies of anti-immigration discourse.

Conservatives will likely try to do the same — but could have a harder time, Jedwab warned.

"Some people in some parts of the Conservative constituency will clearly see this issue as an opportunity to score some points, so there's going to be a bit more of a delicate balance in that regard," he said.

"(Scheer) is going to have to walk a fine line — and I think the Liberals can smell that, and they'll act accordingly."