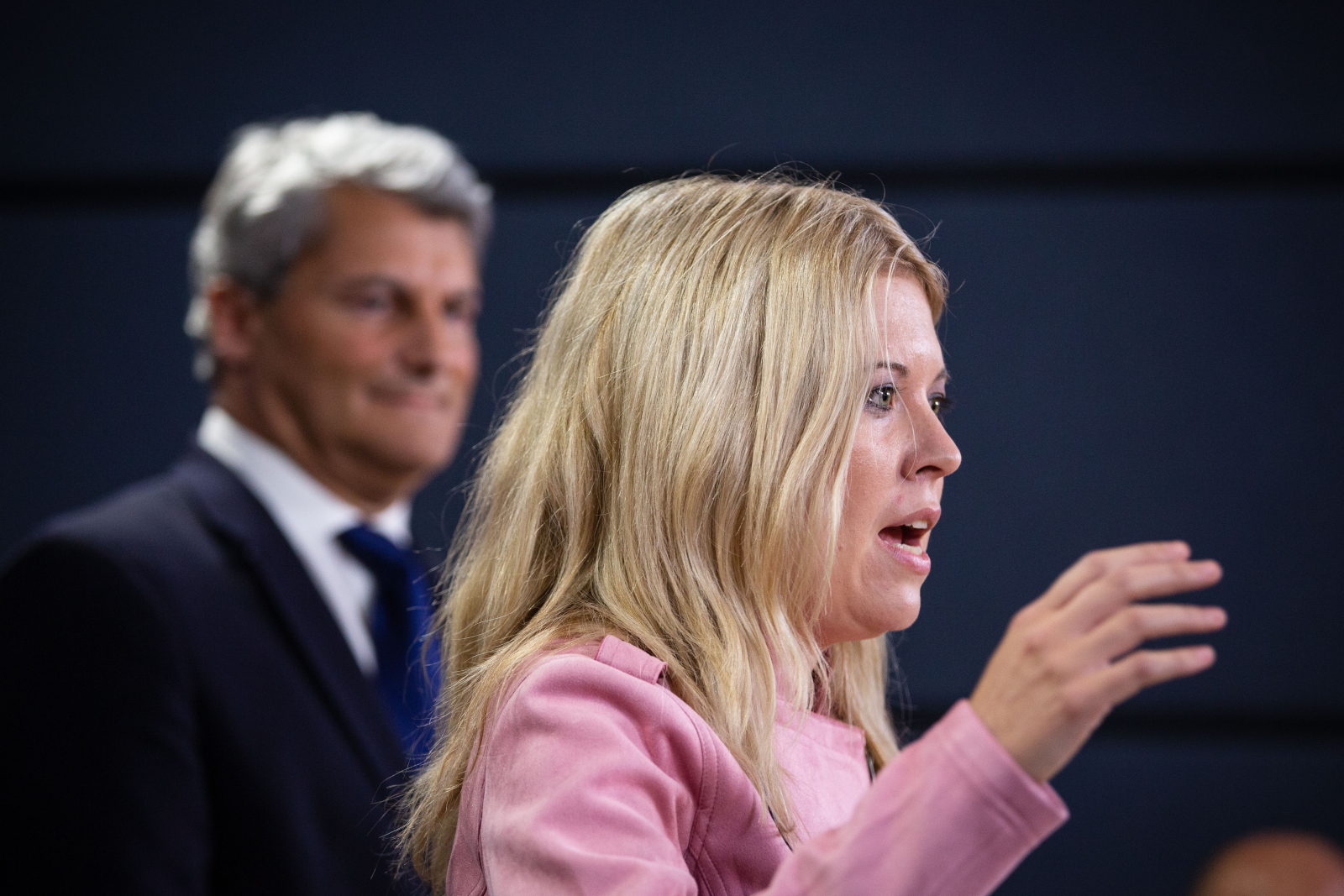 Conservative immigration critic Michelle Rempel speaks to media in Ottawa on Aug. 22, 2018 as the party's Treasury Board critic Gérard Deltell looks on. Photo by Alex Tétreault
Previous story
Next story

The Conservative Party’s immigration critic said Wednesday that she drew attention to some of the views of a far-right activist who used intolerant language — without hearing what the woman had actually shouted during a testy exchange last week with Prime Minister Justin Trudeau.

Michelle Rempel made the comments during a news conference in Ottawa after reporters asked her to explain why she had used the woman's questions as part of her party's political criticism of Trudeau.

Rempel, who represents a Calgary riding in Parliament, said she had only seen a 1:46-long clip on CTV News, where the woman shouts in French at Trudeau at an event southeast of Montreal, about repaying Quebec for the costs of "illegal immigrants.”

Rempel tweeted that clip on Sunday, and added that the woman’s questions “are the exact questions we have been asking him.” The next day, Conservative Party leader Andrew Scheer tweeted that such questions were “legitimate.”

Federal Liberals say that the Conservatives are promoting intolerance by amplifying far-right views.

The full exchange, which lasted over six minutes, shows the woman — identified by La Presse Canadienne as Diane Blain, a member of an anti-immigrant, nationalist group — repeatedly ask a second question: “are you tolerant of Québécois de souche?”

“Québécois de souche” is a term used to describe “old-stock” Quebecers that is considered to be intolerant since it excludes visible minorities. Trudeau responded to the activist's use of the term by saying, “madam, your racism has no place here.”

Rempel on heckler: 'I don't know this woman'

On Wednesday, Rempel said she hadn’t seen that part of the exchange.

“I don't know this woman,” said Rempel to reporters in Ottawa. “The clip that I saw...showed this woman asking a question that the premier of Quebec himself has asked,” she said, referring to repaying Quebec for irregular border-crossers.

Asked whether she thought Blain was racist, Rempel referred back to the question about funding for Quebec, noting “people don’t like to have their concerns dismissed." She added questions around budgeting are “reasonable.”

But she quickly rejected the notion that the Conservatives had sided with the woman. "I was commenting on a video that (CTV News) posted."

In response to another followup question, Rempel again said she hadn't seen the full exchange.

"I haven't spent the last three days looking at what this woman said. This is the first time, to be honest with you, you're telling me this here," she said.

"I'm not Québécois so I don't understand the term writ large. But if it holds offence to people...of course I don’t support that.”

Rempel and the Conservatives’ Treasury Board critic Gérard Deltell were in town to announce a new suite of immigration policies that Rempel said the party would like to “explore” ahead of their policy convention this weekend in Halifax.

The policy list included closing what the Conservatives call a “loophole” in the Safe Third Country Agreement with the United States, to better supporting immigration uptake and retention in rural areas, reforming refugee resettlement programs and encouraging greater use of privately-sponsored refugees, among other issues.

The two critics also announced the party would be going on a listening tour this fall, called the Pathway to Canada tour, to hear people’s suggestions about immigration policy.

In a speech Tuesday in Surrey, B.C., Immigration Minister Ahmed Hussen said he was "starting to feel that a portion of the Conservatives is about fear-mongering, pitting Canadians against newcomers, dividing communities and questioning the value of diversity."

On Wednesday, the minister reacted to the Conservatives' Pathway to Canada announcement by suggesting the party was playing catch-up.

"They finally figured out that in order to reach a good immigration policy, they're going to need to talk to Canadians," he told reporters.

"It's really sad to see that here, we had a chance to see the Official Opposition put together a real plan on immigration to address labour market challenges, skills shortages, demographic challenges, we haven't seen that this morning," added Hussen.

He also said he was "very proud" that Trudeau "called out racism when it reared its ugly head," referring to the incident with Blain, who he described indirectly as "a known member of a neo-nazi group."

"As someone who has experienced racism in Canada — although this has been the most generous country to me, this is my home, and this is the country I feel so much being able to belong to, and welcomed...I have experienced racist incidents, and when that happened, I wish there (had been) someone like the prime minister who stood up and called it out."

Maybe she should “listen” to

Maybe she should “listen” to the whole exchange before commenting. Another case of queen full of baloney. How embrassing for her, smear and the Cons.

Of course the Conservative

Of course the Conservative party supports fringe opinions and fears on Canada's alt right. Conservatives on the ground often confuse hate speech, or violent speech, with free speech........perhaps because significant numbers on the grassroots right, talk that way.

Entitlement erodes language after awhile; too much assumed power weakens our capacity to reason or think originally. So people react with anger, and verbal abuse when their ways of life are threatened.

Immigration is an important issue around the world today. Supporting old stock Canadian nationalists isn't how we should tackle it.

"Growing the middle class" and blithely ignoring the working class, growing precarity, stagnating wages and job losses to automation, is illusory politics as well. People fear the rising tide of asylum seekers, because they feel left out of economic growth and the political process.

Who is going to address the needs of the people who work in this country? When are we going to call BS on the idea that someone making less then 50,000 a year is middle class? Growing poverty in Canada is what is fueling the alt right.

Might be time to get our heads out of the twin gopher holes of liberal-conservative polarization, and do some hard thinking for all of us. If we get good at inclusive thinking, we might even consider adding the ecosphere to our list of issues. Because at the rate we're burning, we soon won't be able to support our current population, never mind being planetary savior to the world's victims of war, economic extractivism, and climate change.

These are difficult times. Not times for black/white, right/left polarization

To be fair to Ms Rempel, I've

To be fair to Ms Rempel, I've followed this story a fair bit in the media and this is the first time I've heard excerpts from the heckler's full exchange. Even the National Observer's coverage, like Teresa Wright's on August 22, "Heckler was a 'plant'" told us only that "the woman shouted questions in French at Trudeau, asking him when the federal government would repay Quebec for costs it has incurred as a result of an influx of 'illegal immigrants' coming over the Canada-U.S. border."

As for Storm Alliance, the group the heckler's been linked with, Immigration Minister Hussen might be going too far in calling them "neo-Nazi." Montreal-Antifasciste-Info's fact sheet on Storm Alliance sums them up in these words: "Storm Alliance itself is not a fascist organization – it does not seek to overthrow the government, or to set up a dictatorship. It is better understood as a populist and nationalist organization, based on an inherently racist hostility towards immigrants and multiculturalism, which tolerates members who are personally pro-fascist and openly white supremacist. This is just one example of a tendency observed by antifascists in 2017: the national-populist milieus are increasingly prepared to collaborate with openly fascist groups and individuals."

Liberals are playing a very

Liberals are playing a very dangerous game polarizing the country on this issue... https://canadianviews-ymo.ca/trudeau-on-refugees-teflon-wearing-thinner-...