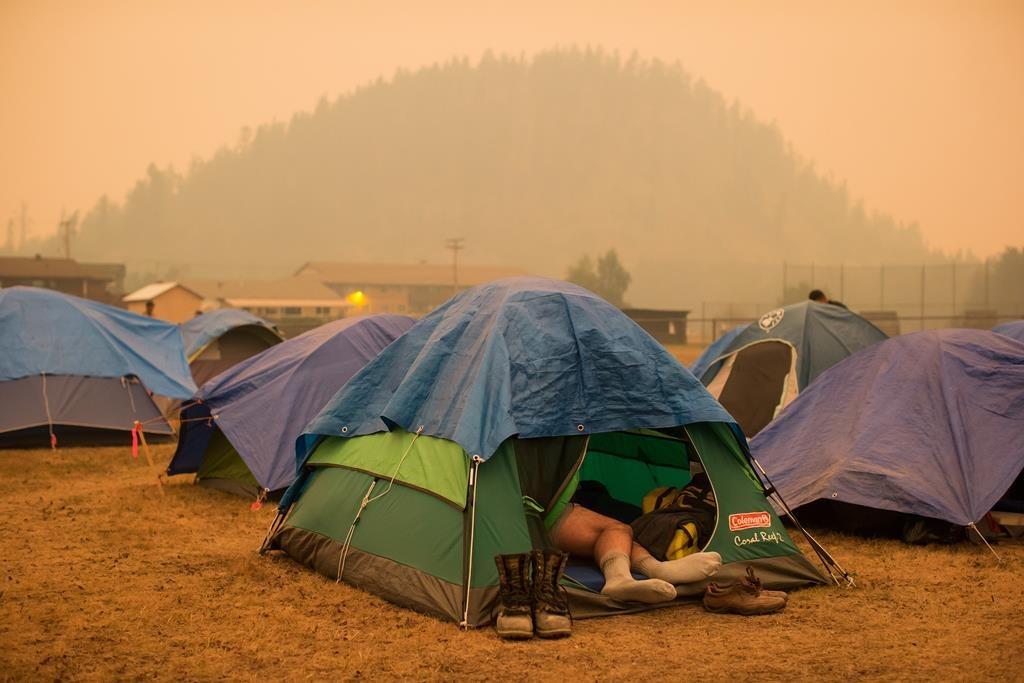 Firefighter Raymundo Rosales, of Mexico, lies his tent at a camp of wildfire firefighters and staff at an outdoor sports field, in Fraser Lake, B.C., on Wednesday August 22, 2018. Photo by The Canadian Press/Darryl Dyck
Previous story
Next story

Trudeau acknowledged the divide in resources for municipalities, which work with the province on forest fires, and First Nations reserves, which fall under federal responsibility.

Trudeau left the federal cabinet meeting in Nanaimo on Vancouver Island to travel to Prince George in central B.C. to meet with those working to control some of the 563 wildfires that have charred more than 6,000 square kilometres of the province.

He met with fire protection officer Tom Reinboldt, Mayor Lyn Hall, and local legislature member John Rustad, among others, in a boardroom inside the local fire centre, before shaking hands with crew members gathered outside as smoke filled the air and a hazy grey fog hung in the sky.

B.C. has declared a state of emergency due to wildfires for the second time in as many years, and Trudeau said it was important to bring together all levels of government to adjust to the "new reality" of extreme weather events.

"We need to make sure people are safe and that homes and livelihoods are protected. That's something that we are very much working on and we will continue to. We made significant improvements, but ... there's still lots more to do."

He has tasked several members of the federal cabinet with co-ordinating support, recovery and rebuilding efforts as the federal and B.C. governments work together to assist those affected by the fires.

He said his heart goes out to those who have lost homes in the flames. More than 40 structures have been destroyed in Telegraph Creek in northern B.C., including 21 on Tahltan territory.

"What Canadians do is stick up for each other in times of difficulty," he said. "We are all heartbroken at the extraordinarily difficult situation people are going through.

"People have lived in these communities for generations, for millennia in the case of First Nations communities, and there is a deep attachment. Watching your entire livelihood and perhaps your kids' future going up in smoke is an extraordinarily difficult thing."

Grand Chief Ed John of the First Nations Summit said he met with the prime minister early Thursday and delivered the message that Indigenous groups are overburdened by wildfires and that they expect them to get worse with climate change.

"The fuel load out in the forest is massive. We expect that the fires will continue over the years. They will be bigger. They will be more intense," John said.

While First Nations are only five per cent of the population, they represent 50 per cent or more of evacuees for all types of evacuations, he added.

John is calling for a $200 million federal fund to help the province's 203 First Nations develop emergency management plans, train personnel and buy equipment over the next four years. He first issued the proposal during last year's fires, but heard "nothing" from the federal government, he said.

The prime minister seemed open to their discussion on Thursday, said John.

The wildfire danger map posted by the BC Wildfire Service showed a rating of extreme or high across most of the province and thousands were on evacuation alert or have already fled their homes. But cooler weather and possible showers were in the forecast, although officials warn there is a danger of lightning along with the rain.

Leaders in the tiny community of Lower Post near the Yukon boundary confirmed at a community meeting Wednesday night that three structures were lost as a 50-square-kilometre wildfire skipped through the middle of the village.

Other fires around the province prompted evacuation orders Wednesday, including for homes and cottages threatened by an aggressive blaze near MacGillivray, east of Pemberton.

Dense smoke from the fires continued to prompt air quality alerts across most of B.C. because of soaring levels of tiny bits of grit contained in the smoke.

The advisory for Metro Vancouver included ground level ozone, the smog created when emissions from vehicles and other sources react in sunlight and stagnant air.

— With files from CKRW