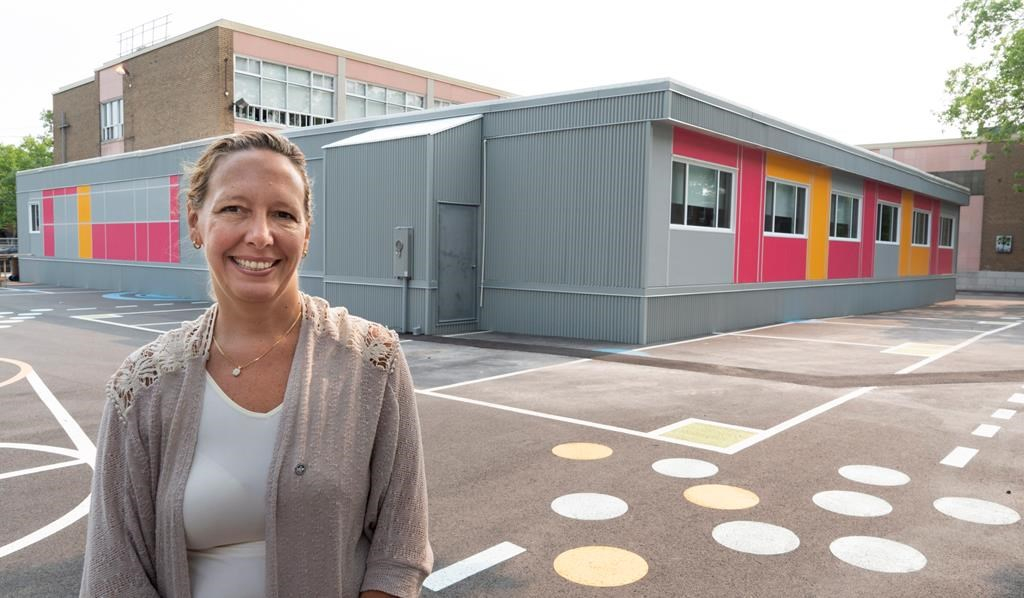 Marie-Jose Mastromonaco, vice-president of the Montreal School Board, is seen next to temporary classrooms at the Saint-Gabriel-Lalemant in Montreal on Friday, August 24, 2018. Photo by The Canadian Press/Paul Chiasson
Previous story
Next story

Over the summer with the kids away, construction crews have hastily been erecting temporary, metal-clad extensions to aging school buildings across Montreal, to help cope with ever-increasing enrolment.

A mini baby boom in the 2000s, increased immigration and a recent influx of refugees are putting enormous pressure on the education system in the city amid recent budget cuts and rapidly deteriorating school infrastructure.

Montreal's public schools are bursting at the seams and, similarly to the highways and bridges across the province, the bill for decades of neglect has come due.

As the first week of the Quebec election campaign comes to end and as thousands of children return to school, teachers and their unions want the four main political parties to make a pledge: reinvest massively in education instead of dogmatically striving to balance the budget.

At Saint-Gabriel-Lalemant elementary school in Montreal's north end, the red, orange and grey-painted extension protrudes from the original building's backside, swallowing part of the paved schoolyard.

Marie-Jose Mastromonaco, a school board commissioner and its vice-president, said many of her board's 150 schools had been expanding internally over the years, turning less frequently used spaces such as libraries into classrooms.

"We got to a point where we transformed everything that was transformable," she said in an interview, sitting inside one of the new classrooms in the extension.

"Some schools don't have libraries, no dedicated music rooms. This is to give a little bit of breathing room."

Most immigrants and refugees don't qualify for the right to attend English school under Quebec's strict language legislation and by law must enter the French system.

While many English schools have empty classrooms and plenty of space for new children, French-language schools are being retrofitted with these one-floor, temporary extensions to handle all the kids.

The so-called modular classrooms are impressive: they're well-lit, air-conditioned, with new desks and a giant digital screen at the front of the room.

For the 2018-19 school year, Mastromonaco's board built 104 modular classrooms at 19 Montreal-area schools that will house roughly 1,800 students beginning Monday.

The extensions took roughly seven months to build from conception to delivery and cost about $20 million, she said.

"These are temporary," she insisted, while her board waits for the money for a real extension - or a new building.

But she doesn't know how long, "temporary'' means.

While the modular classes look like any new classroom, they mask a serious problem: roughly 75 per cent of all primary school buildings in the province are in bad or very bad shape, according to a recent government evaluation.

Additionally, the government noted 47 per cent of high schools were also in serious need of repair. The same report, the 2017-27 infrastructure plan, indicated that maintenance budgets for each school are running a collective deficit of $1.8 billion - not including the junior college or university system.

It's not just the physical structures that are in bad shape, either.

Teachers are burning out, according to their unions, and the Liberals' drive to balance the books between 2014 and 2016 had a serious effect on morale.

While none of the parties has yet released their costed financial plans regarding education, Francois Legault's Coalition Avenir Quebec is promising to make school mandatory beginning at four years old and to "modernize" all school infrastructure.

The Parti Quebecois is pledging to pass a law guaranteeing a minimum, annual budget increase for the Education Department, while Quebec solidaire wants to extend subsidies and make university "free."

Jacques Letourneau, president of the Confederation des syndicats nationaux, a major labour federation that represents teachers, said the new government must decide what its priority will be: deficit reduction or investment in schools.

"For years we have been obsessed with achieving a zero deficit, paying back debt," he said in an interview. "We're not saying we shouldn't take care of our finances, but we cut so much we are jeopardizing services."

Josee Scalabrini, head of another teachers federation, grudgingly recognizes that despite the problems, Quebec schools are "very acceptable."

"But that's because of the teachers," she said in an interview. "They are the ones holding our schools together. But they aren't paid what they are worth, and we aren't attracting enough young people to the profession."

Back at Saint-Gabriel-Lalemant, Mastromonaco said her schools couldn't renovate at the pace they want even if they had the cash and the political will.

Schools, she said, are suffering from another reality felt across the province: labour shortages due to a strong economy.

Mastromonaco said construction companies have so much work to do that some school-renovation contracts offered by her board haven't attracted a single tender.

"The entrepreneurs just can't anymore," she said. "Their workloads are full. I have never seen this, not having any takers for school contracts."