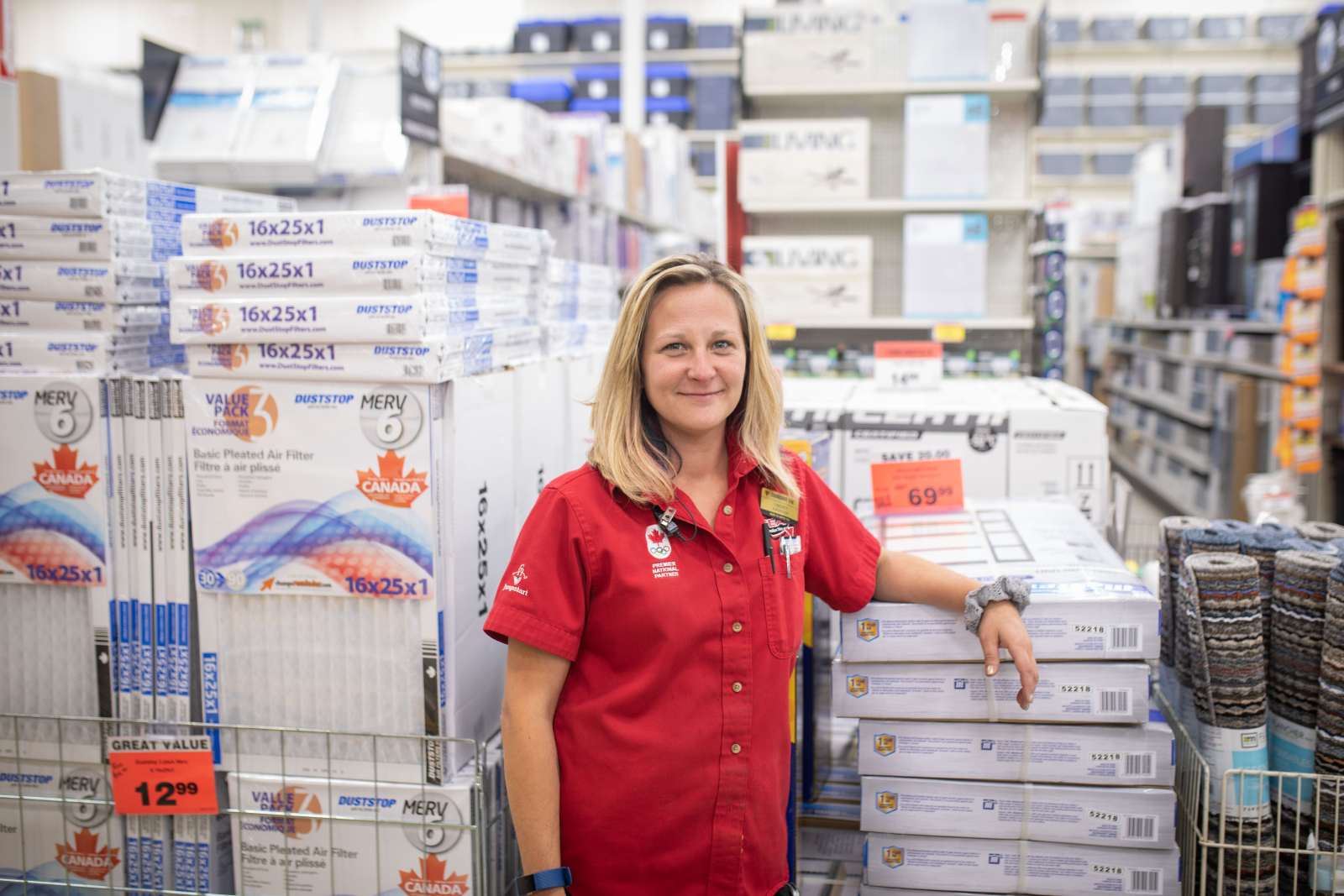 Lindsey Snyder, a Canadian Tire supervisor who was born in Penticton, B.C., says air purifiers have sold out and remain in high demand due to the wildfires. Photo by Geoff Webb
Previous story

British Columbia’s Okanagan Valley, known for its long hot summers and beautiful lakes, wineries and orchards, has long been a popular destination for tourists, wedding parties, and families seeking a healthy lifestyle closer to the great outdoors.

Although temperatures are starting to cool down, blazes are still raging across the province in the second-worst wildfire season in B.C’s history. The Okanagan region has been one of the worst-hit.

As scientists predict more hazy summers to come. some people are sad and angry, others are looking for silver linings and some are pressing the community to take more responsibility to protect the environment.

“When I mow the lawn I wear ear protection, so when there is smoke and particulates in the air I use the mask. I go to the beach and walk my dog with it on.”

But Martin still experienced the same symptoms she had last August when smoke also blanketed the Okanagan: coughing, tightness in the throat and itchy eyes.

Elderly people are more vulnerable to the health effects of air pollution because lung function decreases with age, according to the B.C. Centre for Disease Control. Children are at greater risk too because their lungs do not fully develop until age 10.

As scientists predict more hazy summers to come, some people are sad and angry, others are looking for silver linings and some are pressing the community to take more responsibility to protect the environment. #BCwildfires #BCpoli

She believes that climate change is the main cause of shifting weather patterns such as unusually heavy rain in the spring causing severe flooding in B.C.

“The floods didn’t impact me, but watching it on TV everyday you get depressed a bit more every time. I think the government is doing what it can already ... and we need to think of other solutions.”

Sukhdeep Brar, who goes by “Deep”, is a second-generation tree fruit farmer. His father moved to the Okanagan from India in the 1970s and worked in the sawmills and on other people’s farms before saving enough to buy his own acreage.

Tree fruits are particularly sensitive to weather changes, particularly cherries, and Brar says farmers are some of the people most likely to recognize the impact of climate change because they keep careful records of seasonal temperatures.

“It wasn’t like this when I was growing up. This year is not as crazy but the few years before with the spring being so warm everything came that much earlier. Last year we were picking cherries at the start of June and it’s a big rush to get all the pruning done first.”

He isn’t sure how much global warming impacts wildfires, but the smoke is certainly taking a toll on his workers, who cough while they go up and down ladders harvesting the fruit into buckets.

“There were a few days when it was hot and smoky and then ash was falling too. It was so bad we just stopped. It was too hard. If this is like this every year, we’d have to hire more people and do less hours.”

But some workers are paid according to how much crop they pick, and Brar is torn between allowing his staff to work longer hours and preventing them from getting sick. He said the government could help by streamlining processes for hiring seasonal agricultural workers from overseas.

“As a farmer, you deal with all sorts of weather and smoke is just another thing now. We’ll probably see this for the next few years until the mountainsides get burnt off and there’s no fuel left.”

Karen Beaupre is the manager of another family-owned business, Splash BC, which operates floating water parks with slides and trampolines off the beaches of Peachland, Penticton and Kelowna in the Okanagan Valley.

The seasonal business can only operate during the hottest months of the year, and now for the second summer in a row, Beaupre is seeing half as many of the usual visitors come out to play during smoky days.

“I think a lot of the grandmas and grandpas who usually come with their grandkids may have allergies or something and can’t watch out all day, and kids are also susceptible to allergies or maybe aren’t allowed to come out as well,” she said.

The smoke also blocks the sun which makes temperatures cooler, providing another reason why tourists and locals are less keen about water sports.

“It’s such a great outdoor activity. We’re here all summer from the time kids get out of school to the time they go back, so we just hope and pray that during that we make enough so we can do it again next year,” Beaupre said.

“You can’t have a fire, you can’t make food, you can’t warm yourself. We just stayed in the car and watched a movie. It wasn’t really like camping compared to what it’s normally like.

“Camping isn’t really the same without having a fire.”

Tommy Robert, 19, and his friends work at a tire and auto repair shop. It is tough work, and they usually spend as much of their free time as they can relaxing outdoors in the woods.

“It’s very hard on your chest with all the smoke. I put tires on cars, put them away, receive stock. I feel like I’m slower than usual, a little bit more tired lately,” Robert said.

He and his friends were afraid to ask for time off because they didn’t want to lose their jobs. Some will be starting university this fall and will need the cash for the school year.

Even though firefighters had just extinguished a raging fire near Darke Creek the day before, they decided to go fishing after work and used their cell phones for light once it became dark.

Robert hopes there won’t be another bad fire season next year because the woods are such an important part of life in the Okanagan.

“Pyromaniacs! They burn and then they can see it on TV right? If they get caught I’d lock them up forever,” said Tina Trombley, 74, who is peeved that wildfires have affected her quality time with her granddaughter, who visits for two weeks each summer.

“We can’t go to the beach. We’ve been staying inside, but it’s hard to expect kids to stay indoors all day so we came out to the park for a bit.”

Trombley pins the blame mostly on human behaviour. “Dry weather doesn’t start a fire. There are more things people do that can start fires, like ripping around on quads (ATVs) in the woods or arsonists starting them on purpose.”

“There was that fire fighter in Oliver who was starting fires all over the place. It’s unbelievable,” she said, referring to a rash of fires in the B.C. interior in 2003.

Eight-year-old granddaughter Sierra feels that summer is already over.

“It feels like it’s almost winter for some reason. It’s dark. I can swallow ash when I put my head back like this. It doesn’t taste good!”

“At this point I don’t think there will be any effect. We’re just entering the stage where grapes really ripen and skins get a little thinner so the next few weeks it’ll be critical but the fire almost has to be right here to make an effect.

“But you don’t really know until fermentation. It could change the taste and it could be positive or negative.”

Duncan McCowan addressed the question many wine lovers had as they nervously watched smoke descend on one of Canada’s leading wine regions.

McCowan is president of the sprawling Hillside Winery, which also operates a popular bistro.

The bistro remained busy at lunch but McCowan closed the upper patio for several of the smokiest days because he didn’t want servers going up and down the stairs with heavy trays.

“It’s not fair to expect them to exert themselves in this unsafe environment,” he said.

But McCowan says there’s at least one silver lining to all the smoke.

“It makes the sun less intense so the grapes don’t get sunburnt as much so that could be a good thing because we’ve had no rain.”

It’s been a busy summer for Lindsey Snyder at Canadian Tire, but not because customers are rushing in to shop for outdoor recreational gear.

“We sold out of the air purifiers so fast and we had to order more and it took about a week for them to come in. And literally as soon as it hit our shelves they’re gone. All of the other business in Penticton are pretty much in the same boat. We just can’t keep up,” said Synder.

“Our firefighters are great. Last time we had thunder and lightning all the boys were up there right away and they probably saved a lot of acreage and a lot of homes. I think we need to be more vigilant before the season comes. We’ve got to be smarter,” she said.

Basement sump pumps and sandbags and moisture absorbers have also flown off store shelves in recent years as flooding has become more serious.

“I’ve never seen the Okanagan Lake so high because with the trees burned down, there’s nothing stopping the ice and snow when it starts to melt,” she said.

Lee Young, youth pastor at Summerland Baptist Church, says kids understand intuitively that there are both human causes of forest fires like people throwing cigarettes out car windows, as well as natural causes like lightning strikes.

“There’s not a lot of talk about God punishing us or something weird like that because it’s just not true,” he said.

He is seeing more Christians becoming active in environmentalism and challenging old-fashioned views based on interpretations of the Old Testament that God granted humans dominion over nature.

“We are supposed to be caretakers of the Earth. It’s our job. If we don’t take care of it, we ruin it. We are responsible.”

However, Young thinks popular movements can go too far overboard, like the anti-plastic straws trend in Vancouver, but people shouldn’t lose faith that little actions like recycling can make a difference if many people are doing the same thing together.