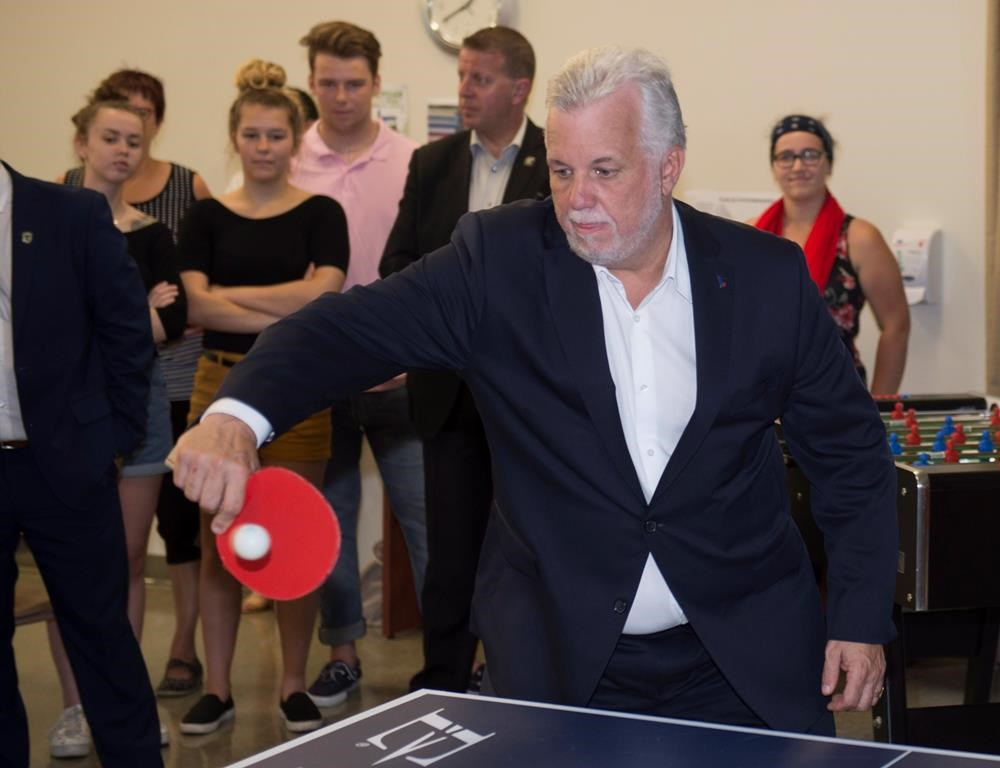 The surging Quebec economy took centre stage on Day 6 of the provincial election campaign Tuesday as the leaders of the two front-running parties each staked claims to being the man who can maintain the momentum.

The Liberals' Philippe Couillard lauded his government's performance over the last few years while at the same time trying to portray Coalition Avenir Quebec Leader Francois Legault as an economic liability.

"We are the party of the economy and we have proven it," Couillard said in Yamachiche in central Quebec.

"We have established one of the best economic and financial performances of recent history in Quebec. We have done this. I have done that."

Recent opinion polls have consistently placed the Coalition in first place and Couillard is no doubt hoping to narrow that gap before the Oct. 1 election by repeatedly hammering home the message of sound Liberal economic stewardship.

Couillard also accused Legault of failing to recognize what he called the major economic challenge facing Quebec — the existence of a labour shortage in the province.

"Mr. Legault and the CAQ (Coalition) may be the only persons in Quebec who cannot acknowledge there is a labour-shortage issue," he said. "So the big weakness of the CAQ for me is the economy and the big risk for Quebec for me is a CAQ government."

Legault, meanwhile, said the challenge is not just to increase the number of immigrants but to create conditions that allow for better integration into the labour market.

Legault accused Couillard of "panicking, as "one day I'm racist, the next I'm sexist and the next I don't know the economy."

The Coalition leader is certainly no business neophyte — he has a bachelor's and masters degree in business administration from HEC Montreal and co-founded Air Transat in the 1980s.

Legault, 61, also said Tuesday his government would shed 5,000 civil-service jobs through attrition, a move he estimates would save Quebec $380 million over four years without resulting in any cuts in services to the public.

He also said there are other ways to do away with waste.

"In the purchasing department, we think we can do better, that we can reduce those costs and making sure we have more competition in the bidders so we think there's a lot of money to save there," he said in Quebec City.

"We think we can save $1.2 billion a year, starting in the fourth year, without cutting any services."

That message did not sit well with the head of one labour group that represents about 40,000 Quebec government workers.

"Of course services to the public are going to be affected one way or the other," said Christian Daigle, president of the Syndicat de la fonction publique et parapublique du Quebec.

"The people who will be retiring aren't just people who write reports about reports, as characterized by Mr. Legault. They are inspectors, technicians, people who make sure Quebecers get their welfare payments."

Late on Tuesday, Legault lost a close ally as party president Stephane Le Bouyonnec quit and also stepped down as the candidate in the Montreal-area riding of La Prairie.

In a long Facebook message, Le Bouyonnec said he didn't want to be a distraction to the Coalition campaign and would not let opponents use his professional background for political attacks.

Following an investigation by Quebecor Media last June, Le Bouyonnec was forced to resign as head of a company that had ties to a firm that was charging predatory loan rates in Ontario.

Charging such rates in Quebec is illegal.

Culture was on the mind of Parti Quebecois Leader Jean-Francois Lisee as he said in Quebec City his government would offer a book written by a Quebec author to all elementary-school students every year.

He also resurrected the idea of introducing a floor price for books in order to protect small bookstores.

One of the boldest initiatives came from Quebec solidaire, which announced a plan to phase out gas-fuelled automobiles in the province by 2050.