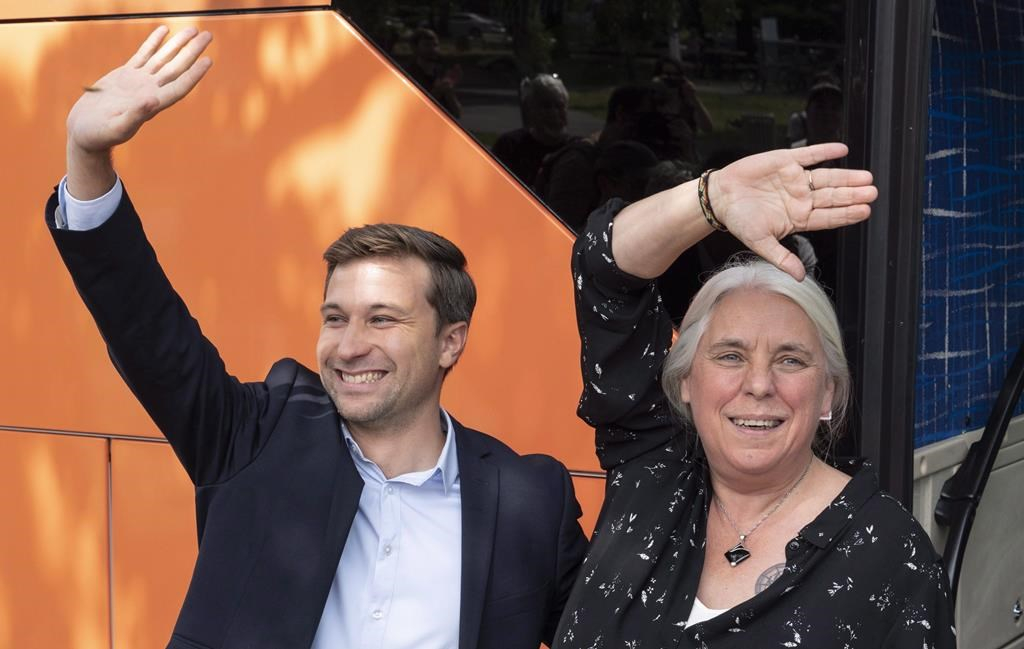 Quebec Solidaire co-spokesperson Gabriel Nadeau-Dubois and Manon Masse wave to supporters as they arrive to launch their campaign in Montreal on Thursday, August 23, 2018. Photo by The Canadian Press/Paul Chiasson
Previous story
Next story

On a late-summer evening in Montreal this week, with the humidex topping 30 C, Gabriel Nadeau-Dubois started knocking in earnest on doors in his riding.

Nadeau-Dubois, 28, is one of two spokespeople for Quebec solidaire, a left-wing sovereigntist party that had three of the 125 seats in the legislature when the provincial election campaign began last week.

Its promises are nothing less than radical and include free education all the way from elementary school to doctoral studies, and a ban on the sale of all non-hybrid or gasoline-fuelled vehicles by 2030.

And its two-page, costed financial platform promises to collect about $13 billion more a year to fill state coffers, mostly from wealthier Quebecers and large companies.

Television pundits barely conceal their smiles when they speak incredulously about Quebec solidaire's ideas or its chances of winning the Oct. 1 provincial election — but the party is no joke.

It has gathered hundreds of thousands of dollars in donations over the past few years in small, individual contributions and is growing in membership and influence.

Moreover, its support base is the same as the one that helped the Parti Quebecois begin its rise to power in the late 1960s and early '70s — young, educated, francophones in urban Montreal ridings who are ready to transform society.

As Nadeau-Dubois knocked on one apartment door inside a muggy hallway that offered little respite from the humidity outside, a barefooted young man answered and immediately recognized the former student leader.

That's because Nadeau-Dubois became famous in 2012 when students and their allies held daily street demonstrations that often attracted thousands and paralyzed parts of Montreal.

"To be honest, I'm undecided about whether I'll vote at all," said the young man, who explained he prefers a more proportional voting structure rather than the current first-past-the-post system.

"I don't find the system legitimate and I'm not sure I want to support it by voting — but I'm leaning in your direction," he said, as beads of sweat formed on his temple.

After sharing a few pleasantries, Nadeau-Dubois shook the man's hand and moved on.

Back outside, Nadeau-Dubois said he could have talked to the man for 15 minutes "and eventually convinced him to vote.

"But we'll let him take his time, reflect, and give him a call later on. It's clear he is favourable to us."

The story of Quebec solidaire's rise follows, in part, the tale of the PQ's fall.

In the early years, the PQ was the vehicle for many Quebecers' aspirations for a modern, progressive, vibrant — and independent society.

The party passed strict language legislation to help preserve the province's French identity and culture, was instrumental in the creation of the new civil code, reformed family law and initiated two failed referendums on Quebec sovereignty, in 1980 and 1995.

But since Lucien Bouchard took over the PQ in 1996 and it began a series of "neo-liberal policies" that included cuts to services, the party began to lose its way, said Paul Cliche, a founding member of Quebec solidaire, which formed in 2006.

Cliche said he knocked on doors in the riding of Mercier for famous Quebec poet Gerald Godin, who was among the early PQ members of the legislature, in the 1970s.

Mercier, which comprises Montreal's Plateau neighbourhood, was also the first riding Quebec solidaire won in 2008, and it borders Nadeau-Dubois' riding of Gouin, which he won with 69 per cent in a 2017 byelection.

Philippe Fournier, an astrophysicist who runs the poll-aggregating blog Qc125.com, said his projections currently give Quebec solidaire a fourth seat: the riding that borders Mercier to the east.

His calculations, however, also indicate the party is leading in two other bordering ridings — including the seat belonging to PQ Leader Jean-Francois Lisee.

While Quebec solidaire threatens the PQ's left-wing clientele on the island of Montreal, the Coalition Avenir Quebec is leading in two east-end PQ seats, according to Fournier's projections.

If Fournier's projections hold, the PQ could be wiped from the map in Montreal.

"It's amazing isn't it?" Fournier said in an interview. "This is a big generational change we're seeing. The PQ still has a lot of members and some popular support but it's not urban support anymore."

The diverging trajectories of Quebec solidaire and the PQ were reflected in their failed attempt last year at an electoral alliance.

Lisee tried hard to woo members of QS, but they soundly rejected the offer, despite having three seats in the legislature to the PQ's 28.

While both parties are sovereigntist, Quebec solidaire's motivation to separate from Canada is only a means to an end, said Francoise David, who resigned the Gouin riding in 2017 after holding it for the party since 2012.

QS wants Quebec to separate in order to make it a truly progressive, socially just and environmentally conscious society, she said.

David explained how ex-PQ leader Bernard Landry, premier between 2001 and 2003, said his dream was to see "Quebecois multinational companies."

"Quebec solidaire would never say that," she said. "Yes, we want companies, but as much as possible in the co-operative format with workers who are well treated."

Instead of a party leader, Quebec solidaire chooses one female and one male spokesperson, who will share governing tasks if the party wins power.

Back in the Gouin riding, the sun began to set but the humidity remained, as Nadeau-Dubois continued his door-knocking.

"People here are very educated but not very rich," he said. "It's shown that being educated sensitizes you to issues like the environment and social justice, equality of men and women.

"They know the importance of the redistribution of wealth."