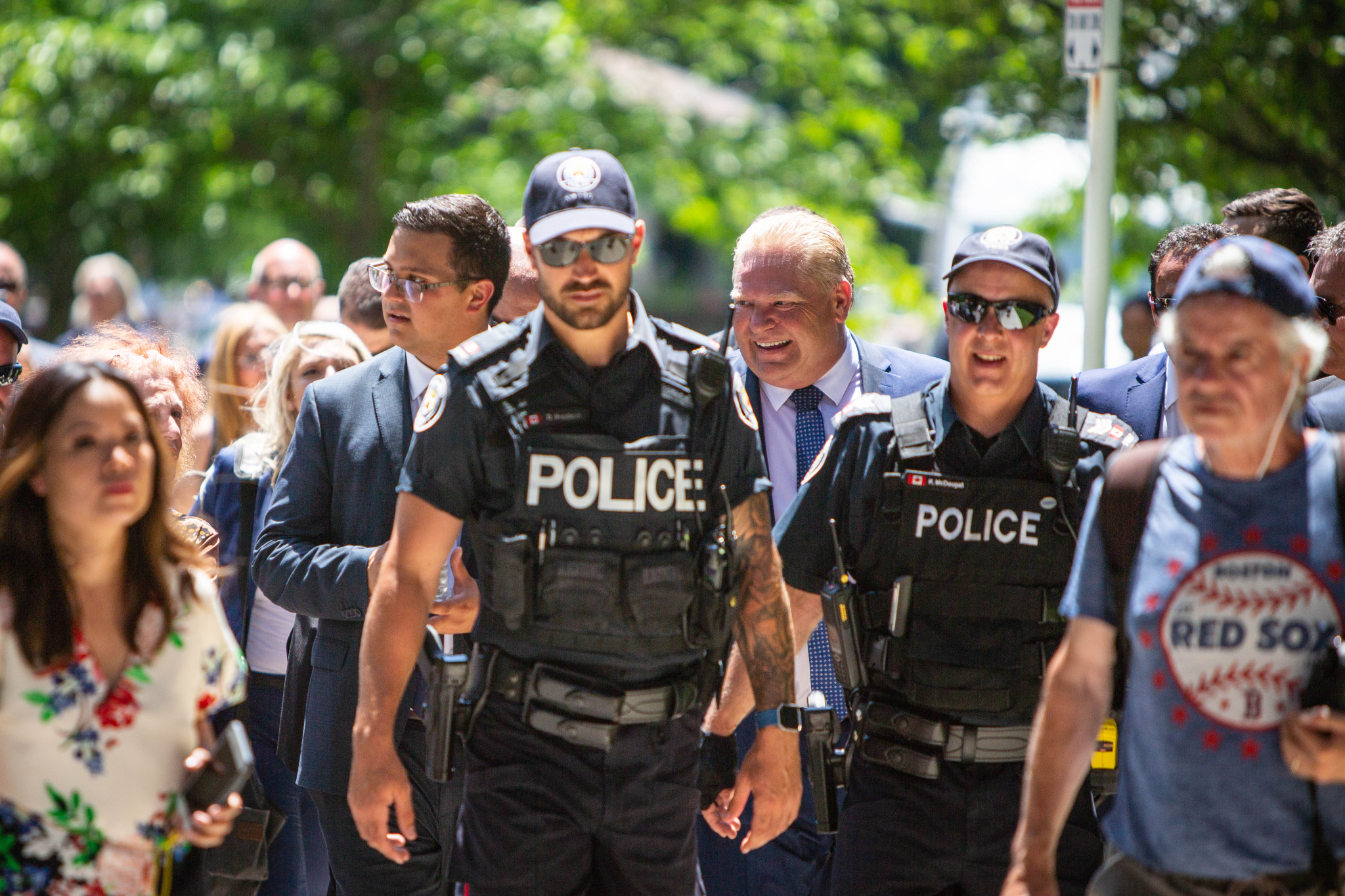 Premier Doug Ford behind a police line heading back to Queen's Park after meeting the crowd at his swearing in ceremony, in Toronto on June 28th 2018. File photo by Alex Tétreault
Previous story
Next story

Despite my partner’s terrible memory, he has never forgotten that time when, in Grade 11, his teacher aired A Clockwork Orange in class. A classmate’s mom got wind of it. She complained and, the story goes, the teacher was reprimanded.

Teachers stepping outside the boundaries of curriculum is nothing new and policies exist to help ensure there is a way to address infractions. Teaching is one of the few professions where pushing the limits can expand horizons. Teachers who cross boundaries can vastly improve educational quality and student experience. Indeed, innovation rarely happens at the direction of government.

Teachers are disciplined by management and through the Ontario College of Teachers in adherence with collective agreements. This clear structure negotiated by governments and unions over decades helps balance a teacher’s individual free expression with professional conduct and standards.

These negotiations help limit political reprisals against teachers, critical to ensure that they have the latitude to do their jobs with enthusiasm and creativity. For negotiations to be fair and successful, it’s assumed that the state acts with civility and professionalism, respecting contracts and the teachers’ professional body.

Ontario Premier Doug Ford has already thumbed his nose at protocol and contracts, and has engaged in a tremendous attack on the free speech and free expression of teachers. His government has already created a website where parents can lodge a complaint about what they think their children are being taught. They may to complain specifically about the content of sex ed classes, or in general.

'We are watching you'

The online snitch portal doesn’t tell parents what is considered acceptable, or unacceptable. It doesn’t explain what should be taught, and what’s outside of the curriculum. It also doesn’t explain what the remedies might be, aside from the promise that all comments will be shared with the Ontario College of Teachers. The website shows intent to police teachers’ behaviours and activities. It’s to say: we are watching you, and so, watch yourself.

Ford’s attack on free speech didn’t start, nor does it end there. In fact, attacking Ontarians’ free speech and free expression underpins his most troubling policies to date.

Stunningly, there was a directive telling certain bureaucrats to not use the term “climate change” on their social media channels. BlogTO broke the news, citing emails between Ministry of Natural Resources and Forestry staff. Global News reported that Ford’s office denied having issued this directive, but there’s no explanation for why the emails circulated in the first place. It was simply “a mistake.”

And, one of the Ford government’s first decisions was to impose binding arbitration to end a months-long strike at York University. Rather than leaning on administration negotiators to bargain in good faith, they put an end to the workers’ strike: an attack on free speech that is becoming more and more common of governments of all stripes.

"#Ontario Premier Doug #Ford has already thumbed his nose at protocol and contracts, and has engaged in a tremendous attack on the free speech and free expression of teachers." - @NoLore column in @NatObserver

Never mind the chaos faced by families and individuals as a result of Ford’s decision to cancel the Basic Income pilot. What worse attack on free expression can there be than the state providing an income program, which you budget and plan around, and then having it cancelled, leaving you and your family scrambling to survive, to eat, to pay rent or to move around.

Such attempts to control, coerce, punish, eliminate or otherwise chill open and free expression need to be called out as such. Ford’s tendencies are extremely troubling: in addition to these attacks, his promises will bring Ontario into the past at lightning speed. Limiting his critics through state measures is part of how he intends to do this with as little opposition as possible.

In absence of a loud opposition to these tactics, Ford’s attack on people’s free speech and free expression are going to accelerate. Making speech more difficult, more uncomfortable or, in the case of teachers, more dangerous, is already part of Ford’s strategy. As we aren’t even in the fall session of the legislature yet, it’s anyone’s guess how bad these attacks are going to get.

The right-wing frame of free speech says that university campuses are ground zero for attacks on free speech; that the most egregious attacks happen when progressive students organize, or when radical professors question neoliberal, capitalist logic. The campus scares right-wing politicians the most. And, just in time for the new school term, Ford’s government has issued a shocking directive to Ontario universities to police speech on campus.

His government directs universities to draft policies based on the principles of free expression that were written by the University of Chicago, and to punish students if they’re out of line with these policies. For example: “That existing student discipline measures apply to students whose actions are contrary to the policy (e.g., ongoing disruptive protesting that significantly interferes with the ability of an event to proceed).” Ford’s definition of free speech forbids student protest.

If a school doesn’t develop their policies, “the ministry may respond with reductions to their operating grant funding, proportional to the severity of non-compliance.”

That’s because speech that challenges power is the speech that we must most vigorously defend. Speech directed by government that’s called “free speech” is an Orwellian play on language: by using the vocabulary, Ford is hoping to trick most Ontarians into thinking he’s protecting speech, while students’ and professors’ free expression could easily put their institutions’ funding into jeopardy.

While the next four years are surely going to be crisis after crisis, Ontarians will be smart to pay close attention to these attacks on free speech and free expression, and intensely organize against them.

I am so sorry to hear this.

I am so sorry to hear this. I was very disappointed about the curriculum issue, and now this! I am no longer living in Ontario, but it's my "home" province. I'm sorry. But maybe it will encourage young people, if they don't get brain-washed first, to care, and express their concern!

When politicians rely on fake

When politicians rely on fake news, outright lies and the machinations of their greedy supporters you can bet their jurisdiction will rapidly go to hell in a handcart. The illustrative photo is a foreboding one - even if the police involved were co-opted rather than volunteers. It is a chilling message for two macho, white police in all their gear to be apparently protecting an elected official whose worst enemy is himself. Luckily they were wearing sunglasses so perhaps they will escape the contempt and suspicion of ordidnary citizens who rightfully fear "police states".

Let's face it. This is how

Let's face it. This is how radical conservatives have always governed. What's refreshing about the current slate of hate speech is free speech, bully speech is free speech.......but speech critical of dominant power arrangements threatens free speech. Those boys like to lecture...to be the only ones with Voice...and they have no tolerance for disagreement.

Look at the travesty they called consultation with native people. One way info sessions....or note taking listening sessions. They rule by refusing to engage........and be intimidating anyone who does.

But the frightening thing for me, is that Ontario people elected them. We need to focus less on the demagogue bozo's the right is selecting to lead the charge..........and more on why ordinary people...in both the US. and Canada........are desperate enough to want to vote for an autocratic daddy figure with no qualifications for the job??? What is missing in our analysis there?

And please. Lets not dismiss them as bigots or morons. They may just be victims of an economic system they haven't had the freedom of speech to figure out. I hope teachers defy this current ignoramus...but I'm far from confident they will.

Wish there was a way to edit.

Wish there was a way to edit. What I meant to say in the comment above...was that its refreshing how out in the open their defence of hate speech but repression of critical speech is. Bullying those we disagree with is okay by them. Participating in speech critical of the status quo...or protesting right wing blather, is the crime. And its right out there in the open...for all of us to see...with Trump to the south and Ford in eastern Canada. We all need to pay attention and figure it out............current neoliberal policies are in deep crisis....perhaps only totalitarianism can keep them running into the future.

Are we okay with that? Maybe.