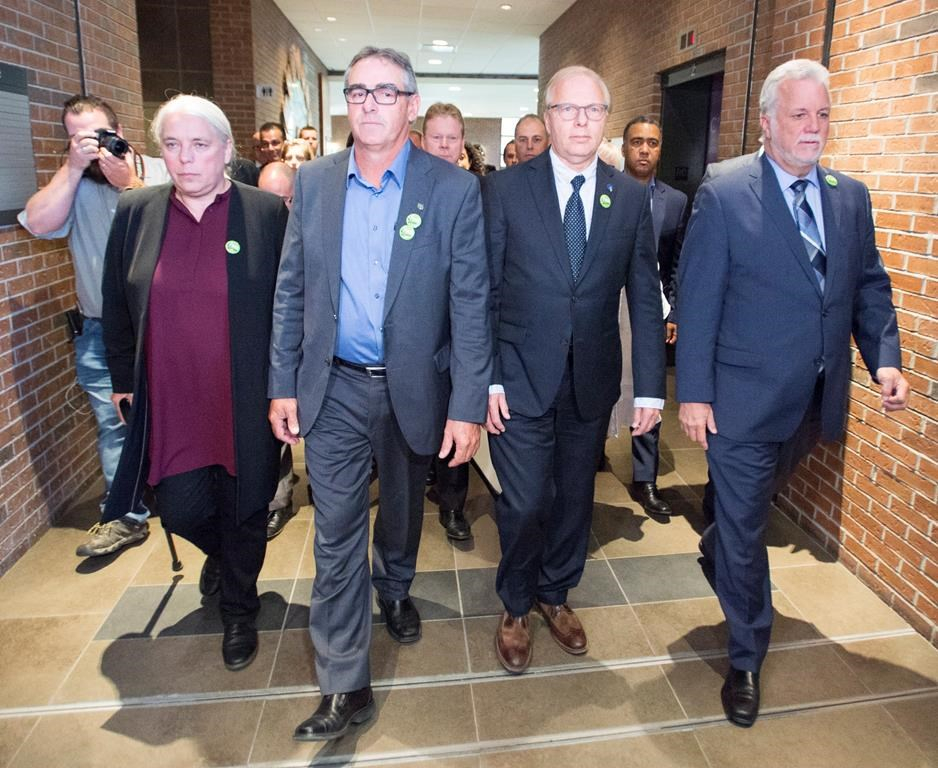 The leaders of Quebec's main political parties spoke in unison Friday to defend supply management and send a message to federal negotiators as they held free-trade talks with their U.S. counterparts in Washington, D.C.

Three of the four party leaders rejigged their election campaign schedules to attend an announcement at the Montreal-area headquarters of the Union des producteurs agricoles, which represents Quebec farmers.

Roughly 60 per cent of Quebec agriculture interests are affected by supply management, which controls the production of dairy, eggs and poultry. But as part of the trade talks, the United States wants access to the protected Canadian dairy market for its own oversupply.

Liberal Leader Philippe Couillard said he would reject any trade agreement not accepted by the province's dairy producers.

"It was very clearly said that we will defend supply management, which is not an old system — it's a modern system," Couillard told reporters. "There's no text in the world that says Quebec and Canada should be the dumping ground of (dairy) oversupply from the USA."

Removing the system could prove dire for Quebec farmers, he said.

"It (the industry) will just disappear — it would crumble completely," he said. "We produce 50 per cent of Canada's milk and we basically use ... maybe 25 per cent, so at least half of the farms would disappear and it's all in our regions."

While U.S. President Donald Trump had set a Friday deadline to reach an agreement with Canada, Foreign Affairs Minister Chrystia Freeland held a late afternoon news conference to say the negotiations will resume next week.

Prime Minister Justin Trudeau has said previously he will not dismantle supply management and Couillard said his appearance alongside two political rivals was a message to federal officials overseeing the talks.

"If the opinion of the second-largest province cannot be heard, that's a problem," Couillard said. "If a lot of attention was put for the auto industry, that's great, but this is as important for Quebec as the auto industry is for Ontario."

Lisee said it's clear Quebec shouldn't have to bear the brunt of compromise at the negotiating table.

"We're saying fine, we don't want to take anything out of Ontario, but don't push on Quebec's interests," Lisee said. "If this country works, the interest of the West, Quebec and Ontario will be served equally and that's not what I'm seeing today."

Also in attendance at Friday's event was the agriculture critic for the Coalition Avenir Quebec. Leader Francois Legault defended supply management as he campaigned in the Saguenay region.