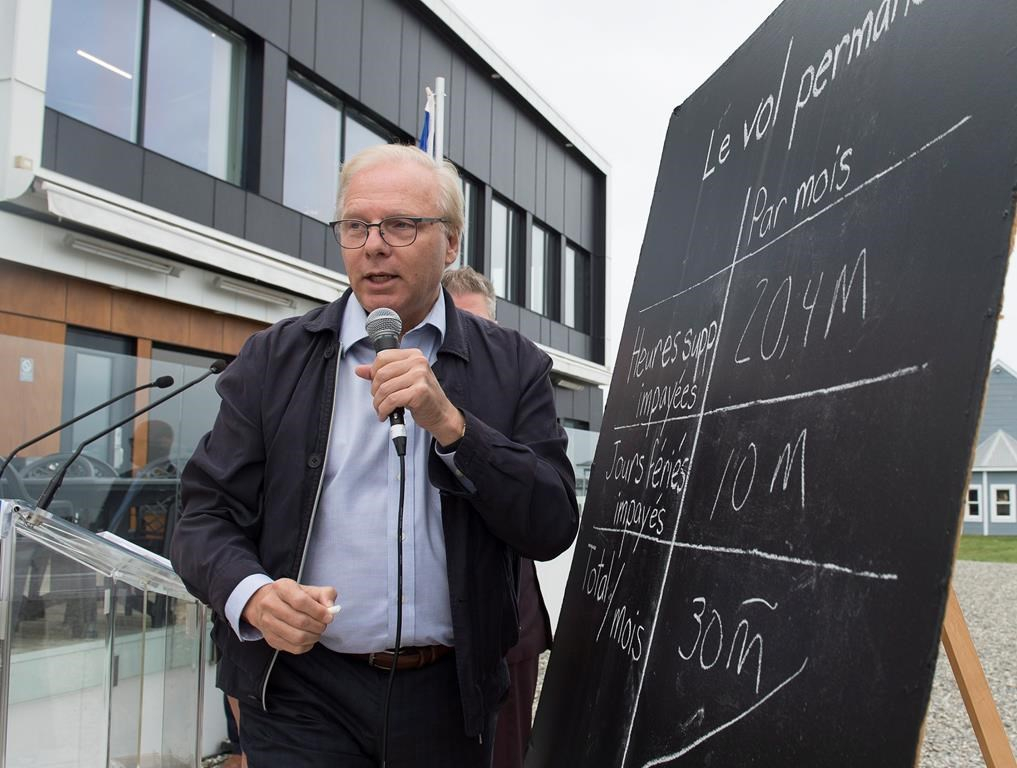 Quebec's campaigning politicians appealed to workers on Labour Day Monday, with two parties promising to raise the minimum wage to $15 per hour.

On Day 12 of the provincial election campaign, Parti Quebecois Leader Jean-Francois Lisee said the starting wage would be raised gradually from the current rate of $12 per hour in a first mandate.

Lisee said his party had always been close to workers, despite the fact that his predecessor, media magnate Pierre Karl Peladeau, presided over lenthy labour disputes with two of the newspapers in his chain.

Peladeau led the party from 2015 to 2016 before quitting politics for family reasons.

Lisee acknowledged that the party's pro-worker stance might be more apparent in the absence of its former leader, while denying anything had fundamentally changed with the party that has traditionally been a favourite choice of the province's unions.

"It might have been harder to see, with the last leader, but the party itself, the members themselves, our closeness towards those who work hard has always been there, and perhaps it's more apparent now," Lisee said at a news conference where he also unrolled a plan to create a group insurance plan for the self-employed.

The left-wing party Quebec solidaire also expressed its commitment to a $15 minimum wage, which the party has long called for and would implement in 2019 if elected, co-spokesperson Manon Masse said Monday, detailing the plan.

The party would also invest $100 million per year over five years to help smaller businesses, farmers and community organizations adjust to the change, Masse announced in Gatineau.

That would bring his party's total investment to $500 million and would ensure all the province would be covered by 2020, he said at a campaign stop in Iles-de-la-Madeleine.

If re-elected, Couillard also promised to name a minister of the regions whose mandate would include the development of high-performing digital infrastructure.

Coalition Leader Francois Legault was in the Montreal area, where he announced that former legislature member Christian Dube would leave his job with Quebec's pension fund manager to run for a seat in the La Prairie riding.

Dube previously represented a different riding in the legislature between 2012 and 2014 before resigning to become executive vice-president of the Caisse de depot et placement du Quebec.

He replaces former party president Stephane Le Bouyonnec, who unexpectedly quit both the race and his position with the party last week.

At the announcement of his candidacy, Dube placed his hand on his heart and solemnly promised he would complete his four-year mandate if elected, regardless of whether his party wins.

He insisted his return to politics was based on Le Bouyonnec's departure rather than polls that suggest the party may form the next government.

"It had nothing to do with polls, because if it was polls, I'd have jumped in a month and a half ago," he told reporters.

Dube's choice to resign his seat shortly into his second mandate in 2014 triggered a byelection that cost Quebec taxpayers an estimated $600,000.

The 61-year-old businessman said Monday he had not asked for a cabinet post in a future Coalition government as a condition of his return.

— With files from Caroline Plante in La Prairie, Stephanie Marin in Matane and Patrice Bergeron in Iles-de-la-Madeleine

The irony in Quebec politics: Which party deserves the title of most 'progressive'?