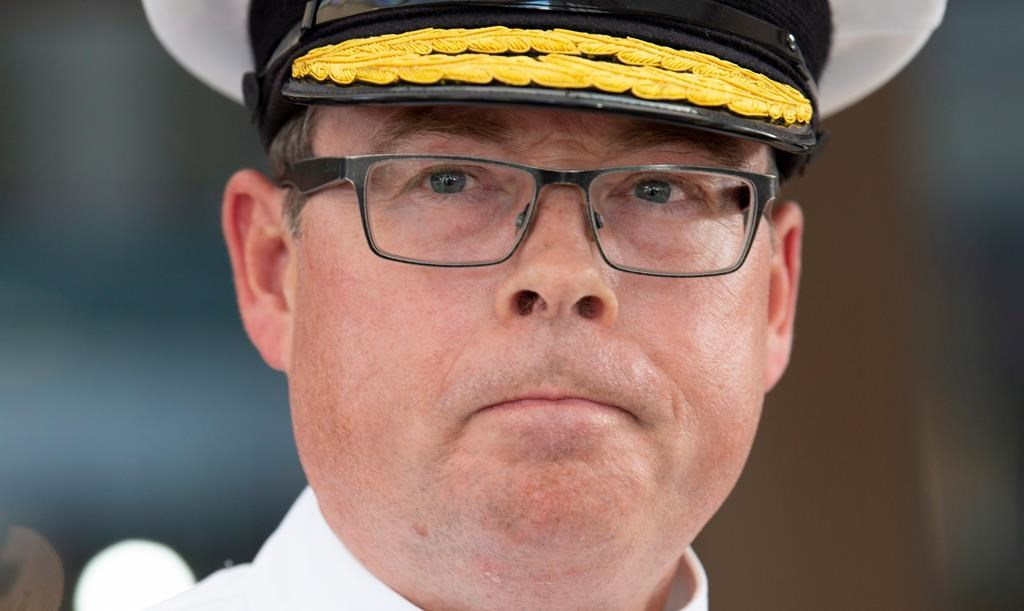 Vice-Admiral Mark Norman speaks with reporters following an appearance at court in Ottawa, on Tuesday, Sept. 4, 2018. Photo by The Canadian Press/Adrian Wyld
Previous story
Next story

The federal Liberals are being accused of withholding secret documents in the politically charged case against one of the military's most senior leaders, Vice-Admiral Mark Norman, whose criminal trial is set to run through next year's election.

Norman's high-profile lawyer, Marie Henein, issued the complaint against the government during a hearing Tuesday inside an Ottawa courtroom packed with supporters, including a number of former military officers and industry representatives.

The military suspended Norman in January 2017 as the second-in-command of the Canadian Armed Forces. He was charged earlier this year with one count of breach of trust for allegedly leaking government secrets — known as "cabinet confidences" — to a Quebec shipyard. He has denied any wrongdoing.

The Opposition Conservatives and many of Norman's supporters have accused the Liberals of political interference in the case, with some suggesting Norman has been charged unfairly.

Henein said she has repeatedly asked the government to be able to access documents labelled as cabinet confidences "so that we can defend this case and so that we can see the full story."

But she said she has yet to receive a response from the government, and that she is prepared to address the issue with the court if the government continues to drag its feet.

"It's quite an extraordinary prosecution where really the complainant's deciding what we get to look at, what's important and what's not," she said outside the courthouse.

Documents protected by cabinet confidence are considered political secrets. Usually prepared for ministers to help with government deliberations and decision-making, they are legally protected from unauthorized release.

Defence Minister Harjit Sajjan's spokeswoman, Byrne Furlong, refused to comment on Tuesday "as the matter is with the justice system."

Norman's trial is scheduled to start Aug. 19, 2019 and is expected to last seven or eight weeks.

Justice Norman Boxall noted the court could hear the case earlier, but he ultimately agreed to Henein's proposed schedule — meaning much of the trial will coincide with next year's federal election.

Henein denied wanting the trial at a time that would be politically sensitive for the Liberals, saying the schedule was intended to allow other court procedures in the case to play out.

She wouldn't say whether she intended to call politicians or other military officers as witnesses. When asked how the trial could be affected by its concurrence with the election campaign, Henein said: "I don't know. You'd have to ask the prime minister about that."

For his part, Norman said he was happy dates had been set for the trial even as he thanked "the literally thousands of Canadians out there who are supporting me.

"This has been a really difficult time and it's going to continue to be a real challenge and I just want to know how much that support means to me and my family."

Norman was charged with one count of breach of trust earlier this year for allegedly leaking the Liberal government's decision to pause and review a $700-million shipbuilding project for the navy in November 2015.

The secrets were allegedly leaked to Quebec-based Davie Shipbuilding in what the RCMP has suggested was an attempt to pressure the Liberals into continuing the project, which involved converting a civilian ship into a new resupply vessel for the navy.

The Liberals ultimately decided to continue with the project and the vessel is now being used on naval operations. This summer, the government contracted Davie to convert and sell three used icebreakers to the Canadian Coast Guard.

Norman was replaced as vice-chief of the defence staff in July, but remains a member of the military pending the results of his trial.

My maratime friends have always been extremely cynical about the politics of Naval procurement - no matter which combination of political parties might be involved. Decisions on ship-building that have been disasters are balanced against the few contracts that are successful. All have been sources of resigned outrage within the groups who folllow the shenanigans. Every contract is first and foremost a political ploy with little or no regard to what the Navy actually needs. Seems eerily like the negotiations vis-a-vis the Tar sands.