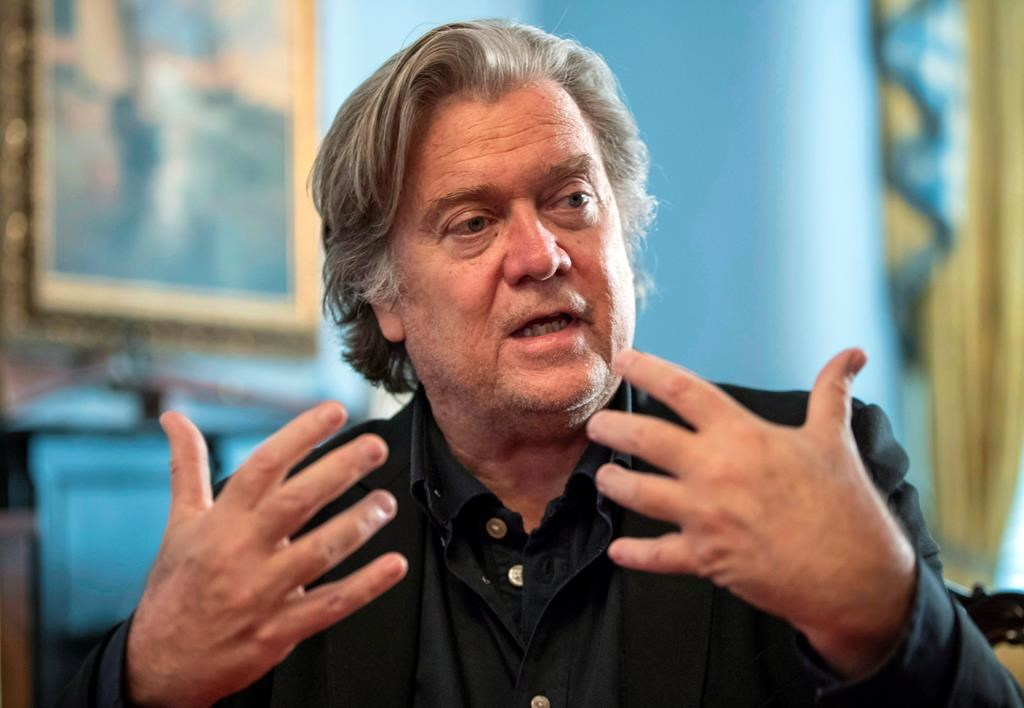 Steve Bannon, the controversial former strategist for U.S. President Donald Trump, is set to defend the issue of populism in a debate with conservative commentator David Frum in Toronto this fall.

The announcement of the event — part of the Munk Debates — comes days after Bannon was dropped from the speakers list at next month's New Yorker Festival following intense backlash and threats of a boycott by other guests.

Munk organizers announced Wednesday that Bannon is expected to argue in favour of the proposition that "the future of western politics is populist, not liberal" at the debate on Nov. 2.

Rudyard Griffiths, the debates' organizer and chair, said the event, which is scheduled days before the U.S. midterm elections, will showcase the two men's "sharply different views" on the surging populist movement and its impact on Western politics.

"We believe we are providing a public service by allowing their ideas to be vigorously contested and letting the public draw their own conclusions from the debate," he said in a statement.

"In our increasingly polarized societies we often struggle to see across ideological and moral divides. Civil and substantive public debate of the big issues of our time helps all of us better understand the challenges we face as a society and what, if anything, can be done to resolve them."

Frum, a senior editor at The Atlantic magazine, was a speechwriter for former president George W. Bush and is the author of the recent book "Trumpocracy." He said the planned debate with Bannon would be an important discussion.

"Liberal democracy is founded on the belief that free people can be inspired to make wiser choices by words and ideas," he wrote in statement posted on Twitter. "Mr. Bannon comes to the prestigious Munk platform because he believes his words can persuade people to follow him. I will face him there because I believe democratic ideas can defeat him."

The New Yorker's announcement Monday that Bannon was invited, then un-invited, to the magazine's festival set off a heated debate about whether it was better to challenge or shun Bannon.

Bannon, meanwhile, said in a statement Monday that he had welcomed the opportunity to face off with the magazine's editor, David Remnick.

"The reason for my acceptance was simple: I would be facing one of the most fearless journalists of his generation," Bannon said. "In what I would call a defining moment, David Remnick showed that he was gutless when confronted by the howling mob."

Bannon is still set to speak at a festival hosted by The Economist later this month.

Zanny Minton Beddoes, the editor-in-chief of the magazine, said she was deeply troubled by Bannon's far right stances but believed open debate was more important.

Beddoes will be interviewing Bannon in New York on Sept. 15 at The Economist's "Open Future" gathering. Some speakers at the event have cancelled because of Bannon.

I'm conflicted. ANY forum you

I'm conflicted. ANY forum you give this bannock guy will be used to feed his base out of context. Boycotting him is best.

This is a disgraceful

This is a disgraceful decision on the part of the Munk debates. Mind you, they've shown themselves comfortable hosting war criminals -- Henry Kissinger, Tony Blair -- so why not Trump's white supremacist enabler, Bannon, & Bush's Iraq War cheerleader, David Frum.