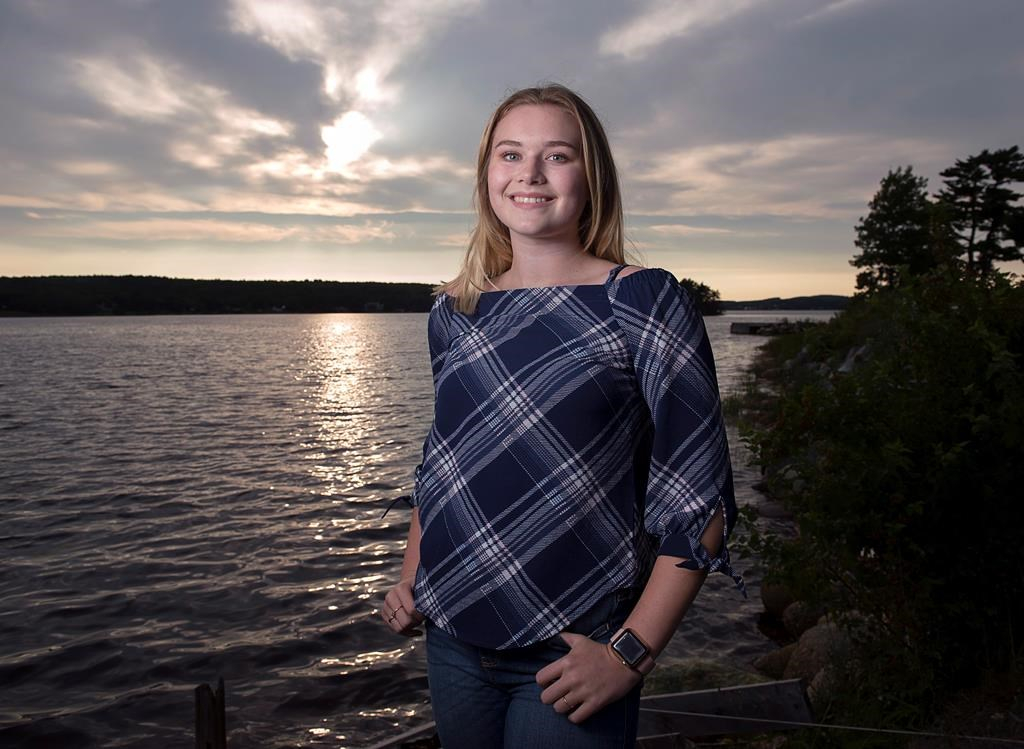 Stella Bowles, a teenage environmental crusader, stands by the LaHave River near her home in Upper LaHave, N.S. on Thursday, Aug. 23, 2018. File photo by The Canadian Press/Andrew Vaughan
Previous story
Next story

Stella Bowles has won national science prizes and public service awards. She has a scholarship lined up from Western University, and a book about her work is being published this month.

Her story began with a science fair project on the raw sewage that was fouling her local river. It became a cause that made headlines across North America — and prompted governments to ante up more than $15 million to replace all the illegal straight pipes in Nova Scotia.

"This was supposed to be a Grade 6 science fair project, you did it, it's done, it's over," said Stella.

"But it became a lot more than that."

Stella has become a household name in Nova Scotia, but her story is poised to reach a wider audience with a book written in her voice by author Anne Laurel Carter, titled "My River: Cleaning up the LaHave River."

It will be released in Canada on Sept. 25, and the U.S. next spring.

Stella was 11 years old when she learned that straight pipes were pumping raw sewage from her neighbours' houses into the LaHave River on Nova Scotia's South Shore.

Her science fair project, titled "Oh Poop! It's Worse Than I Thought," presented her findings of dangerous levels of fecal matter in the river.

Not satisfied with just a school project, she launched a campaign that not only pressured governments but also inspired an anonymous donor to give $1 million to the cause.

The process has been slow, but Stella said she's seen the arrival of about 30 new sewage tanks on people's lawns.

When she first saw her results showing the water's toxicity levels, Stella was eager to spread the word to as many people as possible.

So she made a sign, mounted on her family's property, spelling out in capital letters: "THIS RIVER IS CONTAMINATED WITH FECAL BACTERIA."

The sign wasn't enough for Stella. Her mother, Andrea Conrad, eventually agreed to start a Facebook page when the family couldn't drive down the road without Stella wanting to hop out and deter swimmers.

"She wanted us to stop every kilometre or so to warn people to get out of the water," Conrad said. "We said 'We can't do that Stella, people don't like that.'"

The two started a Facebook page, her research went viral, and the rest is history.

Stella wasn't the first person to advocate for removing the hundreds of straight pipes polluting Nova Scotia's rivers, but she emerged as the perfect person to champion the cause.

David Maxwell, a retired physician who lives down the street from Stella, was equally startled when he learned the house he'd bought used a straight pipe.

For years, Maxwell and a group of concerned citizens brought their own findings and concerns to the provincial government but were met with a lacklustre response.

When Stella came looking for a way to pitch in, Maxwell mentored her in gathering samples from the river, and encouraged her to turn her work into a science project.

Maxwell said Stella presented an immovable force for government to reckon with: a smart, tech-savvy, outspoken kid who politicians were unable to ignore.

"She presented herself as the kid who says the emperor has no clothes," said Maxwell.

"They could ignore us, but they didn't know what the hell to do with an 11-year-old kid making a very loud, public statement."

Her activism also caught the attention of Anne Laurel Carter, the author who would eventually write 'My River' with Stella.

Carter, who splits her time between the South Shore and Toronto, was swimming off her property's dock when a neighbour drove over and said 'Get out of the water Anne, haven't you seen Stella's sign?"

She approached the family about collaborating, and wrote the book as a first-person narrative from Stella's point of view, after meticulous research and a series of interviews with her.

The book was written with kids in Grade 5 and up in mind, but Carter thinks it has universal appeal.

"It's a wonderful Canadian story. She made me inspired about the future," said Carter.

Carter and Stella will split royalties from the book, and have a number of readings planned at local bookstores this fall.

In the meantime, Stella is still advocating for legislative changes that would require straight pipes be replaced upon the sale of a home.

She's also touring the province speaking to other students and handing out kits, so they can test their own waterways for pollution.

Stella's work has pushed her into roles she never would have imagined. She thinks town council meetings are more than a little dry, but she's discovered a talent for public speaking.

She's considered pursuing environmental law as a future career, but at 14 she has plenty of time to decide.

She knows, though, the message she hopes people can take away from her story: "Science is fun, and kids can make a difference."

Ten years after harbour cleanup, can Haligonians be coaxed into the water?