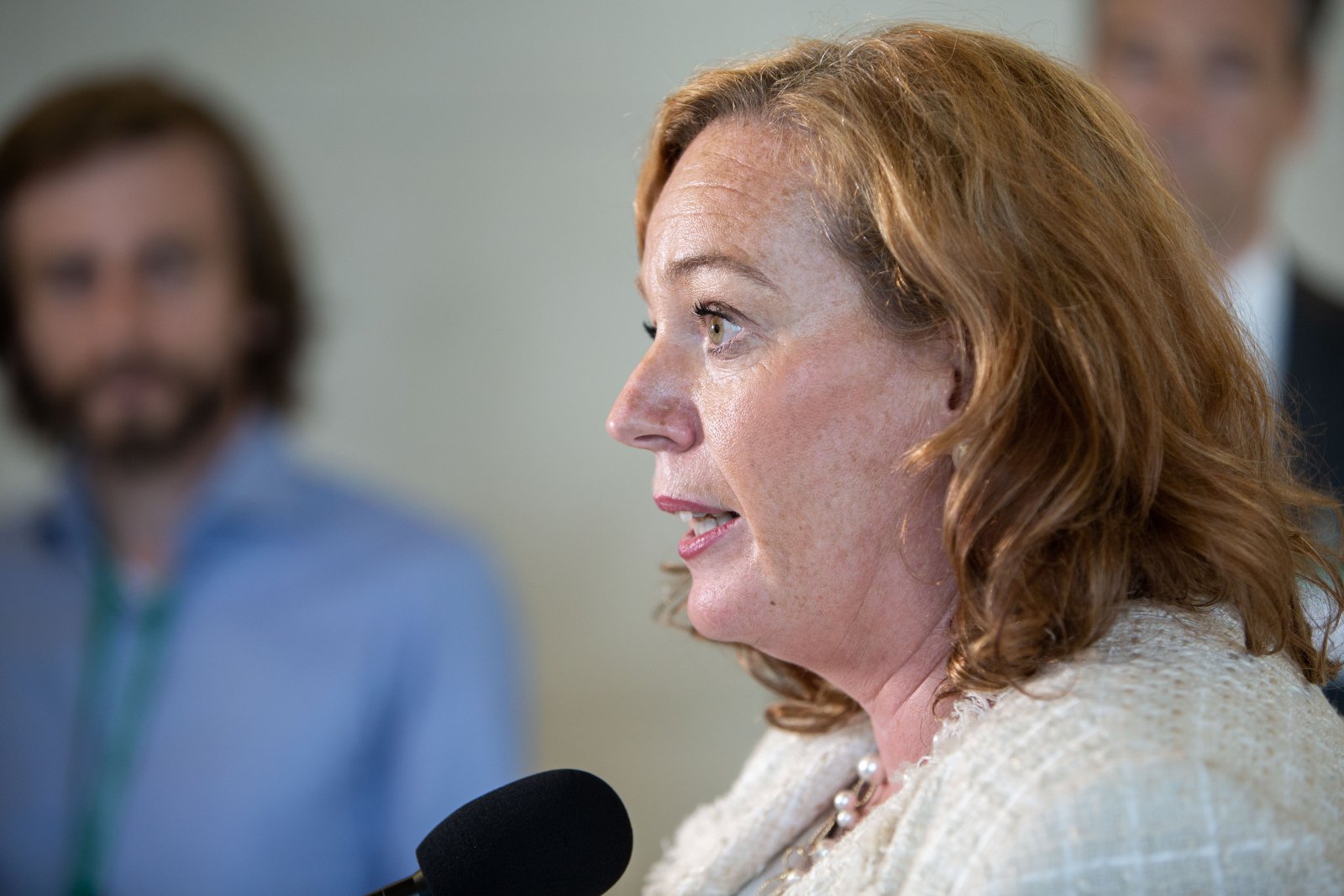 Ontario’s social services minister on Tuesday defended the Ford government’s intent to suspend constitutional rights, following a speech where she discussed the welfare of citizens.

Lisa MacLeod was speaking at an Ottawa Board of Trade event on Sept. 11, the morning after Ontario Premier Doug Ford said he’d invoke the constitution’s notwithstanding clause, something never before done in the province, in order to override a court ruling.

“The Canadian constitution’s very clear, section 92, that municipalities are creatures of the province,” said MacLeod after her speech, in response to National Observer questions about the Ford government’s threat to suspend rights.

Bill 5, the legislation that cut the number of Toronto wards from 47 to 25, was struck down Monday by an Ontario Superior Court judge on the basis that it violated freedom of expression.

In response, Ford said he would implement the changes anyway, in essence ignoring the courts, because he was elected on a mandate to reduce the size of government.

Former Ontario premier Bob Rae has compared that to living in an "elected dictatorship." And speaking at a separate event in Ottawa, former prime minister Brian Mulroney said he would have "difficulty with anybody invoking a provision that would override the Supreme Court of Canada."

Asked on Tuesday whether she felt she had campaigned on suspending constitutional rights, MacLeod said “the Ford administration campaigned on making government more affordable, and more efficient.”

Our Attorney General. Those interested in constitutional history and matters may recall who our PM was during the last rounds of constitutional talks. Our Province does have exclusive jurisdiction over all municipalities, this includes Toronto. https://t.co/yvTuKgNjQu

'I have nothing more to add'

The minister also suggested that the political battle over Bill 5 was similar to the battle over municipal amalgamation in the late 1990s.

“We put forward a bill, a piece of legislation, Bill 5, and constitutionally we have the right to make decisions on municipalities, as we did here in 2000 when we amalgamated Ottawa,” she said.

If the government moves to invoke the constitutional override, it would throw another wrinkle into a Toronto election campaign less than six weeks away from voting day, Oct. 22.

Mulroney's daughter, Caroline Mulroney, is Ontario's attorney general. The senior Mulroney said he hadn't discussed the issue with her.

MacLeod — who, in addition to social services, is the minister of children, community, women’s issues and immigration — wouldn’t answer directly if she would support suspending constitutional rights to protect the government’s rollback of Ontario’s sex education to a curriculum from the 1990s.

“The government’s made a decision on the notwithstanding clause with respect to Bill 5, and that’s what we’ll go back to the legislature for tomorrow,” she said after being asked about the sex-ed policy and the Constitution.

Pressed again, she echoed her comments: “The government made a decision yesterday that we’re going to support the notwithstanding clause for Bill 5. I have nothing more to add on the constitutional issues.”

The event, called the Mayor’s Breakfast and attended by Ottawa Mayor Jim Watson, brought together a number of local business leaders.

Ford hinted to a radio station on Monday evening that he's been getting pressure to cut Ottawa city council similar to the way his government wants to cut Toronto, but that he had no plans to do so for now.

“Second to Toronto, the number one amount of calls...is from the Ottawa and Ottawa region talking about that but, for now, we’re going to leave well enough alone," he said.

If Ottawa were required to comply with Bill 5 and base its ward boundaries on federal and provincial riding lines, the number of wards would likely drop from 23 to eight.

But MacLeod, who is the MPP for Nepean-Carleton in Ottawa’s southwest, emphasized the government wasn’t about to do that.

“I know, having spoken with the premier's office last night, there's zero intention to reduce the size of city council here,” she said.

The Premier was clear in his AMO speech that he has no intention to reduce the size of council in Ottawa.

'The best social program is a job'

Before her political career, MacLeod worked as a city bureaucrat in Ottawa. In her speech she said she learned public service and how to “leverage relationships” from her time working for the city.

She said the Ford government was elected “overwhelmingly by the people, for the people" and assured the crowd that “I am Ottawa’s voice at Queen’s Park, not the other way around.”

"He truly is a premier for the people," she enthused.

MacLeod also commented on the Ontario government's battle with the federal government over immigration issues. Ontario is a "welcoming place for immigrants and refugees,” she began, but added later that she had tried to have a conversation with the Trudeau government about its “failed border policies.”

Much of her speech was devoted to the welfare of citizens. She said one in seven Ontarians was “living in poverty” and that she took issue with “siloed” social programs that weren’t, in her eyes, getting the job done.

"If conservatives realize they cannot win democratically they will not abandon conservatism. They will abandon democracy."

First of all, let's dispel

First of all, let's dispel this myth that the Ford government was "overwhelmingly" elected by Ontario voters. Unless I'm misinformed - despite the "millions" they keep referring to - Ford received votes from only 23% of eligible voters in Ontario. Ford's campaign was so cloaked in confusion, refusal to engage and misinformation it is no wonder voters gave up in disgust and stayed away from the polls in droves. The fragmentation of the opposition allowed another underrepresentational government to slither into the halls of power. Ford is the best argument I've yet heard for Proportional Representation.
Secondly, the campaign by the PC's was a one man IED - a perfect storm of non-responsiveness to legitimate questions and confusing, meandering, internally contradictory statements which he refused to clarify. Rather than contructive programs, the PC's as led by Ford, focussed wholly on destructive, backward thinking that never addressed the very real existential problems facing this province, nation and global community. Granted it takes extraordinary individuals to show leadership in times like these - and extraordinary is always thin on the ground. Ford/PC's are the opposite of extraordinary - they are banal, devoid of confidence inspiring ideas. They represent the banality of stagnation and evil.

Actually, this disaster is a

Actually, this disaster is a strong argument against PR because it opens the door to ever more `Doug-types'.
PR sounds like a good idea, but, in practice it leads to even more fragmentation of government and leads to permanent deal-making that seldom satisfies the notion of good and fair governing for all.
Ranked ballot, on the other hand, might have seen Ontario with a more balanced House. Remember that Doug and his Slugs got in because they courted the very right-wing community (see sex ed kerfuffle for example) and they're paying them back, as promised - somewhere.
Ontario is in trouble because they couldn't believe this guy had a chance. Let's hope he is a corrector, like that guy down South. It shouldn't take more than one term to see the PCs off for a long time again, as it was after the Harris `Common Sense Revolution' that gutted the province with its ideology. Hopefully, voters will see that this guy and gang have zero respect for us and democratic institutions and use the experience as a learning opportunity.

Proportional Representation opens the door to more types from the political spectrum. As well, if done properly, voters have a choice of which PC, Liberal. NDP, Green, etc and independant candidates are elected. Under PR Mr. Ford would not have a majority, and might not even form government as he would need support from other MPPs to form one.