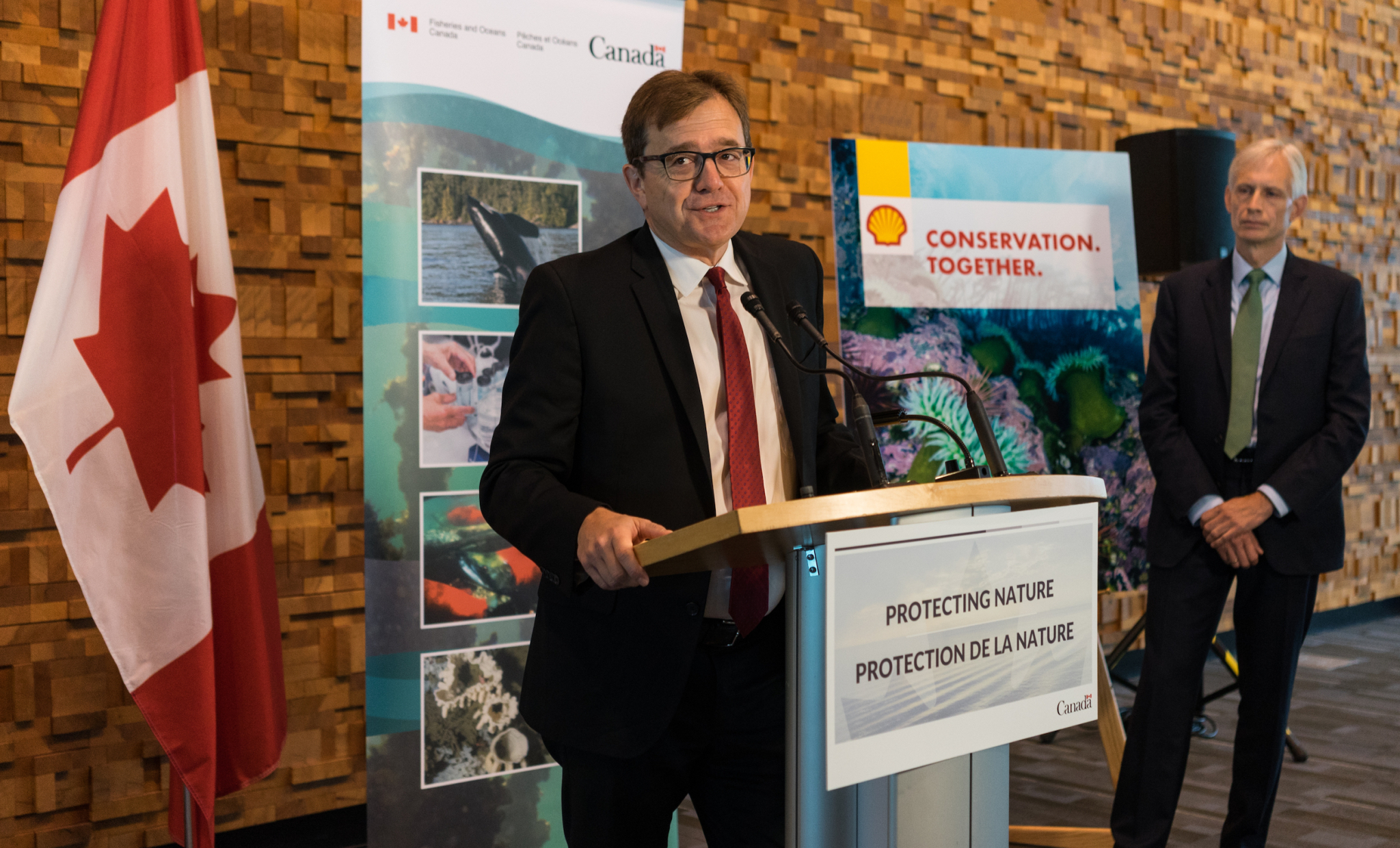 The Canadian affiliate of one of the world's largest oil companies, Royal Dutch Shell, is releasing 50,000 square kilometres of offshore exploration permits off the coast of British Columbia and promoting conservation.

Shell Canada president Michael Crothers made the announcement in Vancouver on Thursday alongside Fisheries, Oceans, and the Canadian Coast Guard Minister Jonathan Wilkinson.

Crothers said that there are “definitely hydrocarbon systems there,” but that Shell has “no plans to [drill] off the coast of B.C.”

“Shell has had a long history of voluntary conservation in Canada, and this is the logical next step," Crothers said.

“Rather than continue to hold these lands, we plan to formally release them, and work with the government of Canada, with the province, with Indigenous peoples, and environmental groups, to see how we can be a catalyst of additional conservation all along the west coast.”

Crothers added that they don't intend to request any financial compensation, and that "any compensation we would receive we would redirect back to this framework working with First Nations communities and the government."

Although unexpected, this isn’t the first time Shell Canada has released drilling rights for conservation purposes. In 2016, Shell relinquished a large swath of drilling rights in the Canadian Arctic, off the coast of Baffin Island, equivalent to an area larger than Banff National Park.

“We have made a commitment to meeting Canada’s target of protecting 10 per cent of coastal and marine areas by 2020,” Wilkinson stated.

Wilkinson said that the new Scott Islands marine National Wildlife Area brings Canada up to 7.8 per cent protection, and that before the Liberal government was elected in 2015, that number was around one per cent.

The Scott Islands, located off the northwestern tip of Vancouver Island, are home to the largest and most diverse seabird colonies in B.C, sustaining nearly 40 per cent of all of the province’s sea birds, while also acting as a pit stop for nearly 10 million migratory birds.

Along with birds, the Scott Islands are home to a wide variety of marine mammals and fish, including many species at risk such as the southern resident killer whales.

The southern resident killer whales, whose population has dwindled to just 75 individuals, is a major focus of conservation efforts and Wilkinson said the government is prepared to restrict salmon fishing (the main food source of these whales) in order to protect them.

“We’ve identified a couple of new areas of critical habitat just a week ago where there will be a process we’ll be gong through to identify if additional restrictions on fishing will happen,” Wilkinson stated.

The Government of Canada will provide $3.2 million in funding for the management of this National Wildlife Area through Canada’s Natural Legacy, which is a commitment that by 2020, at least “at least 17 per cent of terrestrial areas and inland water, and 10% of coastal and marine areas, are conserved through networks of protected areas and other effective area-based conservation measures.”

Where are all these billions

Where are all these billions coming from? Oops, I forgot. Us.

Finally a hopeful story from

Finally a hopeful story from a major oil company! Cudos to Shell for making the right decision for the health and well being of our people, animals and the environment. May their common sense be highly contagious!

While this is good news, I

While this is good news, I can’t help but wonder whose ego was so large that they thought they owned this and sold it to Shell in the first place?

I commend Shell but, like you, wondered how they came to own this area in the first place. How did that happen?

Shell's decision is both wise

Shell's decision is both wise and timely. (And perhaps a subtle signal that the market for oil/gas is collapsing?) Now, at last, Canada has the opportunity to TRULY protect a marine environment - one under such massive threat from dilbit shipping, overfishing and pollution. This swath of coastal waters may now become the resource rich environment it was before European intrusion and exploitation. It could form the impetus to restore the salmon streams and the food chain so essential to all the marine life there - but ONLY if Canada can halt the excessive tanker traffic the completed KM pipeline is planned to create.
PS the article mentions only 3.2 million - how much wealth do you think we have siphoned from these waters over the past 2-3 centuries? Canada has wasted "billions" on much worse. At some point you have to pay the piper.

A step in the right direction

A step in the right direction but so much more left to address. Thank you Shell for leading by example.

I imagine it would be an

I imagine it would be an interesting story to hear about how Shell got all these exploration rights originally, and which government gave them to Shell in the first place, not to mention the rest of the outstanding coastal exploration rights still outstanding. The cavalier way in which our own Governments give away our country's inherent national capital is staggering; current example, Trans Mountain. Having stolen the baby's candy, the thief expects kudos for tossing it back. Sounding cranky? You bet!

In a CBC report: "Shell

In a CBC report: "Shell Canada's rights covered an area more than one-and-a-half times the size of Vancouver Island, which is hard to value, said president Michael Crothers at a news conference on Thursday.

"I hope we get some goodwill [in return]," he said."
What do you suppose they want (goodwill) and who do they think they are that they can presume that they deserve something for returning what is rightfully not theirs?