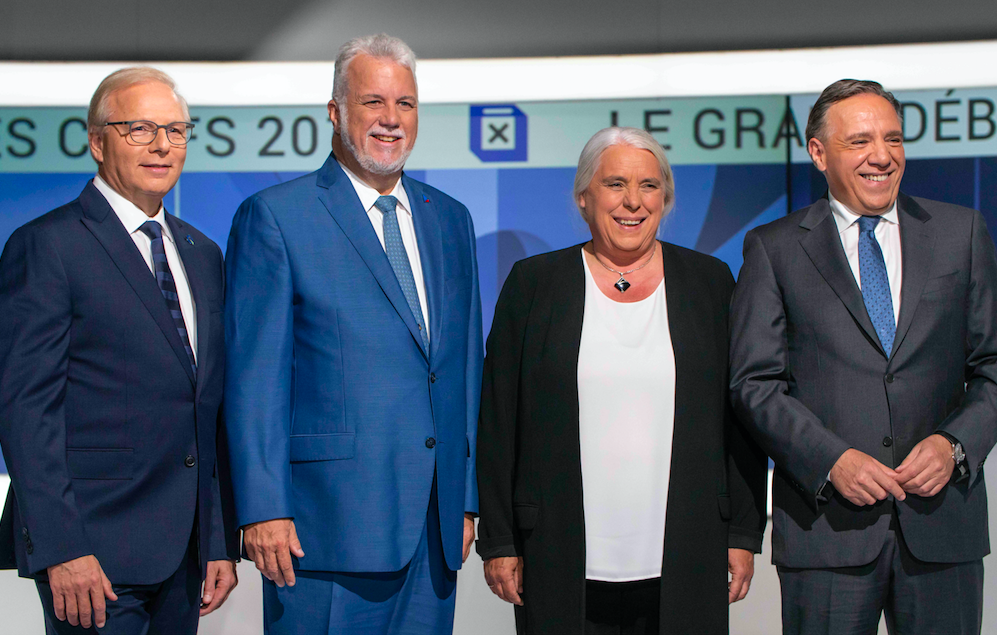 The calm before the storm. Quebec's political leaders, Jean-François Lisée, Philippe Couillard, Manon Massé, and François Legault were all smiles before engaging in the first of three debates in Montreal on Sept. 13, 2018. Photo by Josie Desmarais
Previous story
Next story

Couillard's comments were in response to a pointed attack from Legault about comments made by Quebec Liberal candidate Mohammed Barhone, who is running in the suburban riding of Taillon, on the south shore of Montreal. Legault pressed Couillard to apologize for Barhone accusing the CAQ of being a racist party after the Liberal candidate had suggested that Legault was trying to conduct a "cleaning" of immigrants.

But instead of apologizing, Couillard, the leader of the Quebec Liberals, fired back at Legault.

"You know why people react like, this Mr. Legault? Because you scare them," Couillard said, "the families, the men, the women, the children that are listening — you scare them,"

The testy exchange was among the highlights of the evening in what is the first of three debates scheduled before Quebec residents go to the polls in a general election on Oct. 1.

Each of Quebec's four largest parties was represented, with Couillard and Legault sharing the stage with Parti Québécois Leader Jean-François Lisée and Québec solidaire spokesperson Manon Massé. The event was moderated by Radio-Canada journalist Patrice Roy as the candidates discussed issues such as healthcare, education, the economy, the environment, identity and immigration.

Legault has been outspoken in recent months about wanting to ensure that new arrivals to the province pass a values and French test after three years in Quebec. He responded to Couillard by saying that people were “tired of [the premier's] lessons in morality,” noting that we are “not talking about deporting citizens,” but individuals who had not yet attained citizenship.

The centre-right CAQ has been ahead in the polls all year, although their lead remains fragile. According to the last analysis of polling website qc125.com prior to the debate, just over 33 per cent of Quebecers would cast their the CAQ, while 30.6 would usher in another Liberal government. The Parti Québécois have 19.8 per cent of Quebecer’s support, and the left-leaning Québec solidaire trail behind with 11.9 per cent.

That said, much may change after Thursday’s war of words; a Léger poll published Tuesday demonstrated that 44 per cent of voters said the debates could sway their vote depending on what they heard in the debate.

An angry Legault said he would “never forgive” Couillard for cutting education services to special-needs children, and he was joined by Massé and Lisée in blasting the Liberal party's legacy on healthcare services. Lisée called the exhaustion of health professionals and mistreatment of elderly people in long-term care “Quebec’s shame.”

A VoteCompass survey published at the start of the campaign showed that healthcare is the key election issue for most Quebecers. Couillard has also taken the unusual step of saying that his current health minister, Gaétan Barrette, would be replaced if his Liberals are re-elected.

Couillard was quick to point out that when Legault was education minister under a former PQ government, that he had advocated cutting education — an allegation that Legault categorically denied.

While both Massé and Lisée said that they would increase Quebec’s minimum wage to $15 an hour, Legault said that he would instead change the mandate of a provincial economic development agency, Investissement Québec, so that it would be required to attract more businesses that could create jobs paying between $30,000 to $40,000 per year. He noted that the average salary in Ontario is $5000 more than Quebec.

The leaders occasionally made references to Ontario throughout the evening, in particular when it came to health professionals’ salaries, prompting Lisée to comment that Premier “Doug Ford should not set the salary of doctors in Quebec.”

Legault responded, “we live in a capitalist system” and that his Péquiste counterpart lived on “another planet.”

Breaking from 'Canada, the petrol state'

The candidates also appeared to be divided on energy policies, with Legault reiterating his skepticism about the controversial Apuiat wind project in northeastern Quebec. Massé said that her party was the only one to put environment at the forefront of their platform.

Massé, who spoke less than her male adversaries, said sovereignty was a matter of breaking from “Canada, the petrol state.”

She noted to reporters in a scrum after the debate that listening is a quality in a good leader that is just as important as speaking.

As his five minute media scrum was cut short, Couillard joked that “they are expelling us — and we haven’t even taken a test yet.”

Legault and Couillard have both appeared in political debates before but tonight was a first for Massé and Lisée.