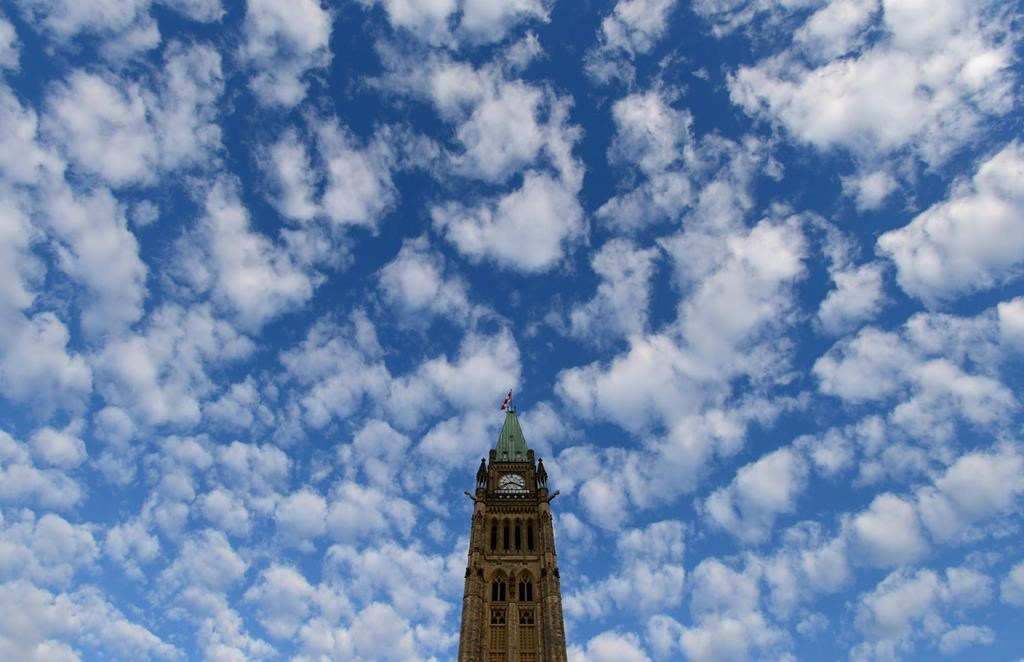 The Peace Tower is seen on Parliament Hill in Ottawa on November 5, 2013. File photo by The Canadian Press/Sean Kilpatrick
Previous story
Next story

Federal Opposition parties are preparing their ammunition for a fall session of Parliament aimed at attacking the Trudeau government's record on pipelines, trade and promises to raise fortunes of the middle class as the opening act in the year-long countdown to the 2019 election.

MPs and Senators will take their seats for the last house session in at least a decade in the Centre Block of Parliament when the house reopens for the fall sitting on Monday, thanks to an estimated 10-year renovation planned for the historic building.

Government House Leader Bardish Chagger says government is focused on getting key pieces of legislation passed before heading to the polls. The Liberals are particularly keen to move quickly on bill C-79 — a bill to implement the Comprehensive and Progressive Agreement for Trans Pacific Partnership (CPTPP).

Finalizing this trade deal with the Pacific Rim is necessary to help open new markets for Canadian exports, Chagger said. This has become particularly important in light of ongoing tense negotiations on NAFTA in Washington.

"We need to diversify our economy and our markets. We need to open up these markets so that businesses can grow," she said of the CPTPP bill, adding that she would "like to see it move as quickly as possible."

Opposition parties, meanwhile are planning to use the fall session as the unofficial launch of the October 2019 election campaign, with plans to highlight political and policy files they believe will erode support for the governing Liberals.

A number of hot button political issues that simmered over the summer months will be marched out by Opposition MPs hoping to capitalize on renewed attention from voters who may have unplugged from politics while at the beach or the cottage.

The controversial purchase of the $4.5 billion Trans Mountain pipeline, the inability to reach an agreement with the U.S. and Mexico on a new North American Free Trade Agreement (NAFTA) and concerns about border security are among the top issues Conservatives plan to highlight as part of a new message campaign they will launch Monday called "Justin Trudeau's summer of failure."

An internal caucus communications plan states the focus of this campaign will be to paint the prime minister as "incompetent" by not taking advantage of the summer to make more positive progress on a number of important files.

"The Trans Mountain Pipeline is stuck in limbo, the crisis at the border continues to cause delays and cost millions, his carbon tax coalition is in shambles and his ministers can't stop breaking ethics laws. We will be focused on reminding Canadians that Justin Trudeau has failed on the big issues and making sure he is held accountable for it."

NDP MP Alexandre Boulerice says his party plans to focus on three main areas — the Trans Mountain pipeline purchase and how this squares with Liberal plans to tackle climate change, tax fairness and why rich corporations continue to take advantage of tax loopholes and the growing difficulty many Canadians face in paying for basic needs.

The idea is to use these issues as a framework to show that the NDP is focused on issues that matter not only in the political realm, but those that affect people's daily lives.

"There's going to be a buildup ... all the parties will want to identify themselves with issues that are at the heart of the concerns of people in real life in Quebec and the rest of Canada," said Boulerice, who serves as the NDP's Quebec lieutenant.

"This is a game of who we are and how we will do things differently than a Liberal or a Conservative government, so it's a buildup for the next federal election in 12 months."

The Trudeau Liberals have 11 bills left on the order paper from previous sittings, including a massive bill to overhaul federal election laws as well as firearms legislation to widen the scope of background checks for gun purchasers.

Government has indicated it will call the CPTPP bill as its first order of business for the opening day of Parliament, signalling the importance of this bill amid ongoing uncertainty over the future of NAFTA.

Liberal strategist Greg MacEachern says the government wants to show it has tried everything in its power to make NAFTA work, but will be looking for a win on another important trade file.

"They realize that they need to have something besides North American trade as a strength, and post-Brexit we will probably start to see negotiations start with the U.K. about a trade arrangement between Canada and the U.K.," he said.

"I think the prime minister wants to be able to say, going into the next election, that he's a business-minded prime minister that tried to create jobs for Canadians, which will dovetail back into their message that we've heard so many times around the middle class."

No special treatment for U.S. if it wants to rejoin TPP: official