Defecting MP not a sign of wider unrest in Liberal ranks, politicians say 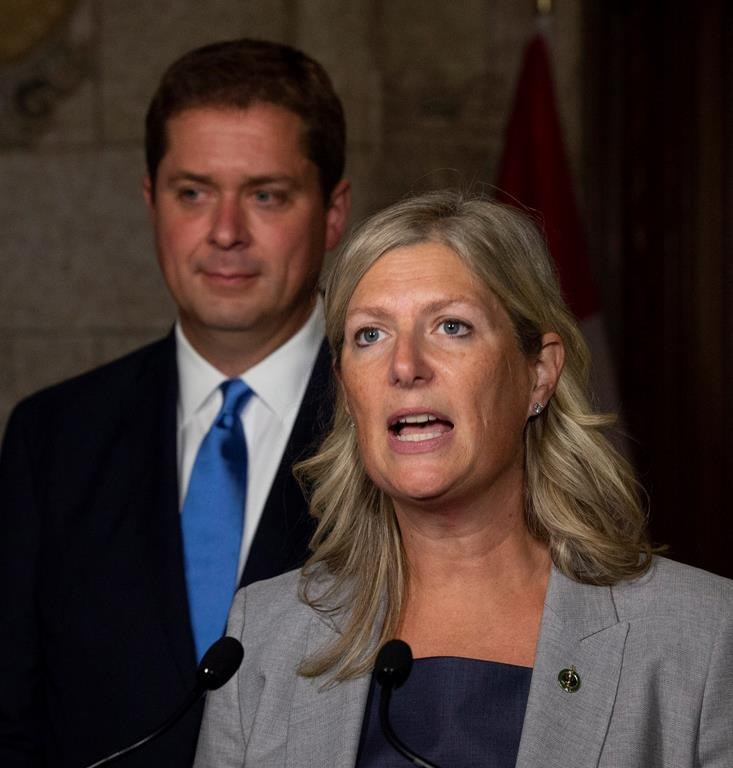 Andrew Scheer looks on as Leona Alleslev, who crossed the floor from the Liberal party to the Tories before Question Period speaks with the media on Parliament Hill in Ottawa on Sept. 17, 2018. Photo by The Canadian Press
Previous story
Next story

Liberal MPs put on a show of unity following the defection of a Toronto-area MP to the Tories, saying Leona Alleslev's decision is not a sign of wider unrest in Prime Minister Justin Trudeau's caucus.

Trudeau and his cabinet ministers have learned the consequences of not listening to backbench MPs, particularly last year when a large number vented frustrations from constituents about proposed changes to small business taxes.

Alleslev claimed Monday that her concerns about the Liberal government's handling of crucial files were "met with silence" and insisted she had to leave the party to openly criticize its direction.

That may have once been the case, one outspoken Liberal backbencher said Tuesday, but the governing party has come a long way in the past year since the small business tax debacle to ensure backbenchers voices are heard.

Wayne Long said overall he finds interactions with cabinet to be "very good," even though new MPs, like himself, at times experience some angst about how to best have their messages heard by Trudeau and officials in his office.

While Long believes communication lines are clear, he said Liberal MPs should be able to vote freely and backbench MPs should be allowed more "flexibility" in how they vote.

"I absolutely understand the team concept, team environment, but teams don't work well if members of the team don't feel they can express themselves openly, so I think there's a way forward."

Alleslev seemed to back up her former colleagues on Tuesday, suggesting her choice may not reflect greater turbulence within the Liberal ranks. Alleslev said in an interview that she isn't aware of other members of her former party who are ready to cut bait.

Her decision, she said, was entirely personal.

Alleslev stunned her former colleagues, riding association and volunteers on Monday — the first day back for MPs after a summer break — by saying she could no longer stay in the Liberal benches. Part of her reasoning was her perception that she couldn't criticize the government as a Liberal.

Heritage Minister Pablo Rodriguez said Alleslev "never" came to his door to relay complaints when he was Liberal whip.

Her claims left some former Liberal colleagues flabbergasted that she had to leave the party in order to criticize it.

Liberal MP Nathaniel Erskine-Smith, who has not always toed the party line, said he has disagreed with his party on more than one occasion in public since being elected in 2015, and more than most of his colleagues.

"There is no 'dishonour' in debating one’s disagreement in public," Erskine-Smith wrote in a tweet late Monday night.

Dozens of volunteers canvassed this spring for Alleslev to ensure she could fly under the Liberal banner again in 2019, and she welcomed the prime minister to her Toronto-area riding in late July, tweeting her enthusiasm at the time to be part of "Team Trudeau."

Her defection blindsided local organizers, including Clayton Haluza, president of the Aurora-Oak Ridges-Richmond Hill Liberal riding association, who spent a good five minutes on Monday staring at the wall thinking, "what the heck has just happened?" when he read an alert on his phone about Alleslev's announcement.

"The reaction I've gotten from our membership base has been just one of hurt, anger, (and) displeasure," he said. "And from the community it's 'I voted for a Liberal.'"

Alleslev called the Liberal riding team an "honourable and committed" group of volunteers, but added she hopes they were working for her because "they truly believed I was the best person to represent them in Ottawa."

"I am the same person today as I was then," she said. "I have the same values."

Democratic Institutions Minister Karina Gould said Alleslev, like other MPs, has the right to change her opinion, and that citizens will have their say on any political switches during next year's federal election.

Haluza said his riding association is now focused on finding a replacement candidate to challenge Alleslev, who bested a Conservative incumbent by just over 1,000 votes in 2015 to send her to the House of Commons for as a first time MP.

"A year from now the voters get the decision of whether they want her to still represent the riding," Haluza said. "I know that my team and I will be out there knocking on doors, convincing them that our party is still the right decision."

Watch out for RMC 'ring