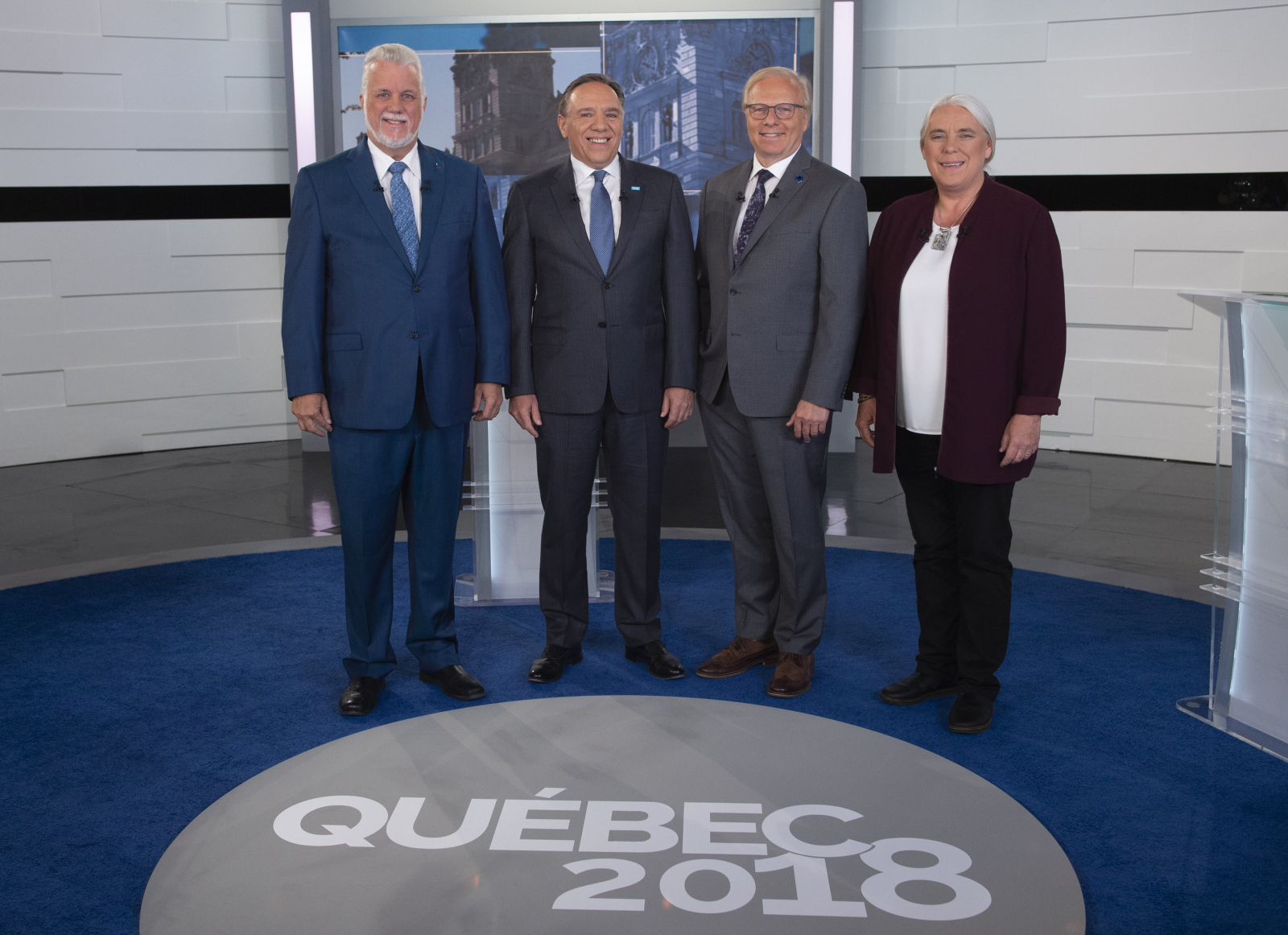 Leaders of Quebec’s four main political parties squared off for the final televised leadership debate on Thursday, less than two weeks before voters go to the polls.

The debate, hosted by TVA Nouvelles, followed a different format from its predecessors. Quebec solidaire co-spokeswoman Manon Massé, Liberal Leader Philippe Couillard, the Coalition Avenir Quebec’s François Legault and the Parti Québécois’ Jean-François Lisée paired up throughout the evening to challenge each other one-on-one, before the floor opened for all participants.

Legault, under attack in recent weeks for his controversial position on immigration, espoused a more tempered tone on the topic than in the previous two debates, saying that his policy is “not a question of expulsion – the only people I want to expel is the Liberals."

The CAQ has seen its long-held lead in the polls disappear this week and is now trailing the Liberals by less than half a point, according to the latest numbers from poll analysis website qc125.com. Both parties are currently leveraging between 30 and 31 per cent of Quebecers’ support, while the sovereigntist parties trail behind. The Parti Québécois has 21.7 per cent and Quebec solidaire has 13.6 per cent. 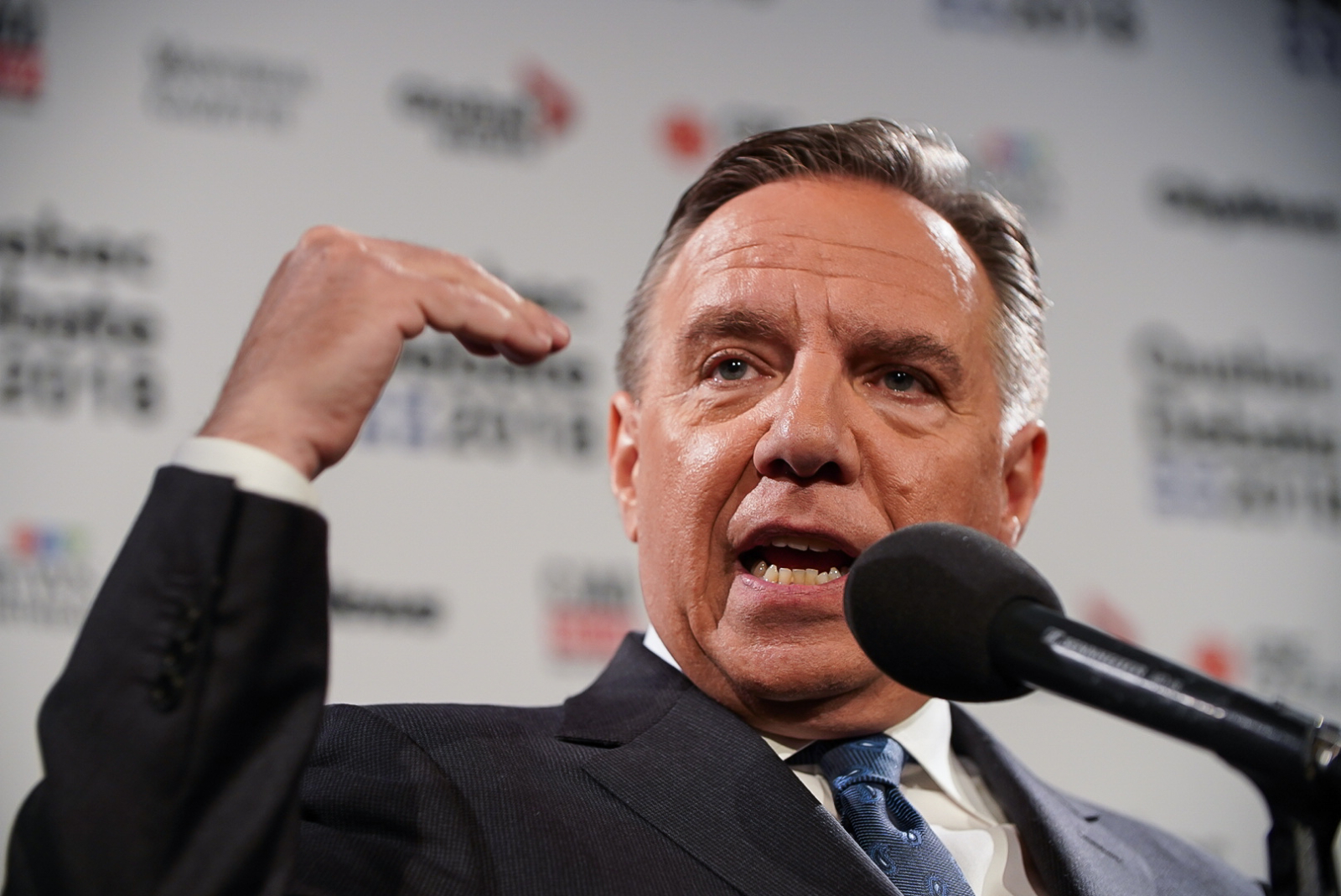 'I'm not perfect, I make mistakes'

Regardless of his softened approach, Legault did not escape scrutiny: incumbent Couillard brought up Legault's comments the first debate about “not wanting to expel citizens, but expel people.”

Legault offered a mea culpa, saying “It happens, I’m not perfect, I make mistakes when I answer certain questions on immigration." Pressed by reporters after the debate for details on what he was apologizing for, he said was sorry for “not talking enough about the importance of integration. I want to integrate all new arrivals, I want to welcome them.”

Legault’s party has pledged to reduce the number of immigrants accepted into Quebec from 50,000 to 40,000 per year, and require that new arrivals pass French and values tests within three years or face deportation. Legault did not clarify whether his softened language meant that the party's position on immigration had changed.

Quebec solidaire's Massé speculated that those controversial immigration policies were not coming from him, but that his advisors were pushing him in that direction to win last-minute votes. “I believe you when you say you have nothing against immigrants,” she said.

Massé and Legault’s opposing financial strategies clashed in a discussion on economy, when Legault spoke about “letting the market play out” and the importance of "economic premier and economic team who will attract more investment businesses into Quebec." His left-leaning adversary said, “it starts with people at the bottom of the ladder” and again, outlined her party’s pledge to raise the province’s minimum wage to $15. 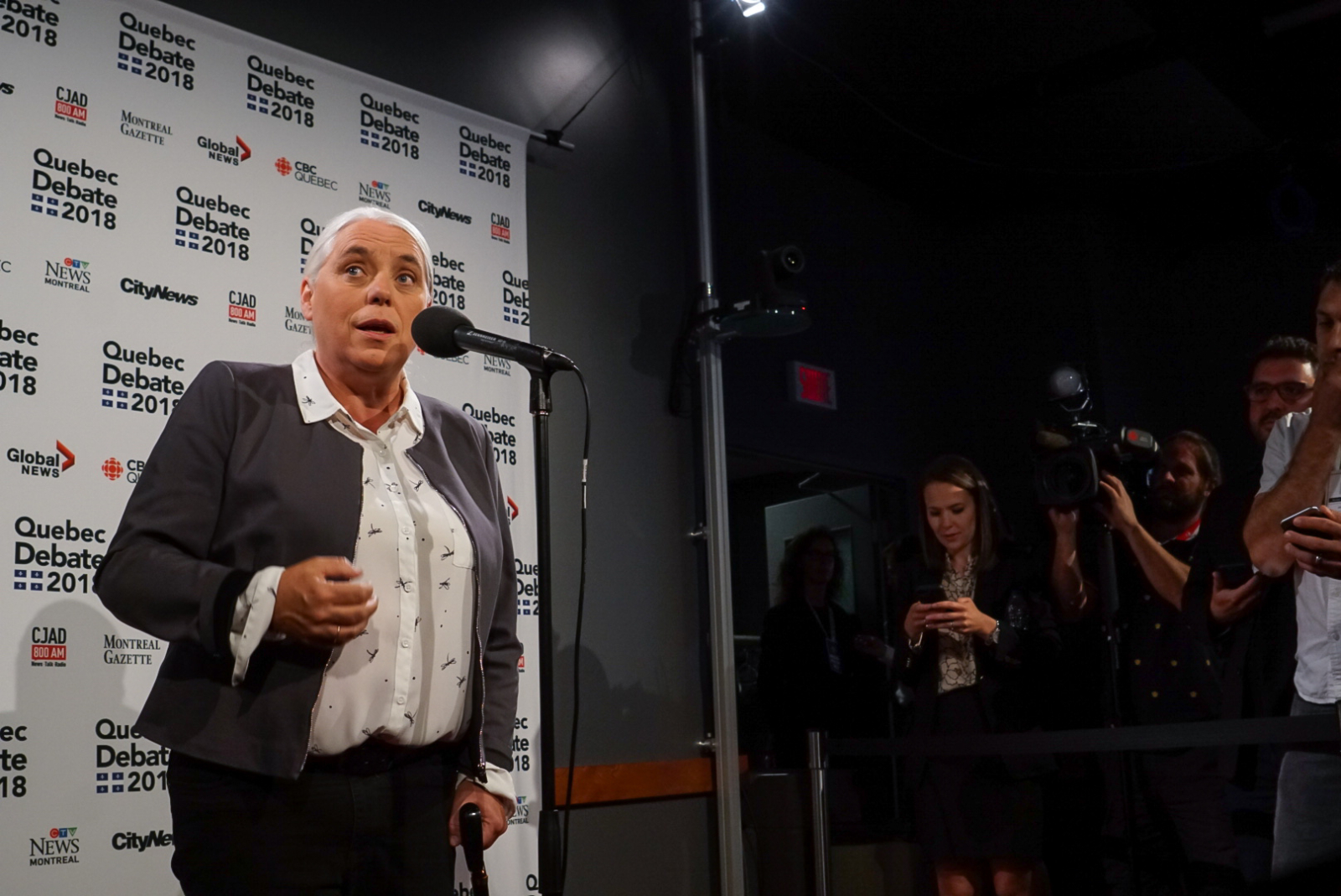 Religious symbols thrown into the fray

In a testy exchange, Legault asked Couillard why he would allow people in authority to wear religious symbols, like the hijab, when polls show that the majority of Quebecers do not support the idea.

“We don’t govern via poll,” Couillard responded, adding that a society had to “protect its minorities.” He also pointed out that hardly any police officers wear hijabs, anyway.

Not for the first time, Legault accused Couillard of "giving lessons," or moralising.

In a bizarre line of questioning, Liśee asked Massé to explain who the leader of Quebec solidiare is, given that the party is fronted by two co-spokespeople.

Wildly veering off topic, he prefaced his question by saying that “lots people told me not to ask difficult questions to Manon Massé."

"I say, my mother is a feminist, and she always asked that everyone should be treated equally,” he said.

Massé responded that her party "learned how to share power,” and later reiterated to reporters that the left-leaning party does not have a leader, just two spokespeople.

Thursday’s format benefitted Massé, who managed to speak for a more equitable portion of the debate than in the two previous debates, both held within the last week.

If the latest polls are reflected on Oct. 1, Quebecers may find themselves with a minority government in the fall. Outspoken Lisée has said on the campaign trail that he would not entertain a coalition with the CAQ.