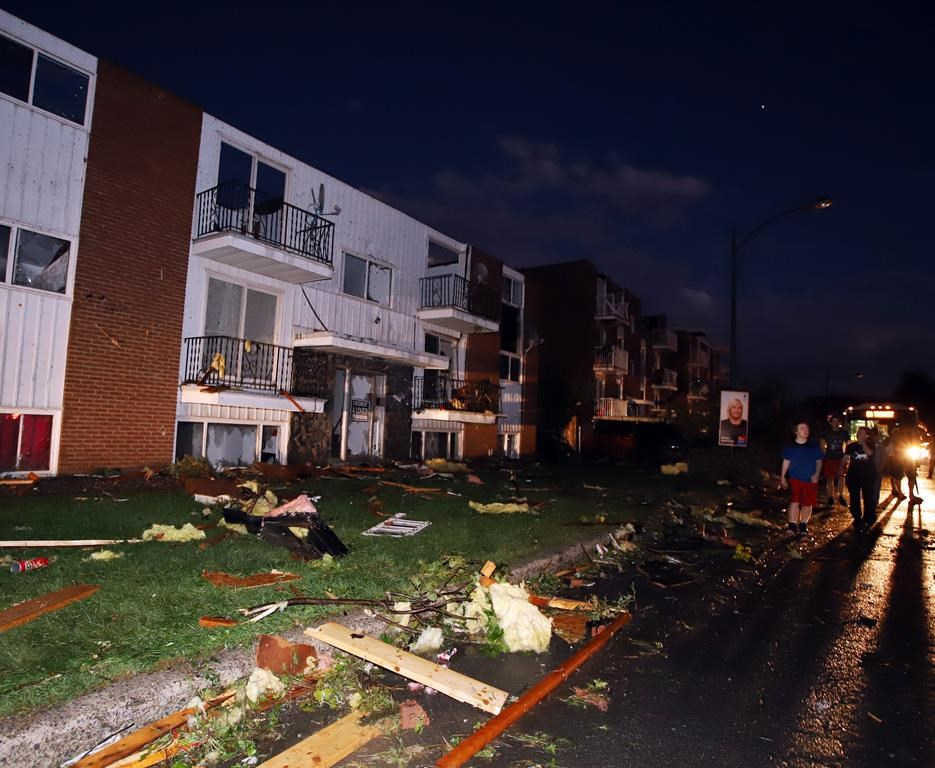 Damaged apartment buildings are shown after a tornado caused extensive damage to a Gatineau, Quebec neighbourhood forcing hundreds of families to evacuate their homes on Sept. 21, 2018. File photo by The Canadian Press/Fred Chartrand
Previous story
Next story

Quebec's political party leaders set their political differences aside on Saturday as they headed to Gatineau, Que., to survey the damage from a tornado that ripped through homes and sent several people to hospital on Friday night.

Couillard and Lisee could been seen walking side-by-side as they toured a neighbourhood in Gatineau alongside Mayor Maxime Pedneaud-Jobin and a number of other officials.

The two leaders passed by ripped-off roofs, chunks of insulation and flattened cars as they surveyed one of the worst-hit streets in the Mont-Blanc neighbourhood, before meeting with tornado victims at a local school.

"It's like life just stopped," Couillard said as he looked at a roofless house, with furniture still visible intact in the living room.

"It's a miracle people got out of there alive."

Couillard, the current premier, announced $1 million in emergency aid would be handed over to the Red Cross to help victims who couldn't return to their homes.

"What we announced this morning is for Gatineau but also for the rural areas around the city," he said.

"It's to help people, through the Red Cross, to meet their daily needs for several weeks and even more, if needed."

Lisee, for his part, said he was relieved nobody had been killed.

"As the premier said, it's extraordinary that there was no loss of life," he said. "We're fortunate in our misfortune, but we have to support these people, who come from modest means and have lost everything."

Legault said Saturday morning that he was keeping a scheduled meeting with a group of mayors north of Montreal but had cancelled an afternoon appearance to head to Gatineau.

Speaking north of Montreal in Ste-Anne-des-Plaines, he said it wasn't a day to play politics.

"I think it's important that all the parties show their solidarity, support the premier and reassure the population, because there are people who have lost a lot materially and will need to be reimbursed if they're not insured," he said.

Legault said the Quebec government would be there to help the victims, no matter who was elected, and encouraged people to donate to help recovery efforts.

Legault and Masse also set partisan politics aside as they jointly met with tornado victims and spoke with Gatineau's mayor.

"In Quebec, we help each other, we hold each other up and take care of each other; it's what we've always done," Masse wrote on Twitter earlier in the day.

For the most part, the leaders ditched the official trappings of their campaigns as they expressed solidarity for the victims.

Couillard announced Friday night that he would suspend his campaign and leave his electoral bus behind in order to visit storm-damaged areas in his role as premier.

Legault also said he would travel to Gatineau in a private vehicle, while Lisee said he was acting as head of Quebec's official Opposition for the day.

Both Lisee and Couillard were expected to head back to Montreal at the end of the day in order to restart their campaigns.

-- With files from Melanie Marquis, Stephanie Marin and Mylene Crete in Gatineau, Que.

A distinctly Quebec affair: The province's election is like nowhere else in Canada