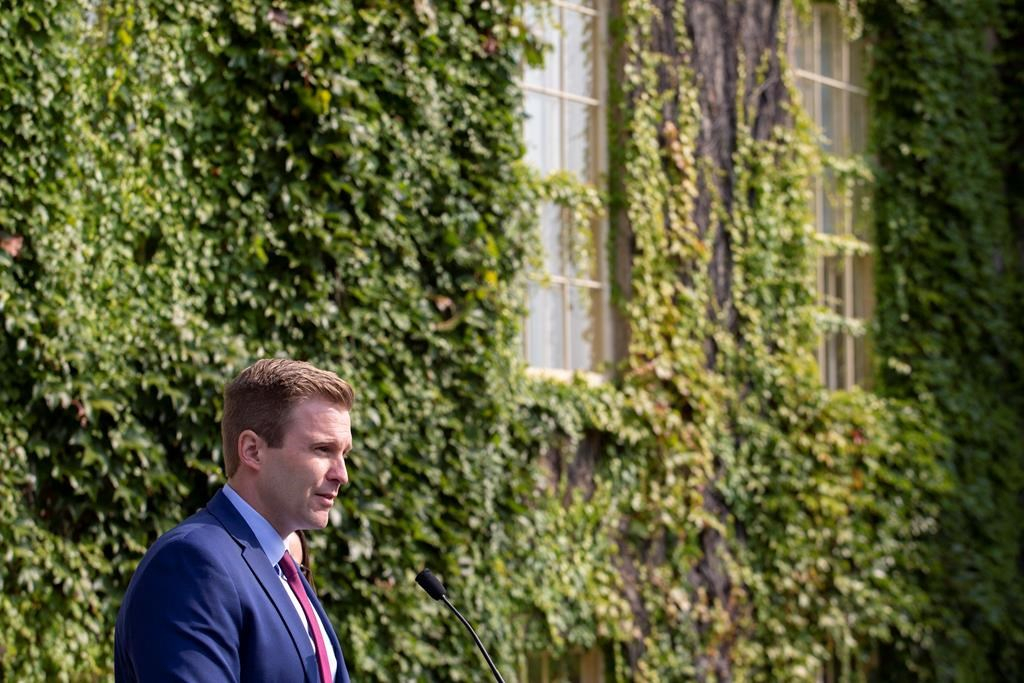 Brian Gallant says the lieutenant-governor has given him permission to continue on as New Brunswick's premier for the time being, signalling the province's high-stakes political drama won't be over any time soon.

Gallant met Tuesday with Lt.-Gov. Jocelyne Roy-Vienneau to discuss Monday night's election, which left his Liberals in second place with 21 seats to the Tories' 22 seats, and two smaller parties winning three seats each.

She gave him the go-ahead to stay on as premier and attempt to seek the confidence of the house, he said, and he is promising to convene the legislature "before Christmas."

Tory Leader Blaine Higgs, who will meet with Roy-Vienneau Thursday morning, said her office has given him a different impression.

"That isn't the message that we've received from the lieutenant governor's office," said Higgs.

Asked about what was said during Roy-Vienneau's meeting with Gallant, a spokesman for the lieutenant-governor said she "inquired as to whether he believes he has the confidence of the House."

"He indicated he thinks so, however more discussions are necessary. Her Honour awaits his final decision," said Tim Richardson, her principal secretary.

Gallant told reporters he will call the legislature back "sooner than later."

"I made this clear to the lieutenant-governor — if I face the legislature and I do not maintain the confidence of the house there will be a new government governing this province ... whether there's some type of other arrangement or whether it would mean that we would have to go into another general election," he said.

Gallant likened the situation to Stephen Harper's former federal government — the Conservatives managed to govern several years in a minority government without a formal coalition.

Gallant made it clear, though, he might seek some kind of arrangement with another party.

"If there's a formal agreement between us and somebody else, and that demonstrates that we would be in a position to maintain the confidence of the house, we would still have to call the house at one point to ensure that confidence would be practically possible and we would be able to govern."

Robin Mockler a spokeswoman for the People's Alliance, said Tuesday morning there had been no talks to date between Higgs and Alliance Leader Kris Austin.

Recounts expected in a number of ridings

Gallant said he "humbly" accepts that the results suggest New Brunswickers want change, but said they are asking the parties to figure out how to govern together.

A number of ridings were decided by slim margins, and recounts are expected, but Gallant said he didn't expect the results would change. He said those recounts would have to be held, and MLAs sworn in, before he would be able to call the house into session.

Gallant said in order to work with other parties, he might not be able to act on some of the Liberal campaign promises.

Higgs, who said he considers himself a premier-elect, said voters have given the Tories a mandate.

"I'd like to just get on with it. I think all this is doing is prolonging it," Higgs said.

Observers say backroom deals brokered over the coming hours and days could determine whether a tenable coalition is formed with one of the smaller parties — or New Brunswickers go back to the polls before Christmas.

The province has had virtually no experience with minority governments. The last time a third party held the balance of power in the legislature was October 1920 when two farmers’ parties managed to win 11 seats between them.

Donald Wright, a political science professor at the University of New Brunswick, says the lieutenant-governor will likely first invite the incumbent, Gallant, to find the confidence of the house.

He says the Liberal leader is likely to approach the Green Party — which won three seats, including that of leader David Coon — as they are more "ideologically compatible."

Wright says if Gallant cannot find the confidence of the house, Higgs will be given a chance — presumably through a deal with the right-of-centre People's Alliance, which also won three seats.

Both Gallant and Higgs indicated in their speeches late Monday that they would seek to govern.

"New Brunswickers ... want us to work collaboratively as political parties to get things done," Gallant said.

"We will be open to do what we can to listen to other political parties and do the best we can on a vote by vote basis."

Higgs, meantime, claimed his party had won a mandate.

"Perhaps Brian Gallant and I will both be lining up at the lieutenant-governor's in the morning," Higgs said.

Wright said if neither main party can gain confidence of the house, the legislature will be dissolved and another election will be held.

Political scientist Mario Levesque said one issue with such a close election is that the party or coalition in power will have to elect a Speaker.

"The challenge here is even if they do form a pact — the Alliance goes with the Conservatives or the Greens with the Liberals — there is not enough there to elect the Speaker," said Levesque, a professor at Mount Allison University in Sackville, N.B.

"If the Alliance goes with the Conservatives, that's 25, so a majority," he said. "But then you have to take one away for the Speaker, and that gives them 24 which means they're still vulnerable to a tie vote in the legislature."

Erin Crandall, a professor in the politics department at Acadia University in Wolfville, N.S., called the emergence of two third parties "the big story for this election."

"This is uncharted territory for New Brunswick, which is historically a two-party system," said Crandall, who is originally from Moncton. "It's always been a question of who's going to be in a majority government: The PCs or Liberals."

She said a minority government will change the dynamics of governing in New Brunswick, making third parties the "major influencer" in the legislature.

Crandall said Canadian political parties usually agree to co-operate for a certain period time, without formal coalitions as in other countries.

"In Canada, you usually have one party governing and they rely on the goodwill of these smaller parties," she explained. "Nobody wants an election right away so probably they'll make things work."

Updated 415PM ET with Conservative leader's reaction to premier 12:47 PM ET with fresh photograph and 12:10 PM ET with new information on Gallant's decision to stay on as premier.