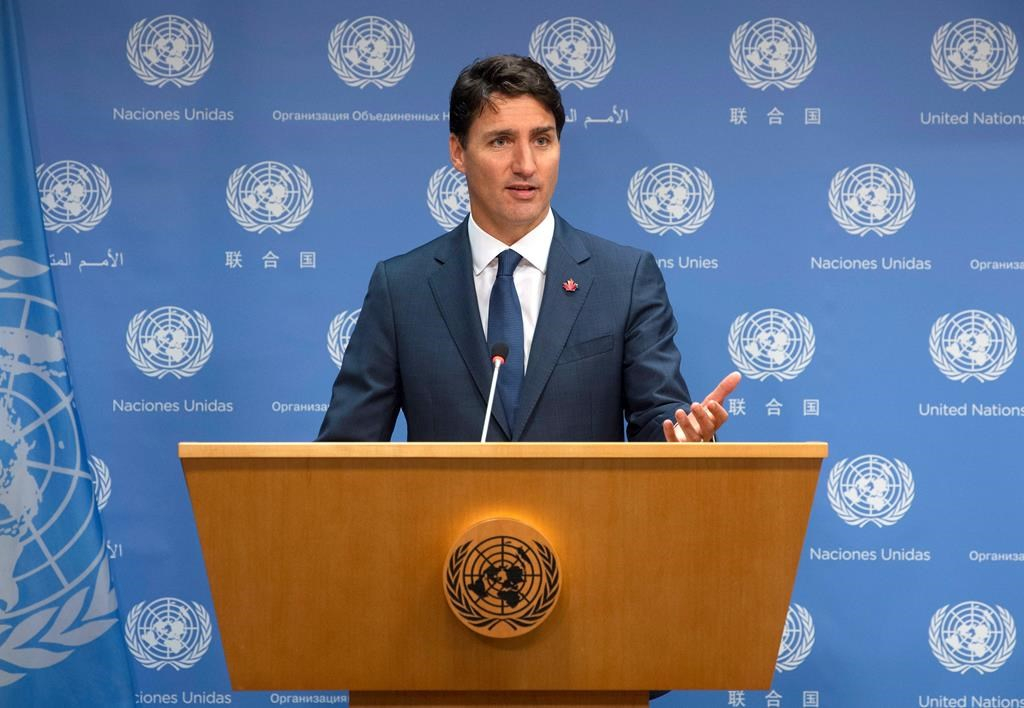 Canada joined a group of South American nations in formally referring the Venezuelan government of Nicolas Maduro to the Hague-based International Criminal Court, a move aimed at placing the socialist regime under investigation for alleged crimes against humanity.

The move — Canada's first referral to the court and the first time member nations have referred a fellow member state — comes as Venezuela spirals ever deeper into a worsening economic and political morass.

Along with Trudeau, the Latin American countries of Peru, Argentina, Chile, Colombia and Paraguay signed the referral on the very day that Maduro himself made a surprise arrival at the UN to deliver a scheduled speech not many expected him to show up for.

"The situation in Venezuela is catastrophic," Trudeau told a news conference at the UN.

"There is a humanitarian crisis going on in a country that used to be one of the most successful and prosperous countries in South America. The failure of leadership in Venezuela is of concern not just to us, but to leaders in the region, friends to Venezuela and of concern to the world."

'Looking for ways to help the Venezuelan people'

The move also provides a shot in the arm to the court, which has come under heavy criticism from the U.S. in recent weeks — in particular from national security adviser John Bolton, upset over an ICC investigation of alleged American war crimes in Afghanistan.

Bolton, famously dismissive of the court during his time as UN ambassador in the administration of George W. Bush, has been pushing for sanctions against the body, which he considers "illegitimate."

"Canada is pleased to use all different paths that we can to help the Venezuelan people; we are pleased to be joining with a broad number of other countries to continue to look for other solutions to this, including using the International Criminal Court," Trudeau said.

"In my conversations with American officials and leaders, the concern that we share — both of us, as countries — on Venezuela is real, and we're always looking for ways to help the Venezuelan people."

"It was Parliament that granted her honorary citizenship, and that's a conversation that we certainly could have." #Trudeau on repealing Aung San Suu Kyi's Canadian citizenship #Rohingya

Trudeau referred repeatedly to the need to take urgent action on crisis in Venezuela while at the UN this week, including in bilateral meetings with the leaders of Chile, Paraguay and Colombia.

But he rekindled a different kind of human rights debate Wednesday when asked whether the once-celebrated Burmese reformer Aung San Suu Kyi should be stripped of her honorary Canadian citizenship for failing to speak out against the atrocities being committed against the Rohingya of Myanmar.

"That's one of the questions that certainly Parliament can reflect on," Trudeau said. "It was Parliament that granted her honorary citizenship, and that's a conversation that we certainly could have."

Need to solve the Rohingya crisis

The extensive report documented the systematic targeting of civilian Rohingya by the military, including mass gang rape, sexual slavery and the razing of hundreds of villages.

The humanitarian crisis in Myanmar will not be fixed whether Canada revokes Suu Kyi's citizenship or allows her to keep it, Trudeau cautioned.

"The hundreds of thousands, indeed millions of people, who are affected by this Rohingya crisis, by this genocide — whether or not Aung San Suu Kyi has Canadian citizenship or not, honorary or not, makes no difference in solving this crisis," he said.

The federal government, he added, is focused on solutions "to put an end" to the ongoing crisis. Ottawa has pledged $300 million over three years to support displaced people and other vulnerable populations.

The US officials responsible

The US officials responsible for meddling in Venezulean affairs to cripple it's economy in an attempt to undermine it's elected governments because they don't meet it's preferred neo-liberal puppet status, are the ones the should be referred to the ICC. For shame Trudeau!