Feds working to iron out kinks in disaster alert system 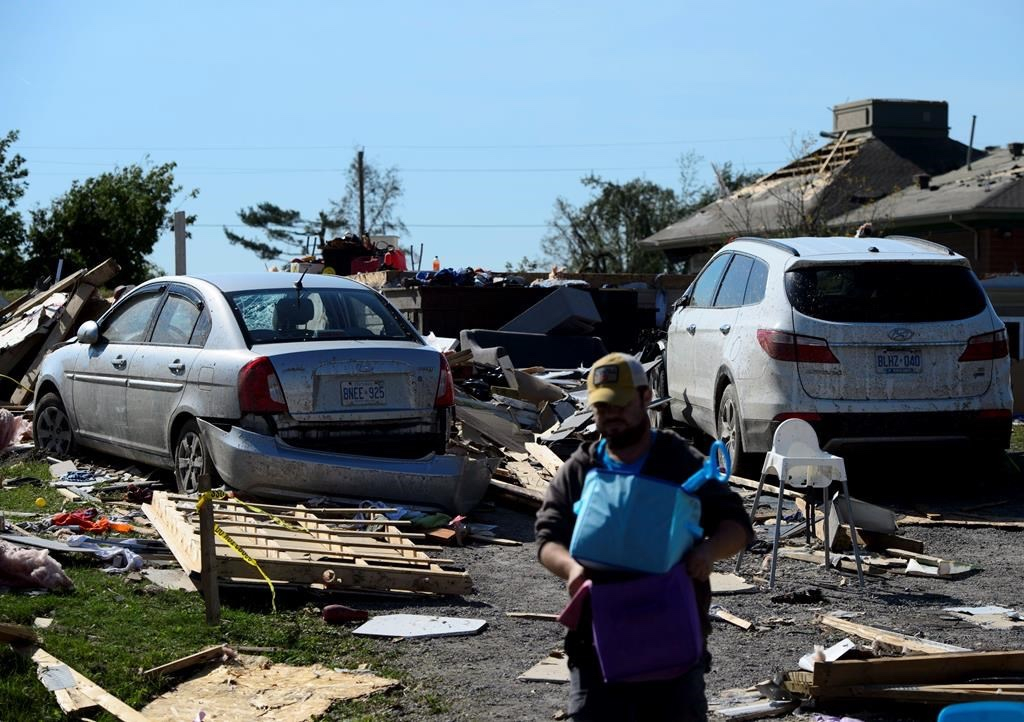 On Sept. 24, 2018, people in the west Ottawa neighbourhood of Dunrobin clean up after a devastating Sept. 21 tornado. Photo by The Canadian Press
Previous story

Officials say there are still several kinks in Canada's system of alerting citizens about natural disasters via mobile devices, even as the alerts are being credited with saving lives in the tornadoes that swept the Ottawa-Gatineau area last week.

Mobile alerts went out across the National Capital Region last Friday as a storm slammed into the region and unleashed what Environment Canada now says were six tornadoes — three each in Ottawa and Gatineau, Que.

About 100 alerts have been issued across the country since April 6, when wireless warnings were added to the traditional television and radio messages broadcast by the National Public Alerting System, said Scott Shortliffe of the Canadian Radio-Television and Telecommunications Commission (CRTC).

Yet while many of those alerts have been successful, Shortliffe said in an interview that issues remain, including that only cellphones and wireless devices connected to an LTE network can receive the messages.

The system uses what is called "cell-broadcast technology," which sends a message to all wireless devices within a certain geographic area with local cell towers, rather than sending messages to individual phones.

"The problem that we face is because the system is so complicated and there's technological change, there are new handsets that enter the market constantly, we see that new problems can crop up," he said.

"Even on a system that's been working perfectly."

Thrilled that lives were saved

It's believed such a problem was behind a three-hour delay in the issuing of an Amber Alert in Saskatchewan last week, while Shortliffe said he has heard from some residents in the National Capital Region who never received a tornado alert on Friday.

"I was thrilled that there were people who gave the system public credit that it saved lives in Dunrobin when the tornado came through," he said. "But I'm also aware that there are people who are saying: 'My phone didn't go off. Why didn't my phone go off?'"

Another issue identified for the Gatineau tornadoes was that some of the messages broadcast in Quebec were in English only, though Shortliffe said responsibility for the language and content of warnings lies with the provincial or municipal government issuing the alert.

While testing is set to continue across the country and the CRTC has directed all cellphones sold in Canada be capable of receiving the alerts by next April, Shortliffe expected there would continue to be some problems, particularly as people hold onto older phones.

In the meantime, officials plan to continue conducting tests to ensure any problems that crop up are identified and addressed as quickly as possible — and before a life-threatening emergency hits, not when it is already bearing down on people.

"The good thing is we're all concentrating on the same outcome, which is find out where the problem is and fix it to make sure it's not repeated next time," Shortliffe said.

There are 988 bodies across Canada that can issue an alert, including federal departments and agencies as well as provincial and municipal authorities, such as police and emergency response centres.

A first round of nationwide tests was conducted in May to mixed results that included technical problems with certain wireless networks in Ontario and a coding error that prevented any messages from being sent in Quebec.

While most of those problems have since been fixed, Shortliffe said one major concern is the entire system hasn't been tested in Quebec. A new round of national tests hasn't been scheduled.

Meantime, Shortliffe said people can check to see whether their phones are compatible with the alert system by going to AlertReady.ca. Anyone who didn't receive a warning even though their phone is compatible should contact their wireless provider.

Environment and Climate Change Canada issued details Thursday of the six tornadoes that ripped through the Ottawa-Gatineau region last week, with one of the six speeding up to winds of 265 kilometres per hour as people in the area saw buildings leveled, roofs torn off, and intense rain.

Hydro Ottawa reported about 170,000 people lost power because of the storm. For some, power wasn't restored until Wednesday. While there were no reported casualties, some homes and businesses were destroyed, vehicles overturned, and trees and hydro poles snapped. Much of the worst damage centred on the Ottawa neighbourhood of Dunrobin and the Quebec city of Gatineau.

Environment and Climate Change Canada said six tornadoes were tracked via damage reports and satellite pictures from about 3:30 p.m. to 6 p.m. on Sept. 21. Evidence points to an initial tornado at about 3:30 p.m. near the Baskatong Reservoir in Quebec, 200 kilometres north of Ottawa. A tornado developed over Calabogie, about 100 kilometres west of Ottawa, at 4:15 p.m.

On the Enhanced Fujita scale, which rates wind damage on a scale from 0-5, those first tornadoes were classified EF-1. The Calabogie tornado, which was tracked west to White Lake, contained wind speeds up to 175 kilometres per hour.

Another tornado began west of Kinburn at about 4:40 p.m. and cut across Dunrobin and Gatineau over 40 minutes. This was an EF-3 tornado with wind speeds of up to 265 kilometres per hour.

An EF-2 tornado with wind speeds of up to 220 kilometres per hour tracked through Arlington Woods to Greenboro in Ottawa at about 6 p.m.

– With files from National Observer

Tens of thousands without power after tornado in Ottawa region