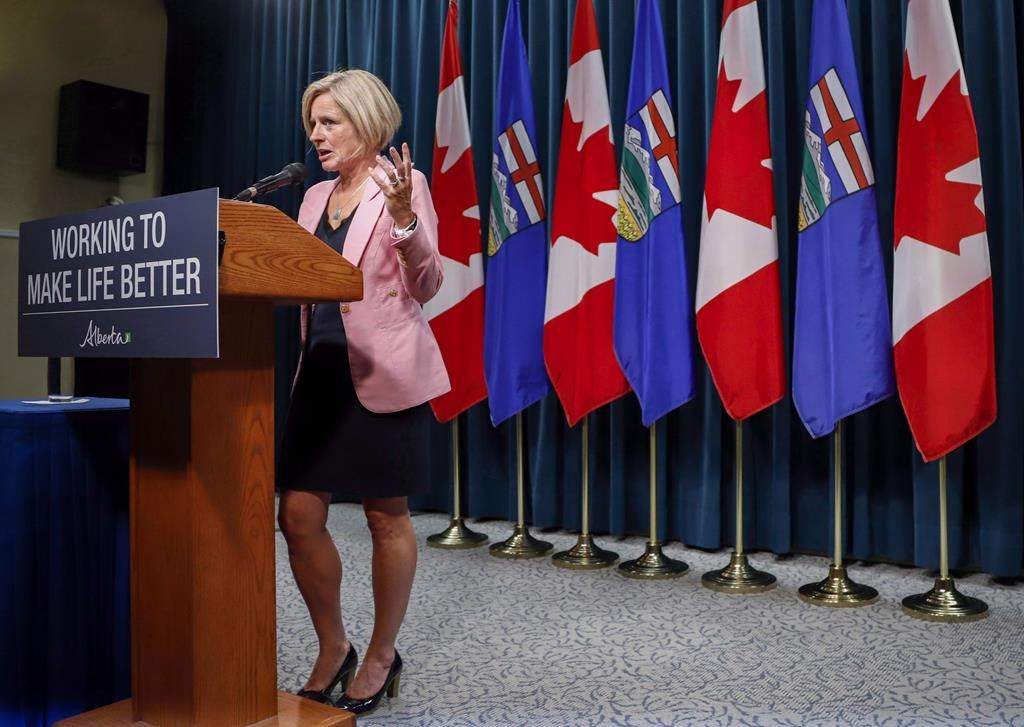 Alberta Premier Rachel Notley is rejecting accusations she dropped the ball by waiting too long to publicly take on the feds over two bills her government believes could seriously harm its oil and gas industry.

"We've been very engaged on it. We've been on it all along," Notley told reporters Wednesday.

"We are focused on a problem-solving approach to addressing this legislation, not a blow-it-all-up and return to a polarized debate that gets nothing done."

Notley made the comments a day after she announced in a speech that her government has major concerns with the federal Bill C-69 and is sending two cabinet ministers to Ottawa to speak at committee hearings to publicly express Alberta's misgivings.

Bill C-69 will overhaul how energy projects are approved. Industry leaders have said the bill would sow investor uncertainty and make it extremely difficult to get projects approved by taking into account broader issues such as the impact of upstream and downstream carbon emissions.

Bill C-69 and Bill C-48 — which would ban tanker traffic on B.C.'s northern coast — have already passed the House of Commons and are now both under deliberation in the Senate.

Alberta Energy Minister Marg McCuaig-Boyd's office, in an email Wednesday, said the minister, Notley and other officials have been working with federal counterparts for a year to express broad and specific concerns with Bill C-69 and build consensus on getting changes.

The letters spell out Alberta's grave concerns with both bills, saying Bill C-69 represents "a historic over-reach of federal jurisdiction" and that the tanker ban jeopardizes expansion of Alberta's economy, "putting thousands of jobs and billions of dollars at risk."

Yet, despite those concerns, Notley and her caucus in that time have not focused public attention on the bills in speeches or at events.

They have also rebuffed opposition United Conservative attempts this spring to rally all-party support to fight Bill C-69 and to fight federal intrusion on up and downstream carbon emissions from energy projects.

On Tuesday, UCP Leader Jason Kenney questioned Notley's motives for staying comparatively silent on both bills until they were are so far along the legislative process in the Senate.

"On a conversion on the road to election day, we've suddenly seen the NDP decide that they're going to apparently oppose Bill C-69," said Kenney.

"The question is why did it take this long. And do they actually believe that Albertans are going to buy yet another bogus effort to stand up for this province when they refused to do so for months, and months, and months."

Notley's public efforts on those two bills stand in contrast to her public relations blitz on the Trans Mountain pipeline, which would take more Alberta oil to the B.C. coast.

"I need you to get on the phone and to get online .... Get the phones ringing in Ottawa. Fill up those in-boxes," Notley told a business crowd in Sherwood Park on April 24.

In her speech Tuesday, Notley gave a tip of the hat to public engagement, saying it made a difference on the Trans Mountain debate, and said that approach will continue.

"We will redouble our efforts to make our case and build support," said Notley.

"We will use every tool available to reach out to Canadians."

Notley has said getting Trans Mountain going is critical to Alberta's economy. The project would triple the capacity of the existing line and allow Alberta to break the pipeline bottleneck that is currently forcing it to sell to a captive U.S. market at a reduced prices.

The line is now in legal limbo as the federal government responds to court directives to study its impact on marine life and to also further consult with affected aboriginal groups.