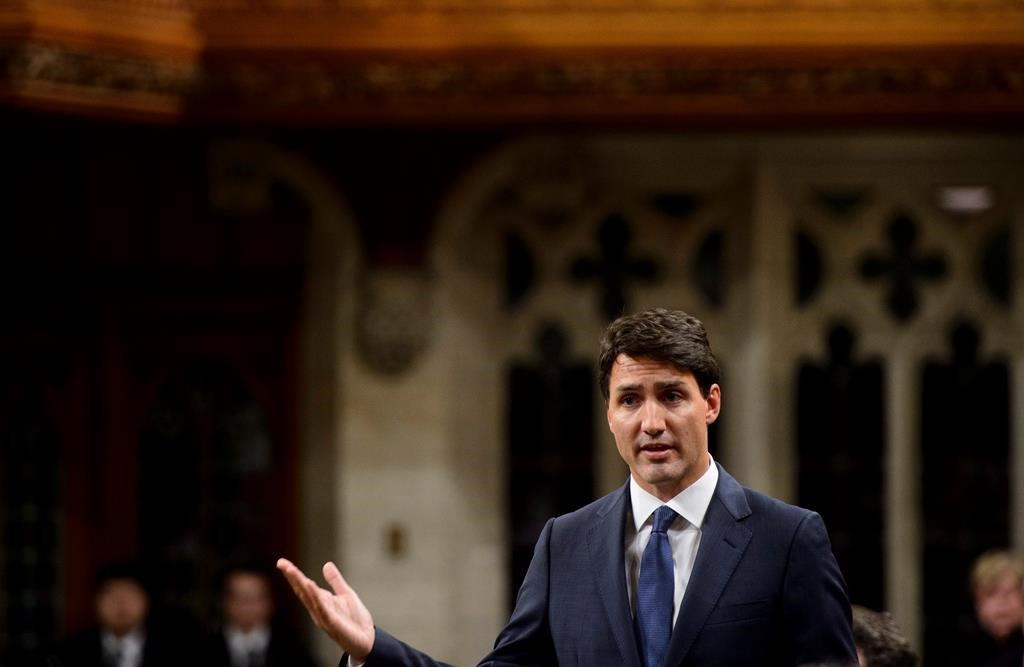 Prime Minister Justin Trudeau stands during question period in the House of Commons on Parliament Hill in Ottawa on Wednesday, Sept. 26, 2018. Photo by The Canadian Press/Sean Kilpatrick
Previous story
Next story

As grisly details of the rape and death of eight-year-old Tori Stafford were being recounted by a Conservative MP during question period Wednesday, some MPs reacted with gasps of revulsion.

But it wasn't the specifics of the crime that upset members of Parliament. Rather it was the fact these details were being shared in the House of Commons that made politicians and others watching the debate recoil.

"I would ask them, please do not continue to increase the level of graphic detail read into the official record here," he said.

"This is not the way this house should be engaging."

It was the latest episode in what has been a week of heightened levels of rhetoric and vitriol that has even devolved into swearing and name-calling among MPs, both in the House of Commons and online.

On Tuesday, New Democrat MP Romeo Saganash was asked to apologize shortly after using the F-word during question period. Saganash used the word as he accused Trudeau of not caring about Indigenous rights when it comes to the Trans Mountain pipeline expansion.

All week, Conservatives have engaged in heated debate over concerns that Veterans Affairs Canada was funding PTSD treatment for Christopher Garnier, who was convicted of killing an off-duty police officer in 2015. The Conservatives have repeatedly cited details of the case, calling the payments "disgraceful."

These debates have spilled into social media, with several MPs regularly engaging in particularly caustic exchanges. In one such Twitter debate this week over the Garnier payment issue, Conservative MP Michelle Rempel called Veterans Affairs Minister Seamus O'Regan a "ridiculous coward" and a "disgrace."

Concerns have been raised about the level of decorum in the House of Commons time and again, but there seems to be no consensus on how to improve things.

Results from a recent survey of MPs, conducted in May and June by the Samara Centre for Democracy, found lawmakers from across the political spectrum were dissatisfied with the tone of debate. But no agreement could be found on possible reforms.

MPs indicated they often don't know what mechanical fixes are available, but as soon as one side or another offers an option, it becomes "infected with partisan politics," said research director Mike Morden.

"In part, I think it happens in the life cycle of a Parliament that you get to a point where frustration is starting to peak, and I think it's often the case in the latter stages of a Parliament," he said.

But he says he has heard several close observers of federal politics who have remarked the events of the last week do not often "get this bad."

For his part, Trudeau has tried to stay above the fray.

On Thursday, the prime minister took a measured and low-key tone to his voice when answering questions about the Stafford case. He also apologized to the speaker for his back bench getting too loud.

He has not been blameless. Trudeau apologized last week for saying the word "damn" during question period as part of his response to a question.

But a senior government official says Trudeau feels it is important to approach tragic cases like the Stafford murder and Garnier case with sensitivity.

"I think there's a line between partisan rhetoric and getting into details that don't necessarily need to be read into hansard," the official said on condition of anonymity.

"The prime minister and even minister (House Leader Bardish) Chagger have said they are focused on raising the level of debate so that it's fact-based, that's it's actually engaging debate on a variety of issues, and I don't' think that's what we saw today or what we've seen in recent months."

From what I've seen Mr.

From what I've seen Mr. Trudeau doesn't like to debate. He begins to unravel....then shuts down the lines of open dialogue by name calling. His definition of fact based isn't necessarily based on facts.