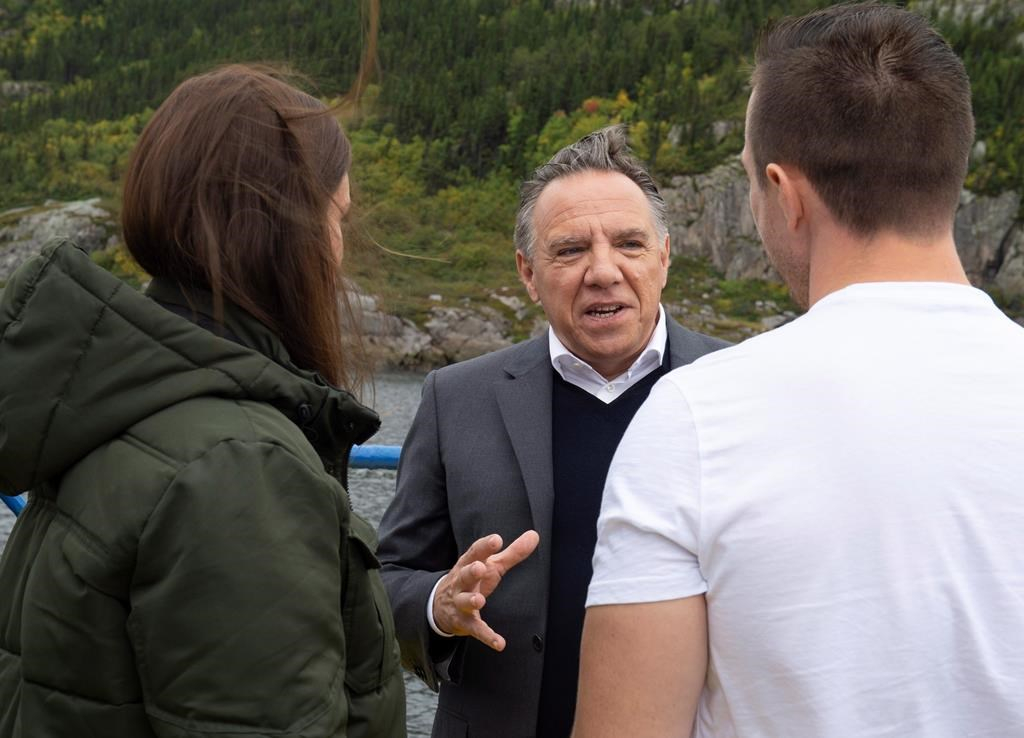 Coalition Avenir Quebec Leader Francois Legault chats with tourists from Montreal while on the ferry crossing the Saguenay river in Tadoussac, Que., on Wednesday, Sept. 26, 2018. Photo by The Canadian Press/Jacques Boissinot
Previous story

Criticism of Prime Minister Justin Trudeau by the wife of Coalition Avenir Quebec Leader Francois Legault raised questions Wednesday about how a possible Coalition government would get along with the federal Liberals.

In a newly emerged recording, Isabelle Brais, Legault's wife, can be heard telling a party meeting last month that while Trudeau's father, former prime minister Pierre Elliott Trudeau, was "brilliant," his son is not.

Brais, a fixture by Legault's side during the election campaign, described the younger Trudeau as incompetent and suggested a Coalition government could have strained ties with his federal government.

Brais issued an apology through the party after audio of the August meeting in Montreal was obtained by Montreal's La Presse, which published details Wednesday. She said she had gone too far.

Campaigning in Tadoussac, Que., Legault declined to say whether he endorses his wife's comments about the prime minister.

"My wife, who I've been with for 28 years, is an independent woman who has her opinions, who is spontaneous, who apologized," Legault told reporters. "I think we should turn the page."

Asked his own opinion of the Trudeaus, he dodged the question. "I'm not able to judge who of the two is most brilliant," Legault said.

Legault said he is not worried the remarks will harm relations with Ottawa if he becomes premier. He would need to be on good terms because his centrepiece policy proposals on immigration rely heavily on federal support.

The Coalition is proposing to reduce immigration by 20 per cent and to oblige newcomers to pass French and values tests within three years of arrival or face removal. Responsibility for the expulsions would fall to the federal government.

"I'm confident that the demands we make to Ottawa — because they are supported by a large percentage of Quebecers — will be accepted regardless of who is (prime minister)," Legault said.

He added that his aide in charge of transition in the event of an Oct. 1 Coalition victory has already had discussions with federal officials. Recent opinion polls have shown the Coalition neck-and-neck with the Liberals in popular support but better positioned to form the next government.

In the recording, obtained by The Canadian Press, Brais weighs in on a wide-range of issues during a question-and-answer session with party supporters.

She said it would be impossible for the Coalition to work with Trudeau on re-opening the Constitution.

"It is not going to be possible with Justin Trudeau," Brais said. "His father was brilliant, but he is not."

She also praised Quebec as a jewel in North America, with a European-style culture distinct from the rest of Canada.

"We are different, we are not coming from Saskatchewan .... Have you been to Saskatchewan? It's almost the United States," Brais said.

Following the event, she was asked to confirm her observations about the prime minister.

"I understand that Madame Brais apologized, and I'm pleased because these comments have no place in politics," he told reporters in Ottawa.

— with files from Patrice Bergeron in Tadoussac, Que.

A distinctly Quebec affair: The province's election is like nowhere else in Canada