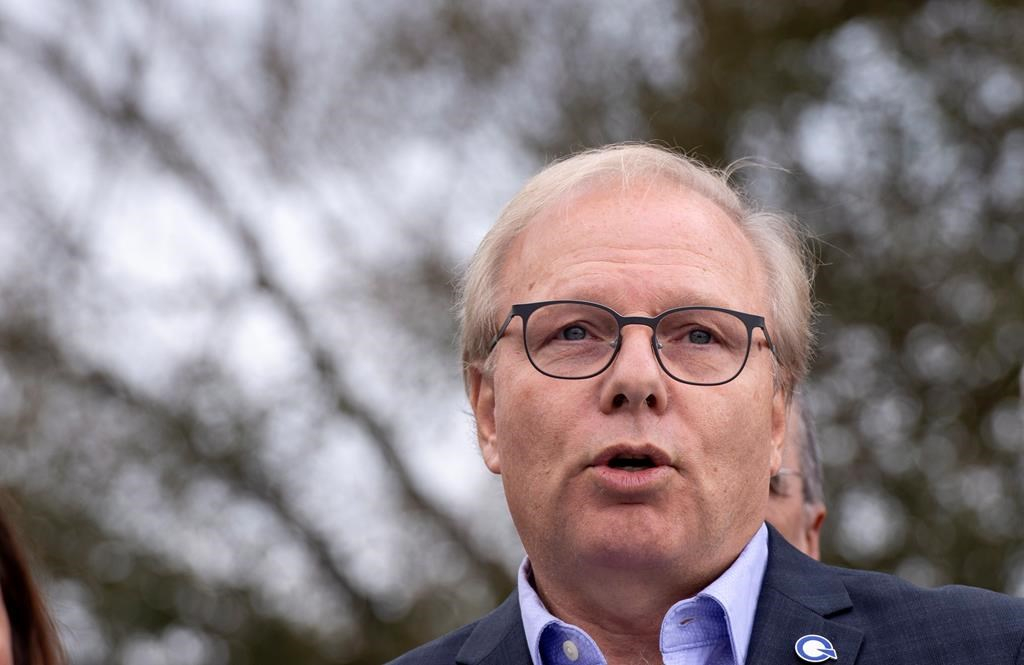 PQ Leader Jean-Francois Lisee responds to questions from reporters during a campaign stop in Acton Vale, Que., on Friday, Sept. 28, 2018. Photo by The Canadian Press/Paul Chiasson
Previous story
Next story

Pawning off immigrant health care costs on the federal government and a "racist" website displaying embarrassing comments from Parti Quebecois members were some of the highlights from Day 37 of Quebec's election campaign.

Entering the final weekend before Monday's vote, the PQ went to court to try to shut down a website the party said was using its logo to spread racist messages online.

Ironically, the website also includes authentic quotations from PQ Leader Jean-Francois Lisee about burkas and from one of his candidates using an offensive term for black people on Twitter.

The website, serieusement.fun, uses the PQ's logo, and the site's background colour is similar to the party's signature blue.

Visitors to the site are invited to type in a message above the party's official slogan, "Seriously," and to share the meme they create on social media.

It also gives visitors examples of messages to type into the program as "inspiration."

One of the examples is a quote Lisee gave to Le Devoir in 2016 when he was running for his party's leadership: "AK-47s under burqas, it's proven."

Lisee was criticized heavily at the time for his words, which suggested Islamic women could hide weapons under their religious clothing.

Another source of "inspiration" is an old tweet by Blanc in which she used the French-language term for the N-word to describe a man who sounded "African" on the phone: "Your voice is African and I don't call you my little 'N-word'."

Blanc, who is a trans woman, has said she tweeted that in anger because the phone operator kept referring to her as a man.

In an email to The Canadian Press, a PQ spokesperson confirmed the party filed a request for a court injunction to have the site — whose creator is unknown — shut down.

"This internet site — to which we don't want to give visibility — uses without authorization our image and logo in order to ties us to statements that we estimate are racist and defamatory."

Meanwhile, Coalition Avenir Quebec Leader Francois Legault told reporters that Ottawa should pay the health-care costs of those who run afoul of his controversial immigration policy.

A Coalition government would force newcomers to pass a French-language and Quebec values test within three years of their arrival.

Those who fail would not receive the requisite certificate from Quebec in order to be eligible for Canadian citizenship, leaving them open to expulsion from the country by the federal government.

Legault said newcomers who fail the test would have the right to health care until they are removed, but he suggested Ottawa should pay for it.

He seemed to minimize the effects of his immigration policy during a Montreal radio interview earlier in the morning.

The radio host said Legault's policy would create "undocumented" people, to which Legault responded, "They exist in every country."

Later, Marc Tanguay, a Liberal candidate in a Montreal riding, showed up at one of Legault's campaign stops in Montreal to talk about an unflattering Washington Post article published that morning.

The opinion piece describes the Coalition as a "center-right party promising to slash immigration and to kick out all immigrants who fail tests of 'values' and the French language."

Also on Friday, Quebec's electoral officer revealed approximately 18 per cent of eligible voters cast a ballot early, slightly lower than the roughly 19 per cent of Quebecers who voted early in 2014.

An Ipsos poll published Friday by La Presse and Global News, indicated a tight race, with the Coalition at 32 per cent support and the Liberals at 31 per cent.

The PQ came in third with 18 per cent, and Quebec solidaire had 16 per cent.

Ipsos surveyed 1,250 adult Quebecers online and by telephone, between Sept. 26-28.