Without sovereignty as issue, Quebec leaders struggled to offer vision 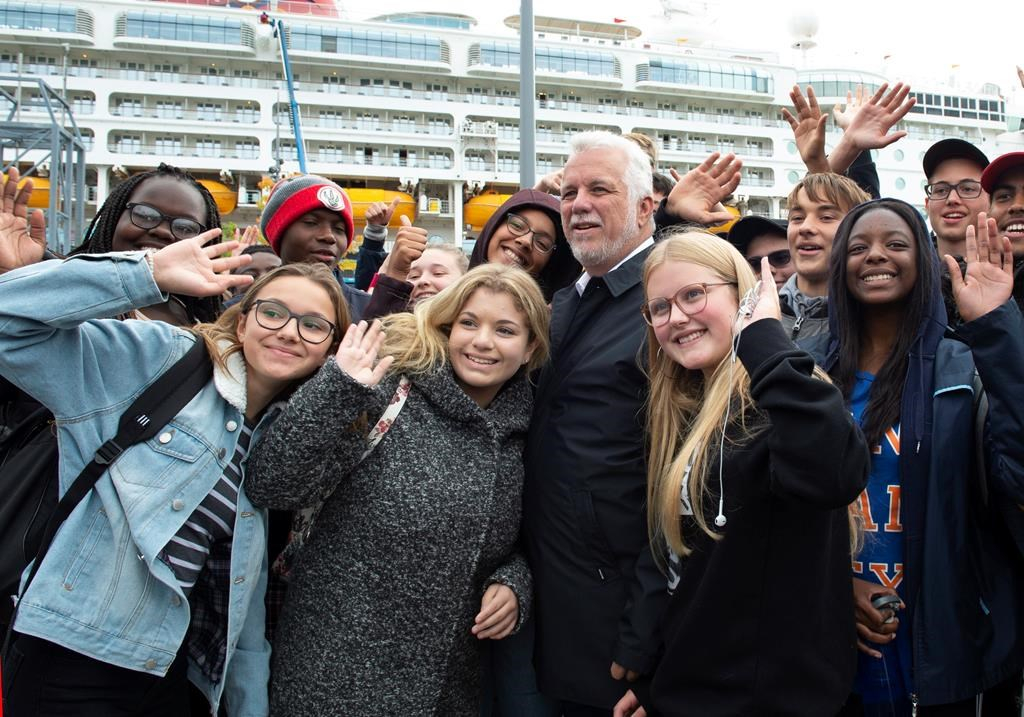 Quebec Liberal Leader Philippe Couillard poses with Chateauguay students on a visit, after a news conference on Friday, September 28, 2018 in Quebec City. Photo by The Canadian Press/Jacques Boissinot
Previous story

Quebecers head to the polls Monday after a rare election campaign in which independence was not an issue and parties were left struggling to present a clear vision to voters.

Public opinion polls have for months indicated a majority of Quebecers want a change from the Liberals — who have ruled for 13 of the past 15 years — yet no party emerged as the stand-alone favourite to replace them.

"The three major parties haven't articulated a vision — none of them," Harold Simpkins, a Concordia University professor and political commentator, said in an interview.

This election, rather, is more about what the parties aren't proposing, he said.

For the first time since it was led by its founder, Rene Levesque, the Parti Quebecois is pledging to not hold a referendum on sovereignty in its first mandate.

Therefore, all three major parties are now offering Quebecers a government that won't actively try to remove the province from Canada.

As Quebec's economy remains strong and unemployment low, the four parties with seats in the legislature have spent most of the campaign telling Quebecers how they would spend billions of dollars in budget surpluses.

Issues of identity, language and culture, mostly as they relate to immigration, have replaced sovereignty at the campaign forefront.

Francois Legault and his Coalition Avenir Quebec started the 39-day campaign atop the polls. He told reporters he would "take nothing for granted" and work to "earn the trust of Quebecers."

He spoke about cutting taxes, investing in education, health care and seniors.

Then, a couple of weeks into the campaign, he began talking about identity, saying if immigration isn't reduced, he feared his "grandchildren won't speak French."

That strategy opened him up to relentless attacks by Liberal Leader Philippe Couillard.

The Liberals used to run campaigns warning Quebecers that a vote for another party was a vote for ripping Quebec out of Canada.

Robbed of their go-to bogeyman, they decided to hit Legault on identity issues.

The Coalition promises to reduce annual immigration by 20 per cent and "expel" newcomers who fail to pass a French-language and Quebec values test within three years of arriving.

Couillard said the policy would hurt the economy because the province is suffering job shortages.

The policy is also heartless, the Liberal leader added.

Legault didn't help his cause by dodging questions about how immigrants would be expelled from the province because enforcement is a federal responsibility.

PQ Leader Jean-Francois Lisee started the campaign in a distant third place in the polls and has remained there.

Early on he seemed cheerful and relaxed, while promising voters a strong, healthy state at the service of citizens.

That all changed in the last debate, when he went on the attack against the fourth-placed party.

He stared at Manon Masse, co-spokesperson for Quebec solidaire, and demanded to know "who pulls the strings" in her party because it doesn't have an official "leader."

Instead of one party leader, Quebec solidaire chooses a male and female spokesperson, and Masse is the party's choice for premier should it win Monday's election.

Lisee maintained his attention on Masse for days after the debate, suggesting her party was based on "Marxism" and that she was "manipulating the public."

Lisee's strategy seems to reflect a growing concern in his party: that Quebec solidaire was eating into the PQ vote, especially in Montreal, but also in Quebec City.

Poll aggregators are indicating even Lisee's own Montreal riding is at risk of falling to Masse's party.

Quebec solidaire, which is polling in the mid-teens, is the only party among the four with seats in the legislature that has actively campaigned for Quebec independence.

The party's positions include banning the sale of non-hybrid vehicles on Quebec roads by 2030 and collecting $13 billion more annually for state coffers, through measures such as increases in personal income and corporate taxes.

And while the three major parties can be accused of running a campaign of piecemeal promises, Quebec solidaire has been different, Simpkins said.

"I would surmise that most of the people who moved over to Quebec solidaire know how radical they are," he said. "But they have articulated a vision, presented a leader who is genuine — compared to Legault and Couillard."

Simpkins said even Lisee came off as "really disingenuous" with a promise to put off a referendum for one term.

Due to the realization that Quebec is not likely to separate any time soon, the nationalist voters who used to vote PQ are increasingly turning to the Coalition as a way to ensure the Liberals are voted out of power.

"Our party is the only party that can beat the Liberals," Legault is fond of saying.

An analysis conducted by The Canadian Press suggests all four parties consider many of the PQ's seats are up for grabs.

All but two of the 28 ridings held by the PQ when the legislature was dissolved were visited by political parties this election campaign.

In comparison, 16 Liberal ridings were not visited by any party, while 10 Coalition ridings were left untouched as of Thursday.

And while no party has a clear lead in the polls, one statistic gives Legault the edge.

Quebec's francophone vote decides elections, and the Coalition's share of that precious electorate has been at least 10 percentage points higher than that of its closest rivals.