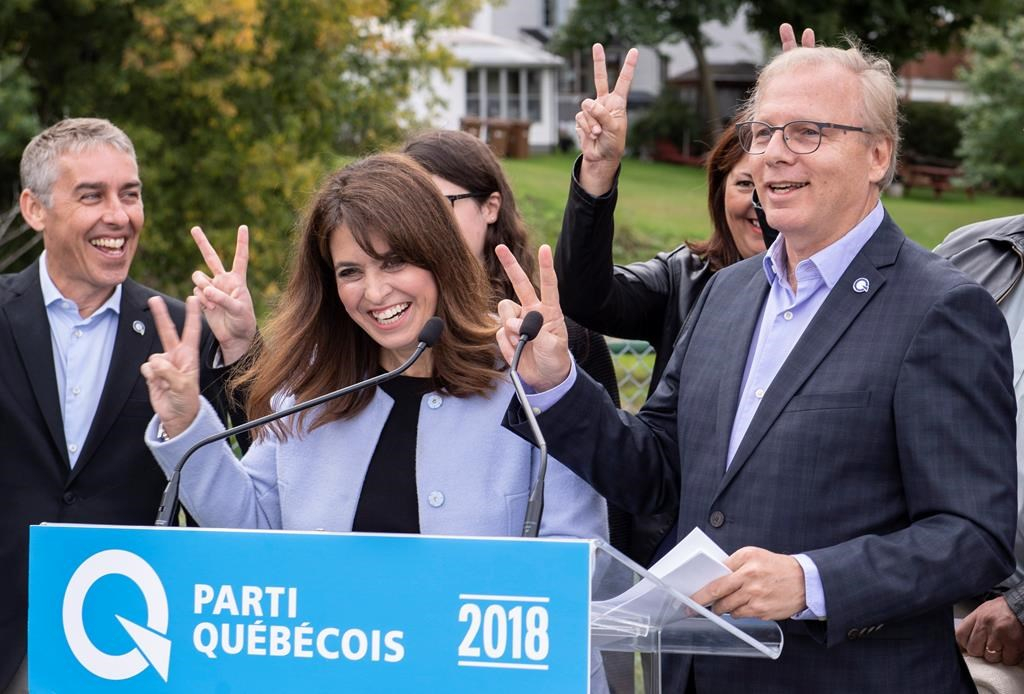 It was 7 a.m. on a Sunday, but Jean-Francois Lisee was full of energy as he met with Parti Quebecois members who'd roused themselves for an early breakfast with their leader.

Less than 12 hours before, he'd bounded onto a stage in front of a packed audience, high-fiving members of his party's youth wing who shouted "Lisee! Lisee! Lisee!" with his campaign music blaring.

"We're acting as though we want to give people money, but secretly we want to save the planet," he said to applause some minutes later, as he discussed his plan to subside carpooling and take cars off the road.

But outside the cheering crowds that pack his partisan rallies, polls suggest Lisee has failed to shift public opinion, despite a punishing campaign pace and two strong debate performances.

The sovereigntist party has remained stubbornly mired in third place, some 10 percentage points behind both the Coalition Avenir Quebec and the Liberals.

And recent numbers have even suggested that third-place standing is being challenged by the surging left-wing Quebec solidaire — a fact Lisee is keenly aware of.

After drawing praise for his performances in the first two leaders' debates — including one in English — Lisee raised eyebrows during the final showdown with an off-topic attack against Quebec solidaire's leadership style.

During an exchange that was supposed to be about health care, Lisee instead questioned Quebec solidaire's Manon Masse about who "pulls the strings" at her party, which has two co-spokespeople but no official leader.

Masse answered that, in her party, "we learned how to share power."

In the days that followed, Lisee doubled down on his attacks, accusing Quebec solidaire of being a "Marxist" party that wants to nationalize all industries in the province.

He also took aim at the party's proposal to replace the tax-free savings account system with a new program that would direct a portion of the investments toward providing loans for energy-efficient renovations.

"They say, 'we're going to confiscate your savings accounts to invest it where we, Quebec solidaire, think it should go,'" Lisee said.

The attacks on Quebec solidaire come toward the end of a campaign that began with Lisee proudly embracing his underdog status.

The 60-year-old former cabinet minister and one-time adviser to Jacques Parizeau and Lucien Bouchard was fond of noting he wasn't the favourite to win his party's leadership in 2016.

But he did indeed become leader of a party that had just come off one of its worst defeats in history, winning just 25 per cent of the popular vote in 2014 and only 30 of the province's 125 seats.

Lisee, who has served in the legislature since 2012, entered the race with a bold promise to not hold a referendum on sovereignty in his first mandate as premier.

Instead, he's banked on a generally left-of-centre platform that includes electrifying the public transit network, eventual free schooling, stronger language laws, and leveraging the threat of an eventual referendum to force Ottawa to fork over billions of dollars he says Quebec is owed.

But so far, Lisee's attempt to broaden his party's appeal seems to have backfired, with voters seeking change appearing to be turning toward either the Coalition or Quebec solidaire to provide it.

And Quebec solidaire, which also advocates for independence from a Canadian "oil state," looks increasingly to be the favourite option for the young voters the PQ is trying to court.

One of the seats it is vying for is Lisee's own riding of Rosemont, where polls suggest he's running neck and neck with Quebec solidaire candidate Vincent Marissal.

If the current polling numbers are accurate, Lisee's party could be headed for one of its worst showings in history.

But as the Coalition and the Liberals appear deadlocked at about 30 per cent support each, there's still a chance the PQ could hold the balance of power in a minority government.

While he's ruled out forming a coalition with Legault's party or Quebec solidaire, Lisee's remaining coy on all other scenarios, save one.

"If Quebecers elect a minority Parti Quebecois government, we'll respect that and we'll govern as a minority for four years," he said.