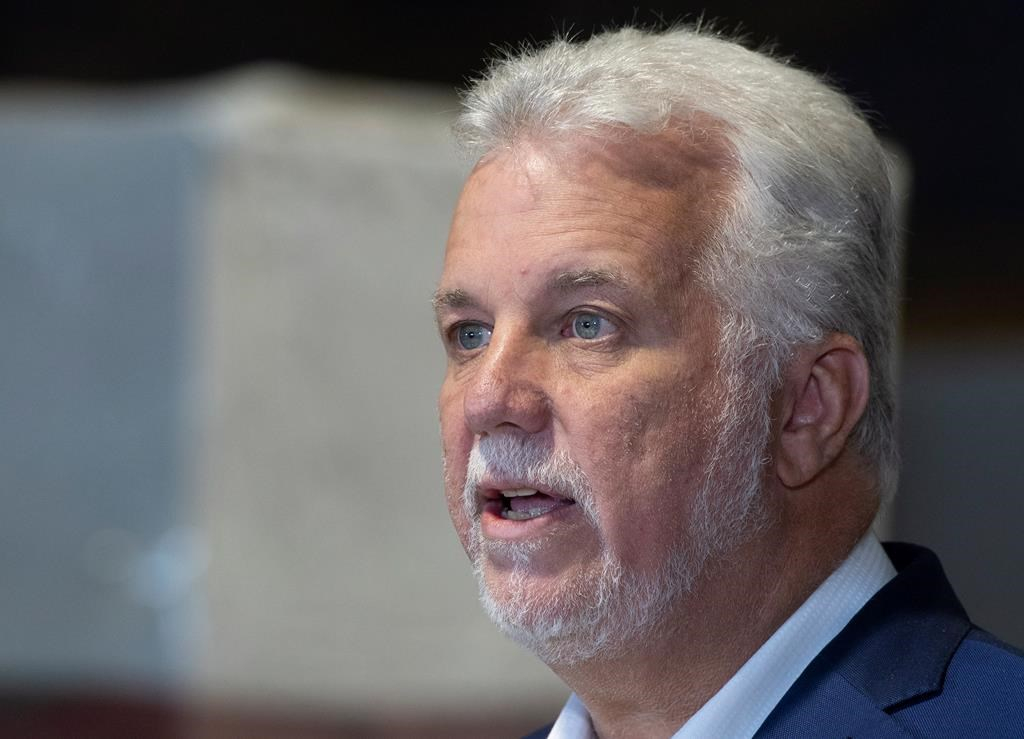 Quebec Liberal Leader Philippe Couillard responds to reporters questions during a visit of a cedar shingle plant in Saint-Prosper, Que., on Thursday, Sept. 27, 2018. Photo by The Canadian Press/Jacques Boissinot
Previous story
Next story

With a robust economy and a main opponent seen as vulnerable, Liberal Leader Philippe Couillard calculated that a longer election campaign would be the secret to securing a second mandate.

To a point, it has worked, as polls suggest his party has caught up to the Coalition Avenir Quebec, the party it had trailed for months.

The two parties find themselves neck and neck heading into the final days of the campaign, and Couillard was striking a confident tone even with his chances very much up in the air.

"The choice is rather simple: What do you want? Who do you trust," he told a recent partisan gathering in Laval. "Do you trust a government that balanced four consecutive budgets, that delivers on its promises or do you trust someone (the Coalition) that cannot even explain one of its policies."

The 61-year-old neurosurgeon urged voters to stick with the plan and stick with the party, promoting the theme of making people's lives easier while touting the party's economic credentials.

He has also gone on the attack against Coalition Leader Francois Legault over immigration. Couillard hopes to make the issue a ballot question Monday, given the province's labour shortage and the optics of expelling recent arrivals who fail a French test.

The Coalition wants to reduce the number of immigrants entering the province yearly to 40,000 from 50,000 and require them to pass a language and values test within three years of their arrival.

“To say if you don't pass the test you could be expelled? Horrible. You can’t talk about people that way,” Couillard told the Montreal Gazette's editorial board.

But the Couillard-led Liberals find themselves with poll numbers that largely haven't budged, unable to attract the francophone voters who could make or break their chances.

The Liberals were in second spot heading into the last campaign in 2014 but ended up winning 70 of the province's 125 ridings.

This time, voters haven't forgotten two years of deep cuts in education and health that followed the Liberal win.

While the Liberals typically do better at the ballot box than in opinion polls, it remains to be seen whether the bump will materialize when their chief opponent is no longer the sovereigntist Parti Quebecois.

"It's never been easy for us Liberals, it never comes easy,'' Couillard told a boot camp with new candidates before the campaign. "We always have to struggle, and fight for what we think we should do. And we always do."

Couillard has tripped up a few times on the trail, including one moment that created international headlines.

A comment to a Montreal radio station that a family of three including two teens could get by on $75 worth of groceries per week had his opponents casting him as out of touch. He clarified the menu would lack variety and said the fact some people do survive on the meagre amount highlights the need to do more about poverty.

"I don't have a penny elsewhere than in Quebec,'' Couillard fumed to reporters. "There are two people here. One is a multimillionaire, and it's not me.

"(Legault) smears. He just throws mud around. This is not what a premier does."

Couillard is hoping to break a curse that has befallen the last two sitting premiers: both Jean Charest and Pauline Marois lost their ridings while being ousted from power in 2012 and 2014, respectively.

One former Couillard cabinet colleague not seeking re-election said if the Liberals learned one lesson from their 2014 experience, it's that campaigns count for a lot.

"I think one of the things you take away is that campaigns matter more than ever, there are probably fewer dyed-in-the-wool convicted voters than there used to be,'' said Geoffrey Kelley, who retired from politics before the campaign.

Lisee and Couillard talk transportation on the Quebec campaign trail