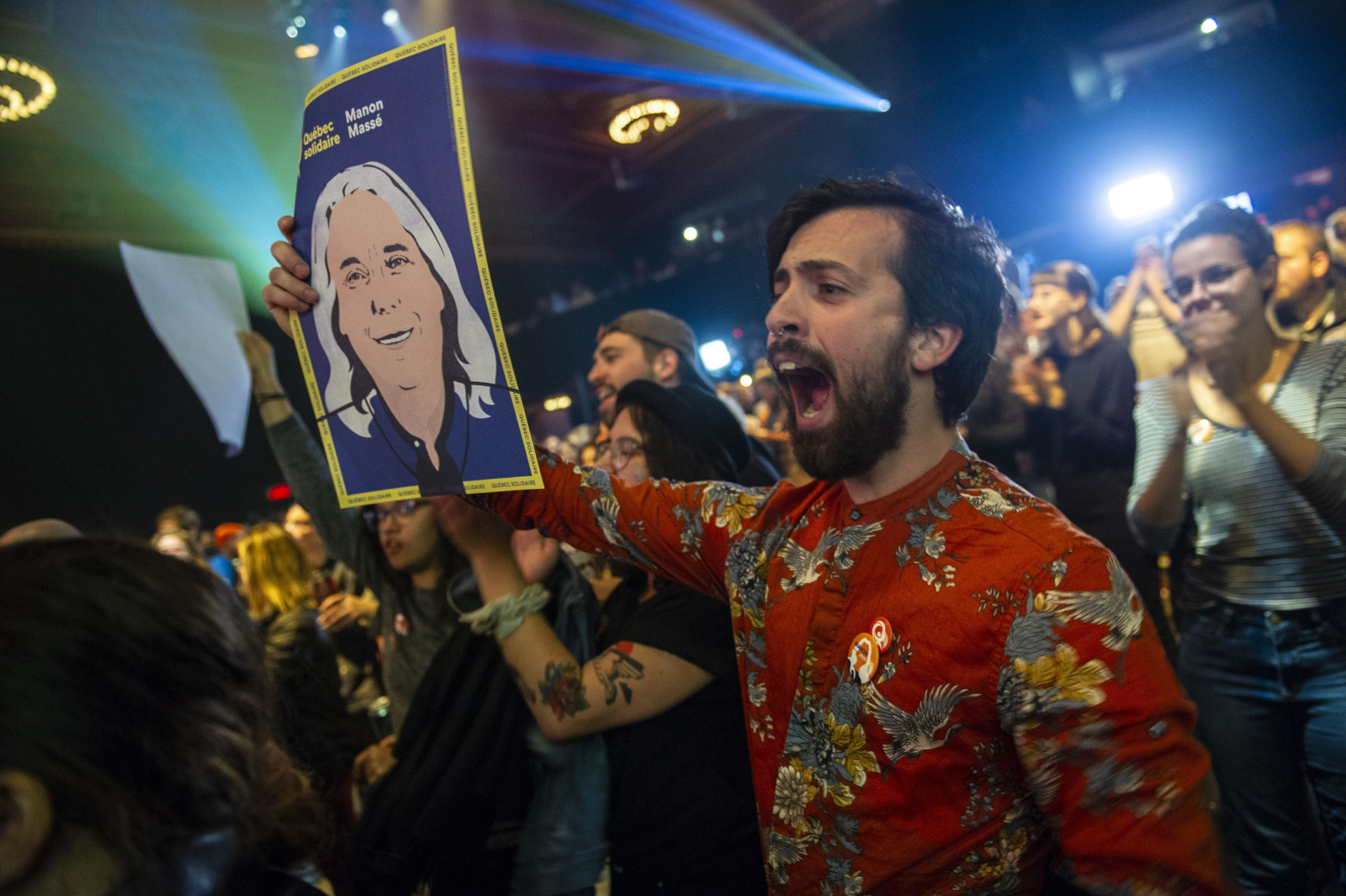 A Québec Solidaire supporter raises a poster of Manon Massé, one of the party's two spokespersons, at a rally on election night, Oct. 1, 2018. Photo by Andrej Ivanov
Previous story
Next story

Québec solidaire supporters were jubilant as the party tripled its seats in the National Assembly in Monday's provincial election.

The left-leaning, sovereignist Québec solidaire (QS) won or was leading in 10 seats late in the evening.

To deafening applause, one of the party's two spokespersons, Gabriel Nadeau-Dubois, declared the QS gains a “historic victory” at a boisterous gathering of supporters in Montreal.

Marissal took the stage with his three daughters and wife, saying it was a “huge honour” to represent Rosemont. He also encouraged the crowd to be “elegant and dignified” when they started booing his adversaries in the riding. He thanked Lisée for his service to the riding and also to provincial politics over 25 years.

“Let’s never say that cynicism wins in Quebec,” he cried over roars of approval, which only grew louder when he passionately embraced his wife at the podium.

Marissal told reporters later that he takes“no personal satisfaction from beating Lisée. "That was not my goal, and not the reason why I jumped into the race.”

As the QS gains increased throughout the evening, the fortunes of Lisée's more traditional sovereigntist party declined.

The QS added the new ridings to the three seats it held at dissolution, the Montreal seats of Mercier, Gouin and Sainte-Marie-Saint-Jacques.

For the first time, Québec Solidaire won seats outside of Montreal's inner city. Two of them, Jean-Lesage and Taschereau, are in the Quebec City area, and one, Rouyn-Noranda-Temiscamingue, is in western Quebec. QS also retained its three Montreal inner-city ridings and took Laurier-Dorion and Sherbrooke from the Liberals and Rosemont from the PQ.

A packed and informal crowd gathered under the rich red roof of Montreal’s grand 1920s movie theatre, l’Olympia. Orange light — in line with QS’ branding — streamed from the ceiling and the stage throughout the evening.

After his re-election in Gouin, Nadeau-Dubois took the stage, proudly proclaiming that QS was now “rooted across Quebec.” He referred to Catherine Dorion’s election in the Quebec City riding of Taschereau — the party's first ever seat outside of inner Montreal.

Nadeau-Dubois had some fighting words for victorious Coalition Avenir Québec leader Francois Legault — that QS will continue to work to be an obstacle to the CAQ’s agenda, saying that the "march continues.” He literally jumped and danced for joy before leaving the stage at l'Olympia Theatre in Montreal's Gay Village. The venue is located inside of the riding of Sainte-Marie-Saint-Jacques, held by the other QS spokesperson Manon Massé.

Questioned later in a media scrum by National Observer, Nadeau-Dubois said that sovereignty “is still alive in Quebec, and if we want it to grow, we need to redefine it — it's what QS has been doing for 12 years, we could have hidden from the idea.” He pointed to the election of Catherine Dorion and Sol Zanetti, “two young (sovereignist) leaders,” as a sign of the project’s potential.

"I would have liked to see a minority government," Amir Khadir, the first QS candidate elected to the National Assembly, told National Observer in an interview. Khadir, who did not run this time, said a minority would have given the population a chance to see how the CAQ performs before making a bigger commitment. He was pleased by QS momentum and said the party would work to ensure climate change is on the political agenda.

"We are no longer the party of the Plateau-Mont Royal," Massé told a rapturous crowd in her speech at the close of the evening. She spoke about how QS had won the first battle — “the battle for hope.” She said the premier-designate had a “heavy responsibility” to lead Quebec into an energy transition, “because it's too late to wait for another election.”

And while many commentators noted the election was not dominated by sovereignty issues, Massé’s speech made it clear that her party was commited to Quebec's independence from Canada.

Winning candidates Ruba Ghazal and Andrès Fontecilla took the stage to celebrate their victories, both stressing in their remarks that they were born to immigrant families. Ghazal, who won in Mercier, profusely thanked Khadir, her predecessor, for “everything he’s done” for the party and for Mercier’s inhabitants.

Ghazal told reporters later that the party will be a “constructive” opposition — meaning that they will give credit where credit is due she said.

Québec solidaire remained in fourth place throughout the 39-day election campaign, but was the only party to steadily climb in popularity. Poll aggregating website qc125.com showed popular support for the party surged from 9.7 per cent on Aug. 15 to 15.1 per cent on Sunday, eve of the vote.

In May 2017, QS rejected the PQ’s offer to form an alliance between the two sovereignist parties ahead of the provincial election.

As the gap between his party and QS shrank during the 2018 campaign, Lisée had multiplied his attacks on the other sovereignist party. During the final election debate, he veered off topic to ask Manon Massé, one of two co-spokespersons, who ‘pulled the strings’ in QS. Days later, he accused the left-leaning party of being “Marxist” and accused Massé of "manipulating voters" by not being clear about the party’s plans to nationalize parts of the economy.

Massé’s calm, straightforward and no-frills approach in the three televised election debates — even when her vocabulary was limited in English — set her apart from her male adversaries, who were loud, combative and spoke on top of each other.

The QS platform resonated with young people. It pledged to raise $13 billion for government coffers by hiking taxes on the rich and corporations in order to pay for a bold suite of social programs, such as universal dental insurance and free education up until university. Its campaign has also centered on protecting the environment, including a ban on sales of all non-hybrid or gasoline-fuelled vehicles by 2030, and a ban on all hydrocarbon exploration and exploitation in Quebec.

QS and the PQ are both still short of enough seats for official party status, which grants privileges that include the right to ask questions during question period in the legislature.

Established in 2015, National Observer is an independent, online-only newspaper dedicated to investigating stories about climate change, energy and politics. In 2017, National Observer’s managing editor Mike De Souza won a Canadian Association of Journalists award for hisinvestigation exposing a conflict of interest in the federal review of the Energy East pipeline project, which was subsequently terminated.