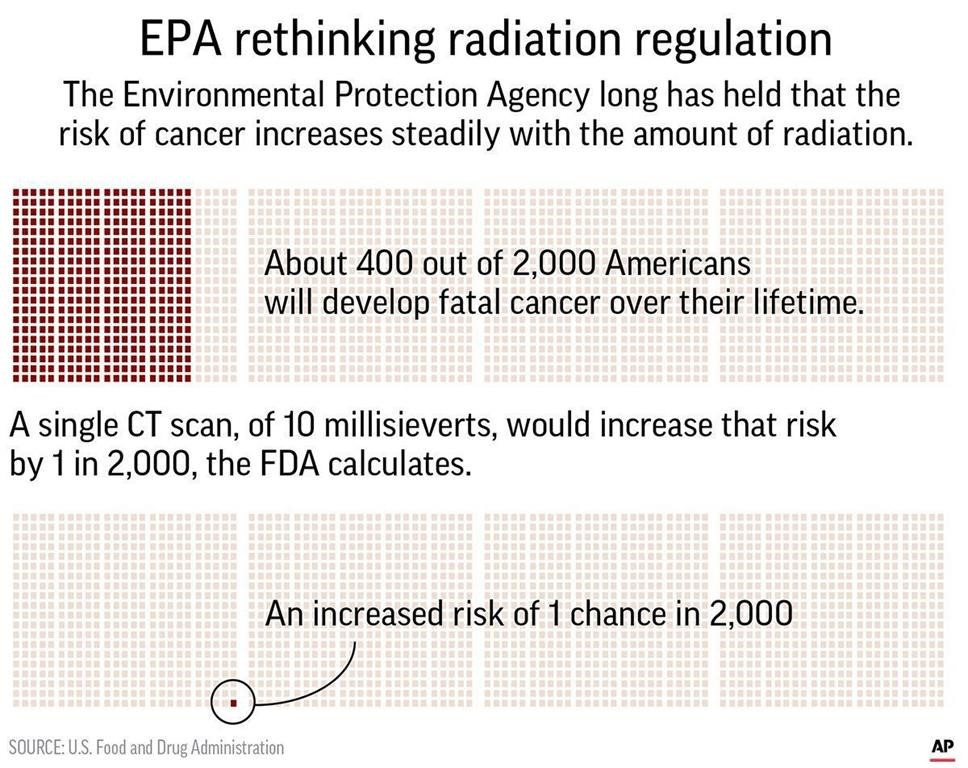 The U.S. Environmental Protection Agency is pursuing rule changes that experts say would weaken the way radiation exposure is regulated, turning to scientific outliers who argue that a bit of radiation damage is actually good for you — like a little bit of sunlight.

The government's current, decades-old guidance says that any exposure to harmful radiation is a cancer risk. And critics say the proposed change could lead to higher levels of exposure for workers at nuclear installations and oil and gas drilling sites, medical workers doing X-rays and CT scans, people living next to Superfund sites and any members of the public who one day might find themselves exposed to a radiation release.

The Trump administration already has targeted a range of other regulations on toxins and pollutants, including coal power plant emissions and car exhaust, that it sees as costly and burdensome for businesses. Supporters of the EPA's proposal argue the government's current model that there is no safe level of radiation — the so-called linear no-threshold model — forces unnecessary spending for handling exposure in accidents, at nuclear plants, in medical centres and at other sites.

At issue is the Environmental Protection Agency's proposed rule on transparency in science.

Lower limits would save billions of dollars, toxicologist says

EPA spokesman John Konkus said Tuesday: "The proposed regulation doesn't talk about radiation or any particular chemicals. And as we indicated in our response, EPA's policy is to continue to use the linear-no-threshold model for population-level radiation protection purposes which would not, under the proposed regulation that has not been finalized, trigger any change in that policy."

But in an April news release announcing the proposed rule, the agency quoted Edward Calabrese, a toxicologist at the University of Massachusetts who has said weakening limits on radiation exposure would save billions of dollars and have a positive impact on human health.

The proposed rule would require regulators to consider "various threshold models across the exposure range" when it comes to dangerous substances. While it doesn't specify radiation, the release quotes Calabrese calling the proposal "a major scientific step forward" in assessing the risk of "chemicals and radiation."

Konkus said the release was written during the tenure of former EPA Administrator Scott Pruitt. He could not explain why Calabrese was quoted citing the impact on radiation levels if the agency does not believe there would be any.

Calabrese was scheduled as the lead witness at a congressional hearing Wednesday on the EPA proposal.

Radiation is everywhere, from potassium in bananas to the microwaves popping our popcorn. Most of it is benign. But what's of concern is the higher-energy, shorter-wave radiation, like X-rays, that can penetrate and disrupt living cells, sometimes causing cancer.

As recently as this March, the EPA's online guidelines for radiation effects advised: "Current science suggests there is some cancer risk from any exposure to radiation."

"Even exposures below 100 millisieverts" — an amount roughly equivalent to 25 chest X-rays or about 14 CT chest scans — "slightly increase the risk of getting cancer in the future," the agency's guidance said.

But that online guidance — separate from the rule-change proposal — was edited in July to add a section emphasizing the low individual odds of cancer. "According to radiation safety experts, radiation exposures of ... 100 millisieverts usually result in no harmful health effects, because radiation below these levels is a minor contributor to our overall cancer risk," the revised policy says.

Calabrese and his supporters argue that smaller exposures of cell-damaging radiation and other carcinogens can serve as stressors that activate the body's repair mechanisms and can make people healthier. They compare it to physical exercise or sunlight.

Mainstream scientific consensus on radiation is based on deceptive science, says Calabrese, who argued in a 2014 essay for "righting the past deceptions and correcting the ongoing errors in environmental regulation."

EPA spokesman Konkus said in an email that the proposed rule change is about "increasing transparency on assumptions" about how the body responds to different doses of dangerous substances and that the agency "acknowledges uncertainty regarding health effects at low doses" and supports more research on that.

'Dismissed by great bulk of scientists'

The radiation regulation is supported by Steven Milloy, a Trump transition team member for the EPA who is known for challenging widely accepted ideas about manmade climate change and the health risks of tobacco. He has been promoting Calabrese's theory of healthy radiation on his blog.

But Jan Beyea, a physicist whose work includes research with the National Academies of Science on the 2011 Fukushima nuclear power plant accident, said the EPA science proposal represents voices "generally dismissed by the great bulk of scientists."

The EPA proposal would lead to "increases in chemical and radiation exposures in the workplace, home and outdoor environment, including the vicinity of Superfund sites," Beyea wrote.

At the level the EPA website talks about, any one person's risk of cancer from radiation exposure is perhaps one per cent, Beyea said.

"The individual risk will likely be low, but not the cumulative social risk," Beyea said.

"If they even look at that — no, no, no," said Terrie Barrie, a resident of Craig, Colorado, and an advocate for her husband and other workers at the now-closed Rocky Flats nuclear-weapons plant, where the U.S. government is compensating certain cancer victims regardless of their history of exposure.

"There's no reason not to protect people as much as possible," said Barrie.

U.S. agencies for decades have followed a policy that there is no threshold of radiation exposure that is risk-free.

The National Council on Radiation Protection and Measurements reaffirmed that principle this year after a review of 29 public health studies on cancer rates among people exposed to low-dose radiation, via the U.S. atomic bombing of Japan in World War II, leak-prone Soviet nuclear installations, medical treatments and other sources.

Twenty of the 29 studies directly support the principle that even low-dose exposures cause a significant increase in cancer rates, said Roy Shore, chief of research at the Radiation Effects Research Foundation, a joint project of the United States and Japan. Scientists found most of the other studies were inconclusive and decided one was flawed.

None supported the theory there is some safe threshold for radiation, said Shore, who chaired the review.

If there were a threshold that it's safe to go below, "those who profess that would have to come up with some data," Shore said in an interview.

"Certainly the evidence did not point that way," he said.

The U.S. Food and Drug Administration, which regulates electronic devices that emit radiation, advises, broadly, that a single CT scan with a dose of 10 millisieverts may increase risks of a fatal cancer by about 1 chance in 2,000.

Supporters of the proposal say it's time to rethink radiation regulation.

"Right now we spend an enormous effort trying to minimize low doses" at nuclear power plants, for example, said Brant Ulsh, a physicist with the California-based consulting firm M.H. Chew and Associates. "Instead, let's spend the resources on minimizing the effect of a really big event."