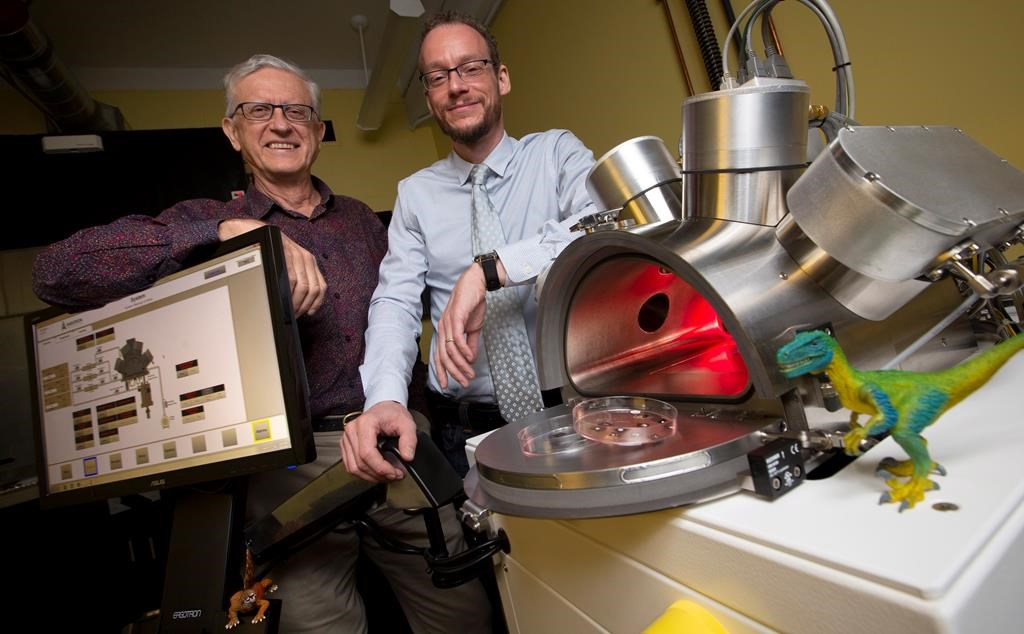 Professors Maikel Reinstadter, right, and Ralph Pudritz pose for a photo with the planet simulator in the origins of life lab at McMaster University in Hamilton, Ont., on Wednesday, Oct. 3, 2018. Photo by The Canadian Press/Peter Power
Previous story

A small group of Ontario researchers believe they may have solved the origins of life mystery.

The results come from early experiments run in a planet simulator at McMaster University's new Origins of Life Laboratory, which started running this summer.

The simulator — the centrepiece of the facility — is testing a theory that suggests life on Earth began in warm little ponds after meteorites splashed into them about four billion years ago. The machine recreates those conditions to see whether cellular life can be created and then evolve.

"This is a very big moment," said Maikel Rheinstadter, a biophysics professor and the lead investigator in the new laboratory. "There's nothing else like this machine in the world."

The warm little ponds theory was first put forth by Charles Darwin, expanded on in the 1990s by Carl Sagan, and further developed by David Deamer, a professor in bioengineering at the University of California, Santa Cruz.

Evidence over the last few years points away from another theory that suggests the building blocks of life came about through vents in the Earth's crust at the bottom of the ocean.

Rheinstadter and two colleagues — Ralph Pudritz, a theoretical astrophysicist and Yingfu Li, a biochemist — are now putting that theory into action.

"We are very interested in understanding how the first very basic cell formed on the early Earth four billion years ago," Rheinstadter said. "Nobody knows, but I think that's what we have: a very solid proposal that this is potentially the mechanism."

The lab's work is in its early stages and the planet simulator's recent results must be replicated, Rheinstadter said, but what researchers have seen so far is promising.

The new planet simulator at the heart of their efforts is about the size of a microwave and can control temperature, humidity, pressure, atmosphere and radiation levels to mimic conditions on Earth at any point in its history. It can also create the conditions of any other planet.

It took years to get the machine built — most companies said they simply couldn't make it — but a company in Kitchener, Ont., was able to take on the project, Rheinstadter said.

When the machine was operational, the researchers used it to mimic a summer season on early Earth — a volcanic environment that was very hot during the day and cool at night, with the odd day of rain and periodic flooding.

Inside the simulator's chamber were elements of the "primordial soup" that existed at the time, which includes inorganic salts, clays, lipid molecules and nucleotides at varying concentrations, Rheinstadter said.

The researchers ran the machine for a few weeks through important wet-dry cycles, which drive biochemical reactions, with entire seasons being replicated in days. After a time, they began to see results.

"The molecules started to form cell-like structures and they started to incorporate genetic material just by themselves," Rheinstadter said. "It's amazing."

The researchers say they have shown that they can create what are known as proto-cells, which aren't considered alive because the scientists still have to demonstrate that the genetic material in the cells can replicate itself and create proteins. But the results are still significant, they said.

The developments in the lab come after research from Pudritz and graduate student Ben K.D. Pearce last year calculated that meteorites bombarded the Earth and delivered the building blocks of life that then bonded together to become ribonucleic acid — the basis for the genetic code. It's that very research that the McMaster team is now testing.

It's taken years to get the lab and its simulator up and running.

In 2012, Rheinstadter along with Pudritz and Li applied to the Canada Foundation for Innovation, an independent non-profit, for funding for their research.

The team's proposal to search for the origins of life happened to come at the right time as shortly thereafter NASA began reporting a flurry of discoveries of exoplanets where conditions could exist to support life. Public interest on the subject surged and the team's bid for funds to build their simulator was approved.

"We're really fortunate and we're now about five years ahead of everyone else in the business," he said.

Other leaders in the field are now clambering to get involved with the lab, including luminaries from the Max Planck Institute for Astronomy in Germany, Harvard University and the University of California, Santa Cruz, Rheinstadter said.

The lab and its simulator have also been lauded by Deamer, the California professor who has worked on the warm ponds theory.

"It's marvellous," Deamer said. "They'll be able to do experiments no one else can. They just need the governments to open up their coffers to help pay for more collaborations because laboratories around the world want in on this."

Deamer called the planet simulator "game changing" and said the cells it has created so far are significant.

"These cells are not alive, but are evolutionary steps toward a living system of molecules," he said. "It opens up a lot of experimental activities that were literally impossible before."

Fascinating! All I can think

Fascinating! All I can think of is under a Conservative federal government, these amazing scientists may be on the street!