Philippe Couillard leaves politics with plea for tolerance of minorities 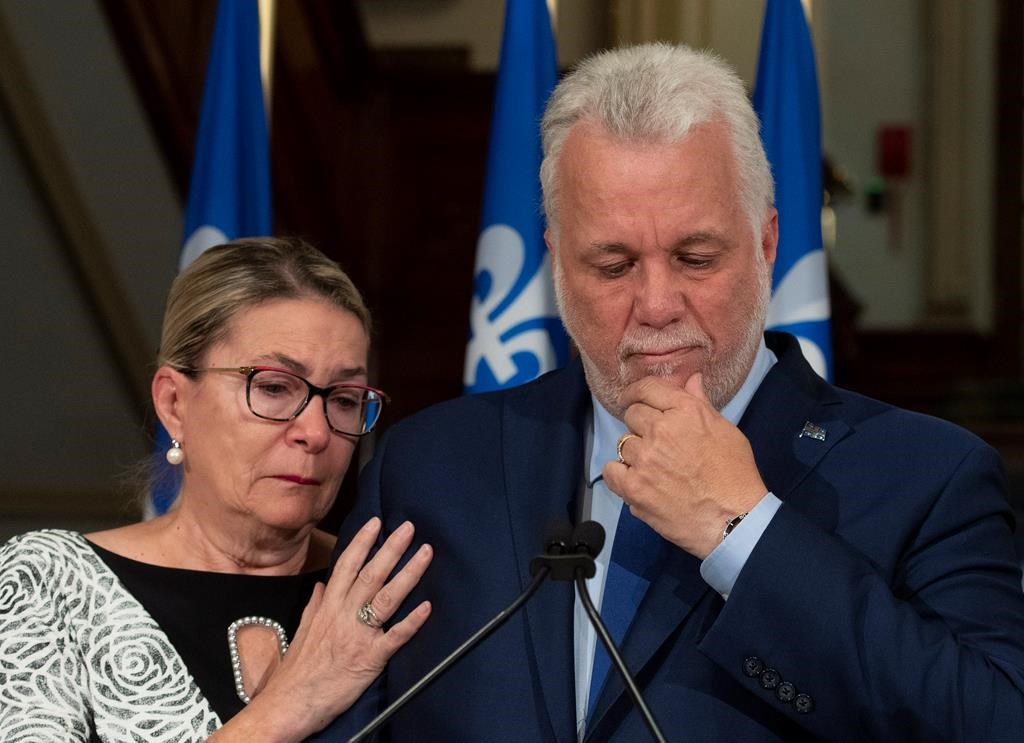 Philippe Couillard pauses as he gets emotional while announcing his resignation as Premier and MNA for the riding of Roberval, on Oct. 4, 2018 at the legislature in Quebec City. Couillard's wife Suzanne Pilote comforts him. Photo by The Canadian Press
Previous story
Next story

Outgoing Quebec premier Philippe Couillard made an impassioned plea for the respect of minority rights Thursday as he announced he is leaving politics following the Liberals' election defeat.

"The majority does not have all the rights, and those that it exercises must be compensated by a protection of those of minorities," he said in the foyer of the national assembly in Quebec City. "It is a fundamental democratic principle."

The message seemed squarely aimed at Francois Legault's Coalition Avenir Quebec, which swept to power Monday on a platform promising a hard line on religious symbols in the public service and immigration.

It was toward the end of Couillard's roughly 10-minute speech, that he said he wanted to speak about "our freedoms."

"Over the course of our 400 years of history, we have defended them, sometimes to the point of ultimate sacrifice," he said. "They are contained in the Quebec and Canadian charters of rights and freedoms. They are precious and therefore fragile. Let's take good care of them."

He quoted the French author Amin Maalouf, who said the treatment of minorities is "one of the surest indicators of moral progress, or of regression." Couillard said Quebec must remain "an inclusive society where all are invited to the table, a place where humans are judged for what is in their heads, their hearts, for what they have to contribute."

He made the announcement alongside his wife Suzanne Pilote, who put her arm around him as he choked up at one point. He was greeted by a long ovation and cries of his name from the Liberal candidates and staffers present.

"The unequivocal general election result, even after a mandate that was marked by a recovery and a historic revival of Quebec, leads me to make this decision," Couillard said. "The desire for change was clearly expressed, so we must accept the consequences."

Elected premier in 2014, Couillard served one mandate before his Liberals were swept from office by the Coalition.

The 61-year-old neurosurgeon had campaigned on his government's economic record, pointing to four consecutive balanced budgets and a thriving Quebec economy. But he led a party that had been in power for 13 of the past 15 years, and voters were thirsty for change.

The Coalition presented itself as the key to breaking the 50-year grip of the federalist Liberals and sovereigntist Parti Quebecois on Quebec politics. It also capitalized on identity issues, promising to reduce immigration, impose French and values tests on new arrivals and prohibit public servants in positions of authority from wearing religious symbols.

In Montreal, Prime Minister Justin Trudeau lauded the staunchly federalist Couillard, saying "service to his community and his country is at the heart of who he is."

"I don't think any state should be dictating what people wear or don't wear," Trudeau told reporters. "I think it's something that we've clearly stated. Defending people's rights and freedoms is core to, certainly, what I believe in and what my party and my government believes in, so we will continue to make that very clear."

Couillard repeated his election night boast that he was leaving the province in "much better shape" than he found it when he took office.

"With a record to be envied and the result of the Oct. 1 election, after having put all my energy into the service of Quebec, remaining in politics in no matter what role is beyond what I feel humanly capable of doing," he said.

Couillard entered politics in 2003 and served as health minister in Jean Charest's government from 2003 to 2008. He left politics in 2008 but returned to become Liberal leader five years later.

The Liberal caucus, reduced to 32 members Monday compared with 74 for the Coalition, will meet Friday to name an interim leader and set the groundwork for an eventual leadership race.

-- With files from Sidhartha Banerjee