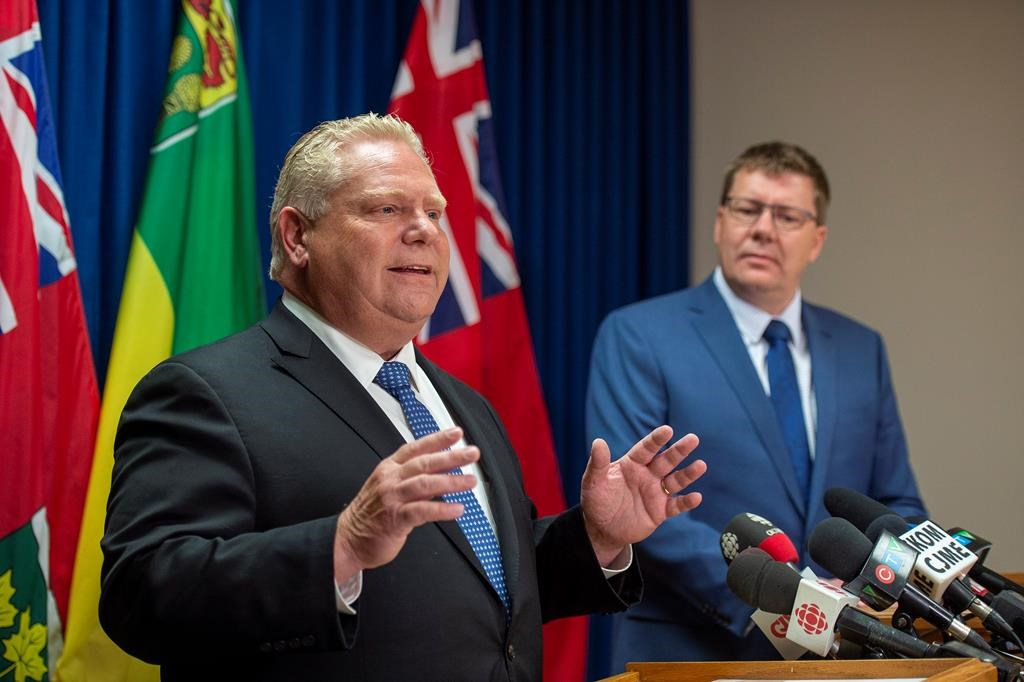 Premier of Ontario Doug Ford, left, speaks as Premier of Saskatchewan Scott Moe listens during a media event in Saskatoon, on Thursday, October 4, 2018. Photo by The Canadian Press/Liam Richards
Previous story
Next story

The premiers of Saskatchewan and Ontario welcomed another province into their anti-carbon-tax tent on Thursday and said the fight against Ottawa's plan to put a price on pollution is gaining momentum.

Ontario's Doug Ford and Scott Moe from Saskatchewan said they were pleased at Manitoba's about-face on its intention to bring in a carbon levy.

Manitoba Premier Brian Pallister announced on Wednesday that his province will not be going ahead with a $25-a-tonne levy that was to come into effect in December. He said the province was pulling out because Ottawa has not backed down from its intention to bring in its own higher rate.

"We have common ground in our opposition to the federal government's attempted imposition of a carbon tax," Moe said after a meeting with Ford in Saskatoon.

"It's clear that opposition to this ill-advised, destructive policy is growing across the nation."

The federal Conservatives couldn't contain their delight either at Pallister's move.

His fellow Manitoba MP, Candice Bergen, said her party had not pressured the province's Progressive Conservative premier to change his mind but was "pleasantly surprised" when he did so.

Moe and Ford met Thursday to talk about their economic ties as well as what Ford called Prime Minister Justin Trudeau's job-killing and "nasty, nasty tax."

The two conservative leaders said they will continue to fight the tax together and, to that end, Moe announced Saskatchewan will file for intervener status in Ontario's court challenge of the federal government's carbon-pricing plan.

Ontario had already pledged to support Saskatchewan's challenge when the premiers met in New Brunswick in July. Moe's government has asked Saskatchewan's Court of Appeal to rule on whether the federal plan is constitutional.

"Saskatchewan and Ontario will continue to be strong allies in the fight against a destructive, made-in-Ottawa carbon tax that does nothing for our environment and is a direct cost to businesses, jobs and to families," Moe said.

Ford also spoke in glowing terms of Jason Kenney, "our friend in Alberta," who he said has been fighting carbon pricing since his days as a federal Conservative cabinet minister. Ford is to speak Friday at a "Scrap The Carbon Tax Rally" in Calgary at the invitation of Kenney, who is leader of Alberta's Opposition United Conservatives.

Kenney has promised to repeal Alberta's carbon tax if his party wins next spring's provincial election.

— By Sylvia Strojek in Edmonton. With files from Mia Rabson in Ottawa