In boon for farmers, Trump to lift restrictions on ethanol 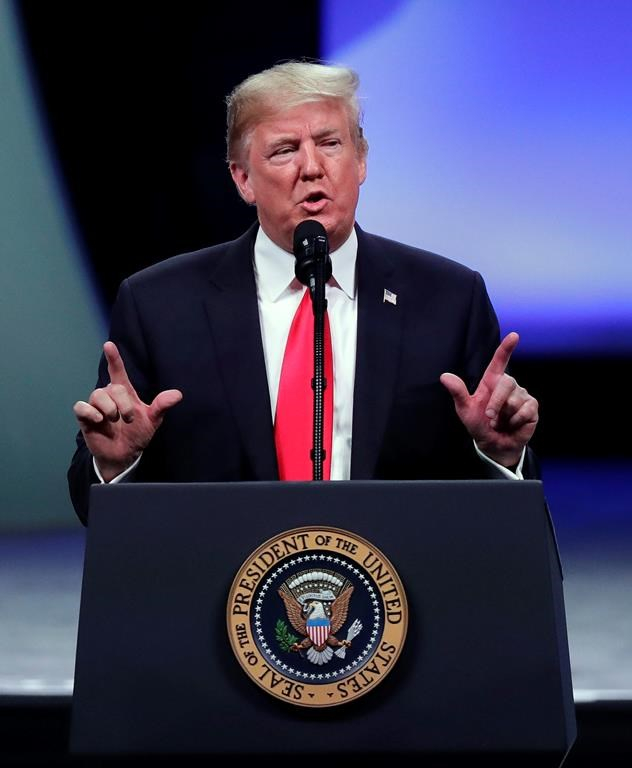 President Donald Trump addresses the International Association of Chiefs of Police at their annual convention on Monday, Oct. 8, 2018, in Orlando, Fla. Photo by The Associated Press/John Raoux
Previous story

The Trump administration is moving to allow year-round sales of gasoline with higher blends of ethanol, a boon for Iowa and other farm states that have pushed for greater sales of the corn-based fuel.

President Donald Trump is expected to announce he is lifting a federal ban on summer sales of high-ethanol blends during a trip to Iowa on Tuesday.

"It's an amazing substance. You look at the Indy cars. They run 100 per cent on ethanol," Trump said at the White House before leaving for Iowa.

He said he wants more energy production and to help farmers and refiners.

"I want more because I don't like $74," Trump said referring to the current price of a barrel of crude oil. "If I have to do more — whether it's through ethanol or another means — that's what I want. I want low prices."

The long-expected announcement is something of a reward to Iowa Sen. Chuck Grassley, who as Senate Judiciary Committee chairman led a contentious but successful fight to confirm Brett Kavanaugh to the Supreme Court. The veteran Republican lawmaker is the Senate's leading ethanol proponent and sharply criticized the Trump administration's proposed rollback in ethanol volumes earlier this year.

Grassley called the proposal "a very good victory for agriculture," ethanol workers and the environment. "Everything about this is good, good, good," Grassley said Tuesday after he and Sen. Joni Ernst, R-Iowa, met with Trump at the White House.

A senior administration official said Monday that the Environmental Protection Agency will publish a rule to allow high-ethanol blends as part of a package of proposed changes to the ethanol mandate. The official spoke on condition of anonymity ahead of Trump's announcement.

The EPA currently bans the high-ethanol blend, called E15, during the summer because of concerns that it contributes to smog on hot days, a claim ethanol industry advocates say is unfounded.

In May, Republican senators, including Grassley, announced a tentative agreement with the White House to allow year-round E15 sales, but the EPA did not propose a formal rule change.

The senior administration official said the proposed rule intends to allow E15 sales next summer. Current regulations prevent retailers in much of the country from offering E15 from June 1 to Sept. 15.

Lifting the summer ban is expected to be coupled with new restrictions on trading biofuel credits that underpin the federal Renewable Fuel Standard, commonly known as the ethanol mandate. The law sets out how much corn-based ethanol and other renewable fuels refiners must blend into gasoline each year.

The Renewable Fuel Standard was intended to address global warming, reduce dependence on foreign oil and bolster the rural economy by requiring a steady increase in renewable fuels over time. The mandate has not worked as intended, and production levels of renewable fuels, mostly ethanol, routinely fail to reach minimum thresholds set in law.

The oil industry opposes year-round sales of E15, warning that high-ethanol gasoline can damage engines and fuel systems of older cars and motorcycles. Some carmakers have warned against high-ethanol blends, though EPA has approved use of E15 in all light-duty vehicles built since 2001.

A bipartisan group of lawmakers, many from oil-producing states, sent Trump a letter last week opposing expanded sales of high-ethanol gas. The lawmakers called the approach "misguided" and said it would do nothing to protect refinery jobs and "could hurt millions of consumers whose vehicles and equipment are not compatible with higher-ethanol blended gasoline."

The letter was signed by 16 Republicans and four Democrats, including Texas Sen. John Cornyn, the No. 2 Republican in the Senate, and Sen. John Barrasso, R-Wyo., chairman of the Senate Environment Committee.

A spokeswoman for the Renewable Fuels Association, an ethanol industry trade group, said allowing E15 to be sold year-round would give consumers greater access to clean, low-cost, higher-octane fuel while expanding market access for ethanol producers.

"The ability to sell E15 all year would also bring a significant boost to farmers across our country" and provide a significant economic boost to rural America, said spokeswoman Rachel Gantz.

If it weren't so ironically

If it weren't so ironically tragic this dispute between oil and ethanol producers would be funny. Both are problematic in their several and varied ways. We all know - even if we don't acknowledge, the threats fossil fuel poses to the climate. Ethanol - largely derived from corn - also has potentially catastrophic side effects. Vast acreages of corn - growing on soil impoverished by continuous applications of chemical fertilizers and drenched in herbicides and pesticides which sterilize the soil, and which runs off to poison our waterways and ground water? Ethanol "farmers" are turning America's breadbasket into a toxic wasteland in the service of another "cheap energy" delusion. The Great Plains once made America "Great" - never again; and we will be lucky not to turn it into another dust bowl desert.