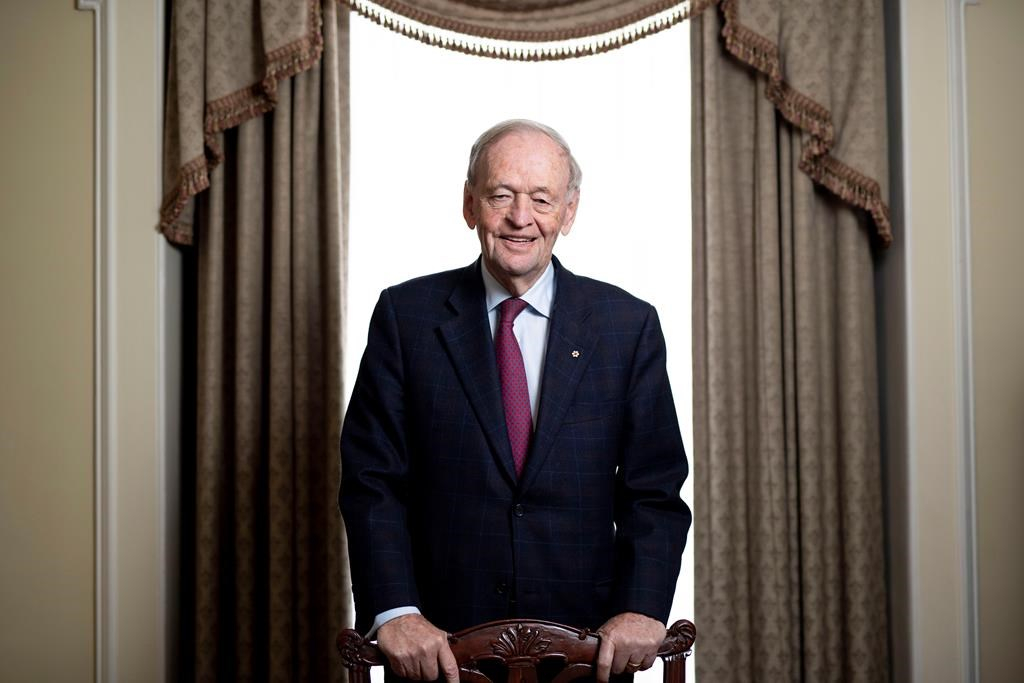 Former prime minister Jean Chretien is photographed as he promotes his new book in Ottawa on Friday, Oct. 5, 2018. File photo by The Canadian Press/Justin Tang
Previous story
Next story

Jean Chretien says Donald Trump is "unspeakable" and his rise to the U.S. presidency heralds the decline of the American empire.

Chretien unleashes that unflattering opinion of Trump in a new book of anecdotes from his 10 years as Canada's prime minister.

Although it's entitled "My Stories, My Times," Chretien, who retired from politics in 2003 after winning three majority mandates, does not shy away from opining on current events — most notably on Trump.

In the preface, Chretien says writing the book over the past year helped him recover his serenity when he got "tired of observing the surrealist vagaries of President Trump and of listening to his nonsense."

"It's been very sad to observe the monumental error our neighbours to the south made in November 2016," he writes in a later chapter, in which he recounts happy times he and his wife, Aline, have spent with former U.S. president Bill Clinton and his wife, Hillary, who was defeated by Trump.

"I fear that Hillary's defeat, and the arrival of the fanatical Trump, mark the true end of the American Empire. You can understand why Aline and I are so happy to have the Clintons as friends, and almost as proud to be removed as far as possible from the unspeakable Donald Trump."

Prime Minister Justin Trudeau — aware that it doesn't take much to set off the mercurial president, who is not above threatening to wreak economic "ruination" on Canada — has always been very guarded in speaking about Trump. But Chretien, now 84 and still active as a lawyer with Dentons, is not so constrained.

In an interview about his new book, Chretien elaborated on his view that the American empire is on the decline.

"You know, you see the emergence of the Chinese and the decline of America," he told The Canadian Press.

"When I'm travelling the world, I feel that their influence is going down very rapidly."

Chretien said the protectionist, America-first Trump administration is trying to break the international order "that has created prosperity around the world since the (1940s)" and is causing concern among traditional allies as the U.S. withdraws from the Iran denuclearization agreement, among other international pacts.

"If you want to be in isolation, that's fine. But you have less influence."

The rise and eventual fall of superpowers is natural and inevitable, Chretien added.

Chretien also weighed in on the renegotiation of the North American Free Trade Agreement, which Trump has renamed the United States-Mexico-Canada Agreement. The 14 months of tortuous negotiations and repeated threats by Trump to rip up NAFTA and impose ruinous auto tariffs on Canada turned out to be "a lot of talk for nothing," he said.

"He changed the name and not much else," Chretien said, adding that the NAFTA partners made "a little bit of an adjustment but basically we still have a free trade agreement with them that will work about the same way that it was working before."

In the book, Chretien says last year's white supremacist rally in Charlottesville, Va., "exposed to us the true face of Donald Trump."

The rally was staged ostensibly to protest the removal of Confederate symbols but white nationalists and other far-right extremists chanted racist and anti-Semitic slogans and carried guns and Nazi symbols. Violent clashes with counter-protesters erupted, leaving one woman dead.

Trump refused to explicitly denounce the white supremacists, choosing instead to condemn hatred and bigotry "on many sides" and claiming that there were "very fine people on both sides" of the clashes.

While Chretien writes that no country is immune to "backsliding where social values are concerned" and Canada must remain vigilant, he said in the interview that Canada has avoided the kind of polarization plaguing the U.S. because "we have much better institutions."

For example, he pointed to the heavily politicized appointment process for judges in the U.S., where the recent confirmation of Trump Supreme Court nominee Brett Kavanaugh became a circus amid accusations of sexual misconduct when he was a teenager. The judicial system in Canada has remained largely untouched by politicization.

"I never knew if the chief justice voted for me and I never asked her," Chretien said, referring Beverley McLachlin whom he named chief justice of the Supreme Court of Canada in 2000. She retired last December.